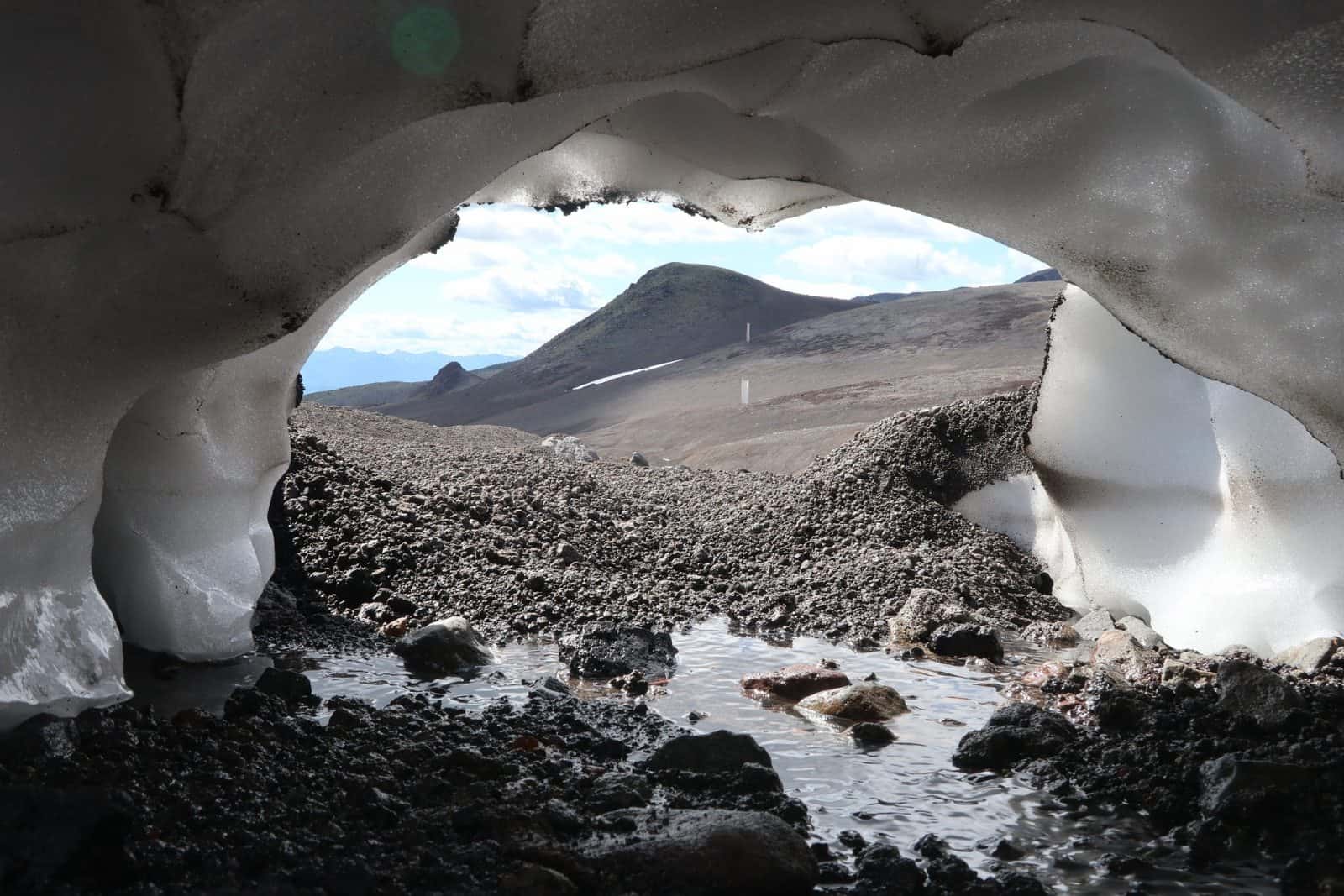 If you ever find yourself in desperate need of shelter while stuck in a wintry, snow-filled environment you could hardly do better when it comes to protecting yourself than excavating a snow cave.

Snow caves are reasonably simple shelters that are dug out of deep snow, usually at the base of a hill but sometimes into a standing drift. They are renowned for keeping survivors drastically warmer than they would be outside.

But how can something made of snow keep you warm? Is a snow cave warm or cold on the inside?

Yes, snow caves are freezing cold on the inside, but comparatively almost always much warmer than outside air temperatures, especially when factoring in wind chill. A typical snow cave will maintain a temperature of 30° F to 32° F (-1° C to0° C) if constructed properly.

Snow caves that might seem like an open and shut case of “desperate measures for desperate times” when it comes to surviving exposure, but these traditional, time honored and highly efficient shelters are fascinating and there is much more to learn about them if you want to make the most of them. We will share more with you below.

At it’s simplest, a snow cave is little more than a tunnel drilled into the side of a deep drift of snow. This will at least get you out of the wind. But a proper snow cave is surprisingly sophisticated.

An intelligently designed and constructed snow cave will feature a narrow entrance tunnel barely big enough to permit occupants to enter, this total typically being between 5 and 6 feet in length, before terminating in a small chamber with a domed roof.

This chamber is just big enough to allow two to four people room to sit or lie down inside, and features benches constructed out of compacted snow on the floor or cut from the interior walls.

The domed roof is strong enough to support the weight of snow above and is kept as low as possible in order to keep warm air that accumulates near the occupants, raising the overall temperature of the interior.

The chamber should also be installed on a slight incline above the entrance. The reason why is physics, as warm air rises and cold air sinks, meaning warm air should remain inside the chamber while the colder air floats down to the floor and hopefully out the entrance tunnel.

Depending on requirements and time, some will cut a narrow trench or shallow pit in the floor of the chamber to provide a sort of reservoir for cold air and allow a safe place for igniting a camp stove.

Snow caves are not a new invention, and have been used since time immemorial by many cultures around the world, and small-scale versions are even used by various animals that dwell in polar and arctic regions.

How Can Something Made from Snow be Warm?

At first, it might seem slightly surreal to take shelter in a structure made entirely from snow, which is obviously very cold, in order to protect yourself from snow and freezing cold air.

Your logic is sound, but you are likely forgetting about the insulated properties made possible by the compacted snow of the snow cave.

The entrance tunnel, walls, roof, benches and every other feature of the snow cave is excavated from snow with what is left behind being tamped or compacted slightly in order to provide greater strength to the structure.

This compressed snow is an excellent insulator, capable of holding a warmer quantity of air inside and is also an excellent windbreak so long as it is not blowing directly into the mouth of the entrance tunnel.

Believe it or not, even in absolutely frigid conditions with temperatures well below zero a properly constructed and properly cited snow cave can maintain an internal air temperature right around freezing, or 32° F (0° C) with occupants inside.

Now, freezing temperatures, you may be thinking, will still kill someone at risk of exposure and you are right, but when the temperature variation in the snow cave can be 40° F, 50° F or even 60° F higher (5° C, 10° C, or 15° C) than outside ambient air conditions, not including wind chill you should be able to see what a lifesaving advantage that a snow cave can provide.

Yes, occupants will still need proper clothes and preferably sleeping bags and other accoutrement to make best use of a snow cave but there is no comparison between taking shelter in a snow cave and risking it all in the blistering cold outside!

How to Keep as Warm as Possible in a Snow Cave

As you might have already guessed, you’ll still need to do what you can in order to warm yourself up while inside a snow cave.

Proper winter clothing is essentially mandatory, and if you have a proper camp or survival kit with a sleeping bag, blankets, ground pad and more you will be in even better shape. However, there are a few tricks of the trade when making the cave itself that can help you.

One great improvement is the aforementioned pit or trench cut into the middle of the snow caves floor. This will allow cold air to sink and hopefully flow out of the entrance tunnel.

As mentioned, this also makes a great place for a camp stove or a tiny fire, though you must be cautious and use ventilation holes if you are burning anything in or near your snow cave.

Another good improvement is the installation or excavation of raised benches, making them as high as can be easily accessed by the occupants.

Remember, warm air rises and the closer the occupants are to the ceiling where this warm air will accumulate the warmer they will stay, and the farther they will be from the cold air going in the opposite direction.

Also taking care, if you have time, to locate the snow cave in such a way that the entrance is not facing into the prevailing winds will prevent a chilling gust from being directed into your tiny shelter.

If this is not possible or there is no time to locate an appropriate site an antechamber or outer baffles can be built using blocks of snow in a right angle corner or zigzag pattern to help beat the wind and keep it from entering the snow cave.

Lastly, you can use your camp stove or make a tiny fire inside the snow cave so long as you are careful to prevent temperatures from rising so high that they weaken the structure of the cave itself. Remember, it is only made of snow and will melt!

As mentioned above, you must be exhaustingly cautious that there are adequate ventilation holes in the walls and ceiling of the cave to allow combustion byproducts out.

Becoming entombed in a collapsed snow cave is possible, but is unlikely to be a major hazard in most circumstances although this will leave you without shelter, of course.

Regarding the first hazard, the climbing temperature and moisture levels inside the snow cave resulting from human occupation and the attendant respiration and perspiration will lead to a thin glaze of ice forming over interior surfaces.

This ice precludes air from moving in or out of the snow cave easily and should the entrance tunnel become blocked by snowfall air quality can degrade rapidly inside the cave, particularly dangerous when occupants are asleep.

The second hazard usually occurs in emergency situations when someone is forced to dig a snow cave without the benefit of tools.

Even wearing gloves, even winter gloves, keeping your hands in contact with the snow for the several hours required to construct the snow cave can easily result in frostbite when the hands become wet from snow melt or perspiration.

Frostbite of the extremities is insidious and can cause damage before the sufferer is even aware of what is happening.

Snow caves are uniformly excellent winter survival shelters in any environment where snow is copious. Though their interiors will stay much warmer than the exterior air when constructed properly they are not warm inside in the truest sense of the word.

Still, no survivor or adventurer moving through frozen regions should go without knowledge of how to quickly and efficiently construct a snow cave.

1 thought on “Snow Caves: Are they Warm or Cold Inside?”