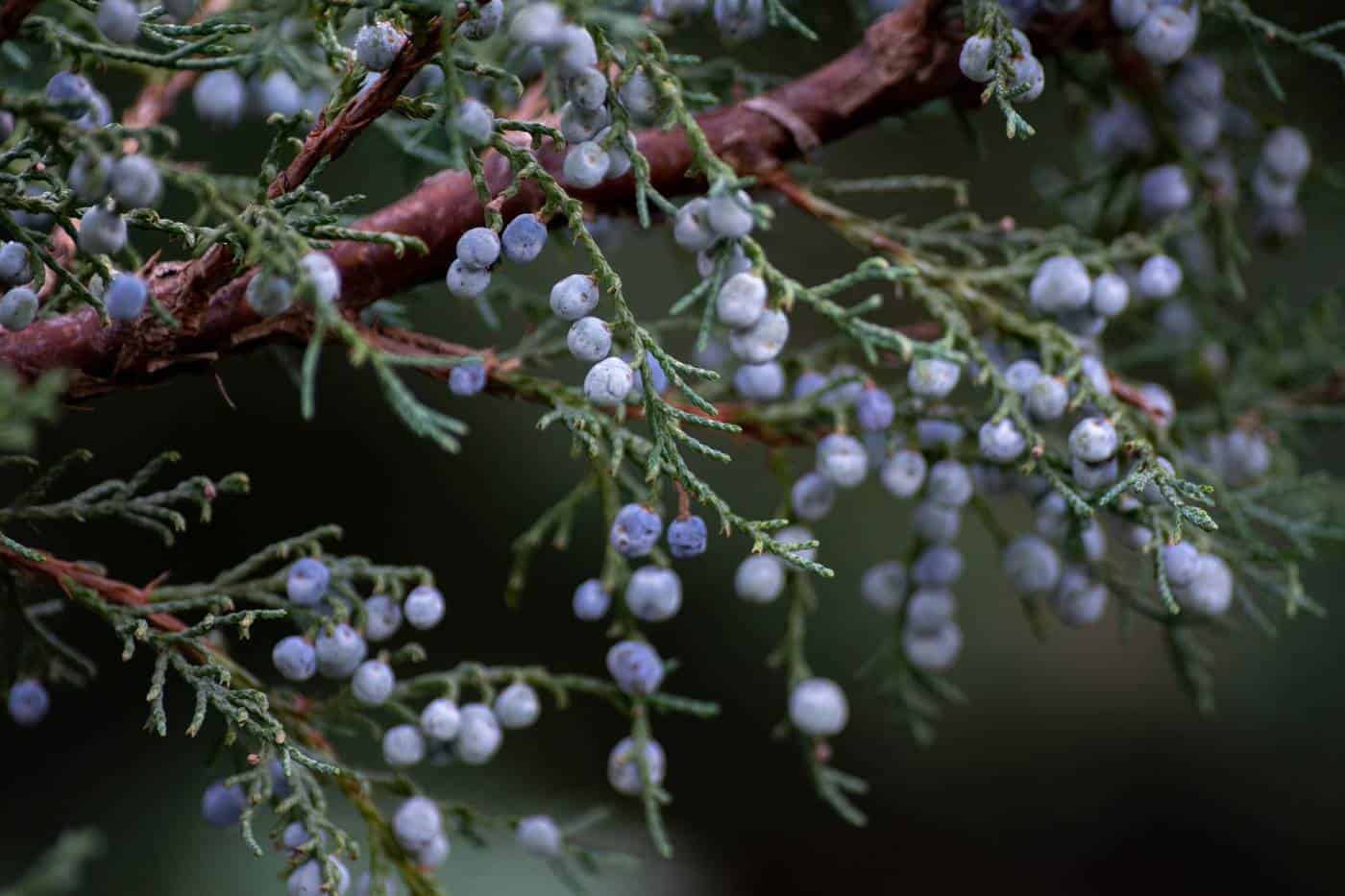 The juniper plant is one of the most widespread and hardiest that grows across the world. Ranging in shape from a tall tree to a low shrub, this versatile and adaptable species can be found anywhere from the frozen poles of the Arctic reaches all the way down through the blazing heat of Africa and Central America, and everywhere in between.

One standout feature of this remarkable plant is the juicy, luscious berries that grow alongside vibrant, green and decidedly slender leaves. Some sources claim these berries may be safely eaten. Others claim they are dangerous, so are juniper berries poisonous?

If you are dealing with a safe species of juniper, the berries are safe to eat. The toxicity varies greatly depending on the species. All juniper plants and their berries contain varying amounts of an oil, thujone, which is capable of causing significant stomach upset, diarrhea, vomiting, and kidney damage. Edible species of juniper berries contained very little of this toxic compound, while dangerous varieties contain much.

The juniper plant is not one you have to be afraid of, but you must know precisely what species you are dealing with.

Don’t worry, you are far from the first person to consider making use of those appealing looking, dark purple berries, as various cultures around the world have been doing just that for ages. Keep reading to learn more about this coniferous tree.

The juniper tree, or shrub, whatever you want to call it, is much like all other conifers in that it does not produce berries per se. It produces cones, and what we call a berry is actually a specially adapted cone that is grown by female examples of the species.

Unlike, say, a pine cone, the scales of the juniper cone remains soft and fleshy, growing together in such a way that they form a sphere and look for all the world like a juicy, delicious berry.

If you cut open or eat this berry, you will notice it has a peculiarly gritty texture but within you will find seeds very much like any other cone you would find growing on any other conifer.

Curiously, these specially adapted cones behave like genuine berries in other ways, particularly in their growth cycle.

Taking around a year and a half to reach maturity, even though they are fully grown before then, the berries of the juniper start out green and only near the end of their growth do they attain that richly purple or dark black coloring.

How do juniper berries taste? As you might expect these berries have a strong pine-like flavor, or resinous, gritty but have a decidedly citrus aroma and note.

Unfortunately, most folks do not eat the berries out of hand even when they are ripe as you might say they are definitely an acquired taste.

But be warned! You must not go out picking juniper berries willy-nilly even if you are in the middle of a desperate survival situation.

You might be able to get past the taste under the circumstances, but should you pick berries from the wrong species you’ll risk getting terribly sick or possibly even dying!

The key absolute when dealing with junipers and especially when considering harvesting and eating the berries or incorporating them in another dish is identifying precisely and certainly what species of the plant you are working with.

Bottom line up front: some species of the plant are safe, or at least grow berries that are safe to eat, and other varieties are dangerously toxic, tearing your guts up badly at best and leaving you crippled with horrible diarrhea.

The following species in particular must never, ever be interacted with and especially eaten from. Even handling the leaves and branches is enough to cause contact irritation in most people:

If you have any plans whatsoever of gathering or eating juniper berries, you must learn to positively identify both of the above species and avoid them at all costs.

Do not assume that they are not present in your region or in your local area: If one species of juniper is growing nearby others can also. It is also worth mentioning again that all parts of a juniper contain the hazardous oil thujone, berries, leaves, twigs, branches, and roots.

Lucky for us most species of juniper are not seriously toxic, and there are several which produce berries that are entirely safe, useful and even tasty when repurposed as an ingredient.

It should be noted though that since all juniper berries contain thujone gorging on them might be enough to give you an upset stomach or diarrhea, though it is unlikely anybody could eat enough in one sitting or regularly enough to cause serious illness.

The following species of juniper produce berries that are safe to eat:

Out of these species, Juniperus communis is the most common, and produces the berry that is most commonly incorporated into various beverages and dishes.

Juniperus californica is another good option, and is somewhat renowned for yielding a berry that is notably sweeter and more pleasant to eat compared to its relatives. Either is an excellent choice if edible juniper berries are what you seek!

Juniper berries have been used for ages in a variety of medicinal concoctions and cultural cuisine. Its most well known and arguably most famous use is in gin, a liquor which features juniper berries as the primary ingredient responsible for its distinctive, resinous and citrusy flavor.

Fun fact, it was originally first distilled in the middle of the 17th century by a Dutch physician who is trying to create a healing tonic. Gin has been ensconced in liquor cabinets across the world ever since.

Though the berries don’t taste very good by themselves when eating out of hand, the flavor tamps down when they are dried and they are often subsequently ground and incorporated in a variety of dishes. Throughout Europe, juniper berries are a popular cultural addition to various sauerkrauts, vinegars and other similar foods and the spice is also loved for its ability to cut through the overly gamey flavor of wild fare like boar, venison and various game birds.

The medicinal properties of juniper have been well known and utilized in various cultures around the world for a very long time. The berries in the form of a tea or tonic can be used to treat indigestion, sore throat, constipation and even to help stave off scurvy. Ground berries and their extractives are commonly used in cosmetics, ointments, saves and wound treatments along with the treatment of skin ailments.

We should perhaps give thanks to the common, misunderstood juniper for the useful berry it produces. Without it, regional cuisine wouldn’t be so distinctive and we also wouldn’t have gin, so there’s that.

Not all juniper berries are inherently toxic, though all juniper berries and plants contain varying amounts of the oil thujone which is capable of causing serious stomach problems, diarrhea and even damaging the kidneys in high amounts. It is essential that anyone considering gathering or eating juniper berries positively identifies what species of the tree they are dealing with so you can gather the berries with certainty that you will not poison yourself or someone else. Under all conditions, pregnant women and nursing mothers must avoid ingesting juniper berries so they do not harm their babies.