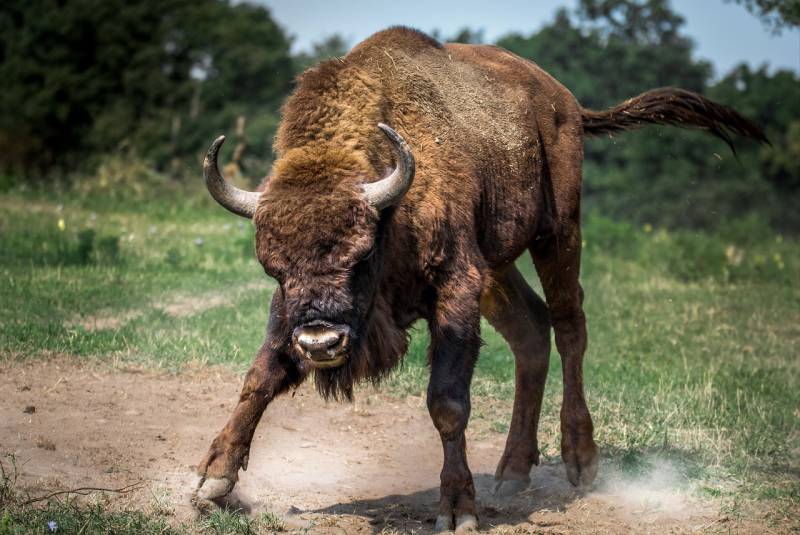 Have you ever seen a bison before? You might know them by their other name, buffalo. Whatever you call them, these huge, shaggy animals are one of North America’s most iconic species.

They’re one of the main attractions at many national parks, particularly Yellowstone, where teeming throngs of tourists and nature lovers line up to try to get a photo with the charming beasts. But that is the last thing you should do, as these huge critters are monumentally strong, and interactions with people in the wild usually end badly.

Are bison really that dangerous? Yes. The North American bison is one of the largest land mammals on the continent, and is possessed of both frightening strength and a surprising amount of speed and agility. When antagonized or defending young, bison can trample, gore, and generally smash humans with ease.

Just because bison appear sluggish, gentle and generally like big, fuzzy cows does not mean you can treat them with familiarity.

Wild animals must be treated with respect at all times, and when a particular wild animal weighs more than a short ton and stands six feet tall, you had better be on your best behavior.

You can learn more about bison and their potentially dangerous interactions with humans below.

Where Are Bison Encountered?

Once upon a time in North America, bison were encountered quite literally all over the place, with a natural range stretching from coast to coast as far North as present-day New England and as far south as the panhandle of Florida.

That isn’t the case in our era, obviously, because bison are only now making a big comeback after being hunted nearly to extinction.

Today, you’re only likely to encounter wild bison in one of our many national parks, particularly Yellowstone National Park, or in wild ranges where they have been reintroduced in number.

Considering how popular they are among all the many attractions in national parks, it is a bit surprising that there are not more bison encounters with people that result in a negative outcome.

Though hundreds of thousands of people view and admire them safely from a distance, there are still plenty of people who get too close to these impressively massive beasts, way too close.

Some bison are raised as livestock, generally for their meat, but excepting these instances where they are farmed or very rarely raised as massive, bovine pets, bison prefer not to interact with people out in the wild. When interactions do occur, they are usually frightening, and often injurious.

A bison will typically be enraged to attack when it is antagonized by the approach of a person. As with all wild animals, people should keep their distance, but they choose not to.

Coming too close for a selfie opportunity or, in some misguided attempt to make contact with the large and seemingly gentle bison the animal becomes frightened or territorial and attacks. More on that in a minute.

These animals are typically encountered in herds as most bovine creatures are, and compared to bears or other predators it is a rarity that a lone bison will be surprised or attack from ambush.

Males in the rutting season and females that are raising young are also particularly sensitive to intrusion. Whatever the case, misguided or foolish people who provoke a bison to attack will very likely find themselves in a life or death struggle. A very one-sided struggle…

All bison, at least the adults, have horns that are short, sturdy and pointy. These horns are not just for threat displays, or mating rituals. They work as intended, and are employed on defense as goring weapons, more than capable of skewering an adult human.

Compared to humans, bison are positively massive, standing at least 6 feet tall at the top of the shoulder, and weighing in excess of 1,700 pounds regularly.

Their tremendous size is often a surprise for those who have never seen them in person, but even people who have only seen them in pictures that will notice the slabs of muscle that typical examples of this species pack on.

This tremendous physical capability combined with their strength and size is even more dangerous because their typical behavior lulls their would-be victims into a false sense of security.

Bison appear to move around in a sluggish manner, meandering from place to place, grazing, or trotting along in a sizable herd while traveling.

Most bison are only active for a couple of hours at a time before settling down to rest or lounge the day away. How could such a placid and seemingly lazy beast pose such a threat?

As it turns out, when agitated or provoked to defense, a bison will prove frighteningly athletic, capable of tight, pinpoint maneuvering, tremendous acceleration and a high top speed that it can sustain for miles at a stretch.

Average bison can reach top speeds of 35 miles an hour on flat, level terrain, with speeds and excess of 40 miles an hour far from uncommon. Even an Olympic runner could not hope to get out of the way of a bison once it decides to charge.

Injuries typical of a bison attack include trampling, goring and slamming. Most victims come away with serious broken bones, organ damage, various internal injuries, and puncture wounds from the aforementioned horns.

Thankfully most bison run-ins are not fatal, but bison are more than capable of inflicting fatal damage. Take these big critters seriously!

Are Bison Really That Dangerous?

Are bison dangerous? Absolutely, I assert that they are. But in case you need more convincing, consider the data. Among wild animals, mammals in particular and mammals that are found overwhelmingly in our national parks extra particularly, bison are by far the most dangerous.

Even more concerning, they cause many more injuries, serious ones, compared to other large mammals that are traditionally encountered in such places like grizzly bears.

In fact, one 20 year study that collated all of the animal attacks occurring in and around our national parks determined that bison were responsible for more than three times as many injuries as bears were in the same time period, and caused pretty much an identical amount of deaths.

How can this be so? Bison are big, furry cows essentially, while grizzly bears are impressively deadly predators.

The reasoning is that people don’t take bison as seriously, despite their intimidating stature. Most people know enough to be justifiably afraid of bears, but since most people don’t fear cows, even ones with horns, people do stupid things in an attempt to get close to the bison or to touch them. This leads to provocation, and subsequently a defensive attack.

In short, all things being equal, you are far more likely to be injured by a bison than any other wild species of mammal.

As you might have predicted, all that is required to avoid a bad run-in with a burly bison in a bad mood is to simply avoid it. Keep your distance, don’t approach them and always give them a wide berth when they are on the move.

Bison don’t want anything to do with people in the wild, and the ones that do have probably been regrettably acclimatized to the presence of people and associate that presence with food. Chalk that up as reason number one why you shouldn’t feed the animals.

At any rate, so long as you do not get close to the bison they shouldn’t bother you and unprovoked attacks on people are exceedingly rare.

Also, if you are at a national park and notice bison that seem comfortable close to people, don’t assume and definitely don’t take it for granted; these are still wild animals, and if the animal is startled or angered by a noise, sudden movement or even a particular color the result is going to be pain and maiming.

In short, unless they are domesticated bison that have been raised by you personally don’t get close to these powerful and majestic beasts!

The North American bison is one of the largest and most impressive mammals on the continent, and though they presently have only a fraction of their historic numbers they remain a regular site in various national parks and other open areas of the country.

However, these massive and powerfully built animals are dangerous and must be treated with the respect that their size and strength demands. Close encounters with people usually end in tragedy. So long as you keep your distance you should not have much to fear.