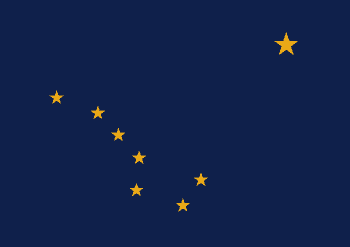 Alaska has a reputation as a rugged and mostly wild state, what might truly be called one of the last great frontiers in North America. This state is sparsely populated, vast and dangerous.

Many of the people who live there choose to rely on themselves or their small community and little else, and this rough-and-tumble living produces people that are known for self-reliance and getting things done no matter the situation. These ethics extend it to Alaska knife laws.

In Alaska, you can own and carry virtually any kind of knife you want with little in the way of restrictions. There are, however, certain requirements put upon people who carry knives when it comes to notification of law enforcement and the owner of a dwelling if you are carrying any kind of knife besides a common pocket knife.

Additionally, people who are under the age of 21 cannot carry any kind of knife except an ordinary pocket knife. We will have a look at the specific requirements and the laws pertinent to the carry of knives in Alaska below.

Alaska is a state or pretty much anything goes on knives so long as you are old enough to carry something more involved than a common pocket knife, and if you are carrying concealed you inform both law enforcement officers and the owners of any dwellings or residences you visit that you are carrying a knife that does not meet the definition of common pocketknife knife.

A particular regulation on the carry and ownership of knives is that a person who is not an emancipated minor under 16 years of age cannot be in possession of any switchblade or gravity knife without the express consent of their parent or guardian.

Concealed carry of knives is a simple affair in Alaska. You can carry any kind of knife you want concealed on or about your person with no permit required.

However, you have the duty to inform any law enforcement officer of its presence when contact is made with that officer, or you are specifically asked about it.

You then might have to secure the knife at their discretion, or allow them to do the same. Additionally, should you enter the home dwelling of someone else and are carrying a knife concealed, that does not meet the definition of a common pocket knife you must inform them of the fact also.

For anyone under the age of 21 you are not allowed to conceal any knife except a common pocket knife, though you are not forbidden from carrying any other such knife openly.

In both cases, Alaska specifically defined concealed as the following:

The only exceptions to this particular part of the law is if a person under the age of 21 is carrying a knife concealed when they are hunting, fishing or on property that they own or lease.

There are no particular changes to Alaska knife carry statutes if one does or does not have a concealed weapons permit.

Open carry is the norm in Alaska, with absolutely any kind of knife being allowed at anytime by persons aged 18 years or older.

As free a state as Alaska is, there still exists some restrictions on where you can carry your knives, openly or concealed.

Any school is off-limits, unless you have the explicit permission of the head official of the school. This includes both school property, and the school building itself.

Additionally, any vehicle owned or being used by the school for activities or trips is also forbidden. One does have the option of keeping your knife locked in the trunk or secure storage compartment of any vehicle or securely encased inside the cabin of the vehicle.

Of interest, Alaska does have comprehensive and potent preemption laws that prevent cities and municipalities from enacting and enforcing any knife regulations that are more stringent than the state laws.

Essentially you will only ever see local laws that mirror the state laws in effect if not an exact language. The state does reserve the right to borrow the carry of knives from any government buildings.

Alaska is an excellent state for knife ownership, and among the very best when it comes to carry laws. Any kind of knife pretty much anywhere you want to take it, carried openly or carried concealed, is a-okay.

People under the age of 21 cannot carry a knife concealed if it is not a common pocket knife, and you must notify law enforcement officers and homeowners of any knife you are carrying concealed, but other than that you won’t have any issues in the state.

You are always well advised to become intimately acquainted with state statutes yourself before taking any action that might see you in violation when it comes to weapons, knives certainly include.

Below you will find a selection of the most relevant Alaska state statutes pertaining to the carry and ownership of knives in the state.

(1) is 21 years of age or older and knowingly possesses a deadly weapon, other than an ordinary pocket knife or a defensive weapon,

(A) that is concealed on the person, and, when contacted by a peace officer, the person fails to

(i) immediately inform the peace officer of that possession; or

(3) being an unemancipated minor under 16 years of age, possesses a firearm, switchblade, or gravity knife without the consent of a parent or guardian of the minor;

(A) within the grounds of or on a parking lot immediately adjacent to an entity, other than a private residence, licensed as a child care facility under AS 47.32 or recognized by the federal government for the care of children, except that a person 21 years of age or older may possess an unloaded firearm in the trunk of a motor vehicle or encased in a closed container of a motor vehicle;

(i) courtroom or office of the Alaska Court System; or

(ii) courthouse that is occupied only by the Alaska Court System and other justice-related agencies; or

(C) within a domestic violence or sexual assault shelter that receives funding from the state;

(6) is less than 21 years of age and knowingly possesses a deadly weapon, other than an ordinary pocket knife or a defensive weapon, that is concealed on the person.

(b) In a prosecution under (a)(6) of this section, it is an affirmative defense that the defendant, at the time of possession, was

(2) actually engaged in lawful hunting, fishing, trapping, or other lawful outdoor activity that necessarily involves the carrying of a weapon for personal protection.

(c) The provisions of (a)(2) and (4) of this section do not apply to a peace officer acting within the scope and authority of the officer’s employment.

(h) In a prosecution

(1) under (a)(4)(B) of this section, it is a defense that the defendant, at the time of possession, was authorized to possess the firearm under a rule of court;

(2) under (a)(4)(C) of this section, it is a defense that the defendant, at the time of possession, was authorized in writing by the administrator of the shelter to possess the firearm.

(i) In (a)(1) of this section, “contacted by a peace officer” means stopped, detained, questioned, or addressed in person by the peace officer for an official purpose.

(j) Misconduct involving weapons in the fifth degree is a class B misdemeanor.

(7) other than a preschool, elementary, junior high, or secondary school student, knowingly possesses a deadly weapon or a defensive weapon, without the permission of the chief administrative officer of the school or district or the designee of the chief administrative officer, within the buildings of, on the grounds of, or on the school parking lot of a public or private preschool, elementary, junior high, or secondary school, on a school bus while being transported to or from school or a school-sponsored event, or while participating in a school-sponsored event, except that a person 21 years of age or older may possess

(B) a defensive weapon;

(8) being a preschool, elementary, junior high, or secondary school student, knowingly possesses a deadly weapon or a defensive weapon, within the buildings of, on the grounds of, or on the school parking lot of a public or private preschool, elementary, junior high, or secondary school, on a school bus while being transported to or from school or a school-sponsored event, or while participating in a school-sponsored event, except that a student may possess a deadly weapon, other than a firearm as defined under 18 U.S.C. 921, or a defensive weapon if the student has obtained the prior permission of the chief administrative officer of the school or district or the designee of the chief administrative officer for the possession.

(a) The authority to regulate firearms and knives is reserved to the state, and, except as specifically provided by statute, a municipality may not enact or enforce an ordinance regulating the possession, ownership, sale, transfer, use, carrying, transportation, licensing, taxation, or registration of firearms or knives.

(b) Municipalities may enact and enforce ordinances

(1) that are identical to state law and that have the same penalty as provided for by state law;

(2) restricting the discharge of firearms in any portion of their respective jurisdictions where there is a reasonable likelihood that people, domestic animals, or property will be jeopardized; ordinances enacted or enforced under this paragraph may not abridge the right of the individual guaranteed by art. I, sec. 19, Constitution of the State of Alaska, to bear arms in defense of self or others;