Recently, while perusing the older entries hidden in MSO, I stumbled across Rourke’s post regarding his recent acquisition of a Predator blowgun. He mentioned perhaps even taking a shot at squirrel hunting with it. Bad idea. Rourke may know many things, but blowguns aren’t one of them. I own seven blowguns in three different calibers. The Predator blowgun, like most blowguns you will find at flea markets, is .40 caliber. This is totally unacceptable for hunting. As humane dispatching of prey is paramount, allow me to present a quick breakdown of available blowgun calibers and darts. [Rourke: I have used blowguns for years and know them very well. I referenced trying to target a squirrel and mentioned that I would much rather have a pellet gun or a .22. I did not endorse the .40 cal Predator for squirrel hunting. Humane killing is unimportant in a survival situation.]

By far the most common caliber, these are little more than toys. (Note: they are still a dangerous toy. Do not point it at anyone!) Do not hunt with these, please! Cheap, easily found, good for practicing with. They are extremely fun to play with, and go great with a dart board or stuffed animals. Like most, a .40 caliber is what I started with. Shoot these in the house if you wish, the holes they make are smaller than pushpins. Which is the main issue – the darts are just too small. If you shoot a squirrel with one, it’s just like stabbing one with a long needle. This sucks for the squirrel, which will run away injured and possibly die in agony weeks later as the dart rusts inside him. I guess you could take down a small lizard, or maybe pin a beetle to a tree, but that’s about it. Sometimes these come in a two or three piece type, but the connectors are a weak point and usually leak air or do not hold it together well enough. 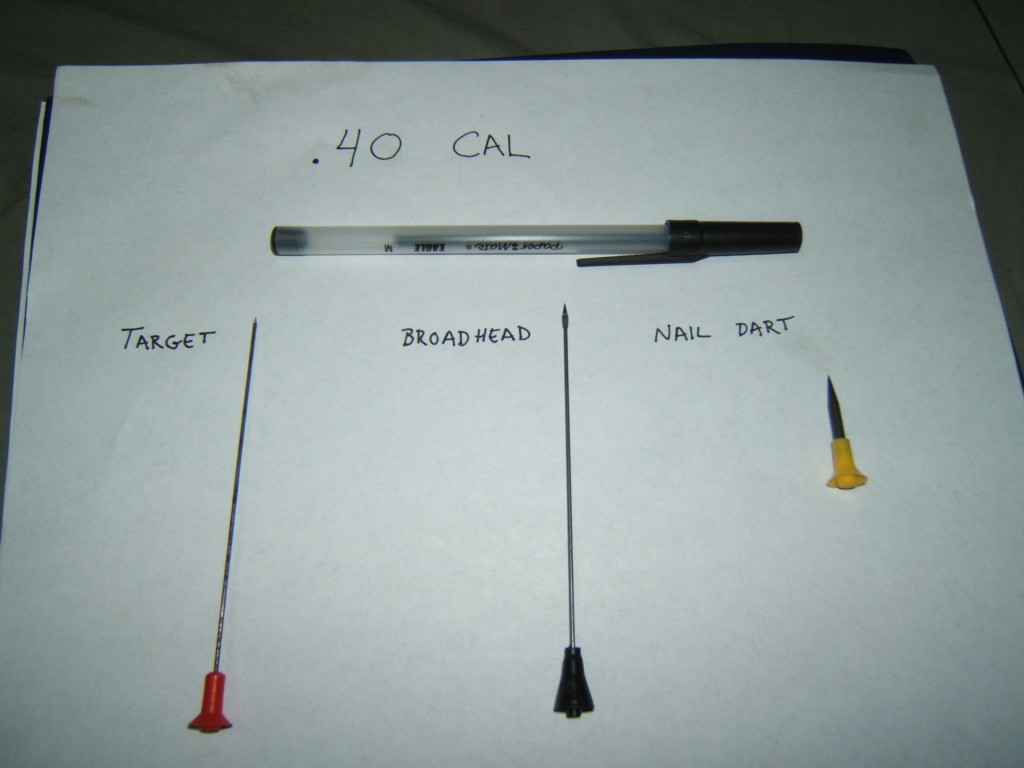 This is the minimum size for hunting anything. Squirrel is still out of your reach, except in the most favorable of lucky shots. Lizards, frogs, small birds are your targets. Many competition shooters consider this the most accurate caliber, and I will not disagree with them. Improved accuracy, speed of projectile, penetration and dart size are its strengths. The multi-piece models have the same drawbacks as the .40 caliber ones in all I’ve seen. 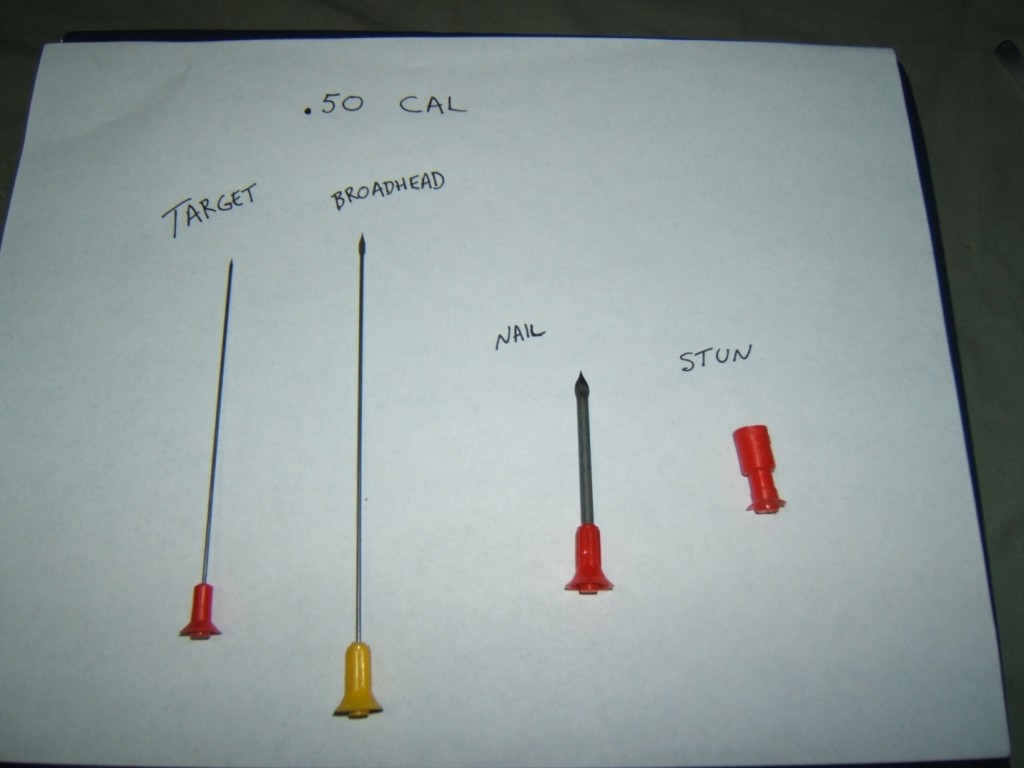 This is the largest caliber I know of sold commercially. I will showcase Cold Steel’s version as that is the one I own. They offer them in three models, the magnum, the takedown, and the professional. All are quality, but get the professional or the takedown. Unlike in the smaller calibers, the connector for the two pieces on the takedown model is fine threaded and works well. The professional model is made of much thicker tubing and is suitable as a walking staff. In fact, the mouthpiece is even designed to double as a handle and it includes a plastic piece to cover the business end (similar to a cane tip) while in that use. .625 darts are much larger and designed with hunting in mind. Target darts are not even available. Instead there is the mini-broadhead. This is the most versatile dart, accurate and can penetrate through ½ inch plywood.  Long bamboo darts for frogs and small fish, they fly straight and fast but lack penetration. Razor darts for larger prey. And then there’s the stun dart. This ‘dart’ is far more effective and useful than most of the real darts. Pure concussive force is the weapon here, and is fully capable of killing birds, squirrels, snakes, and all manner of small game with good shot placement.  I prefer it (if I could only have one…) over all the others for hunting. If you miss or fail to get a kill shot the projectile is easily retrieved, and not stuck up a tree. 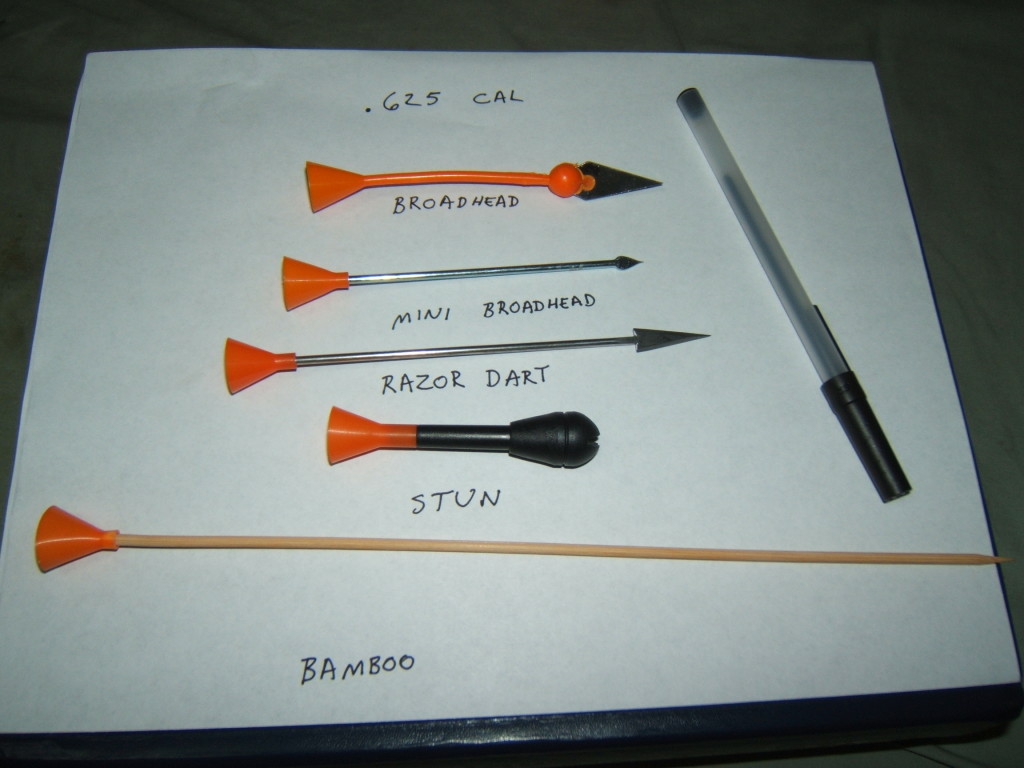 Avoid the broadhead darts (the plastic always comes bent and they never fly straight), as well as the gimmicky multi-dart (not shown). Stock up on mini-broadheads, stun darts, bamboo, and razor darts (if you can find them).

Be aware of a blowgun’s limitations. You will not take deer with one without illegal poisons. They do take some practice to master, although you will become proficient surprisingly fast. Practice is fun, cheap, and quiet. You WILL need pliers to remove darts from trees or wood targets. Hunting small game such as rabbit is possible but not easy. For survival hunting, go for the small, easy stuff. Birds, frogs, fish, snakes, lizards and the like will provide you with meat and are numerous and easy to kill. Perhaps the best attribute of a blowgun is the stealth aspect- unless someone is close enough to hear you breathe, they won’t hear you shoot, either.