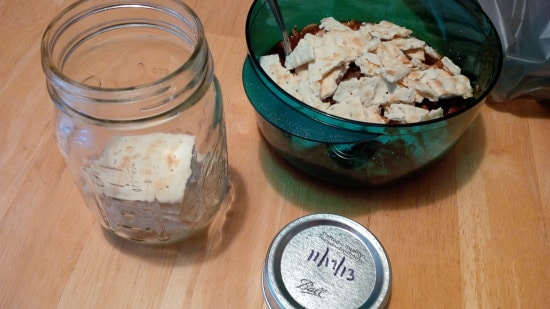 My wife made some no-bean chili the other night. Stuff is fantastic but I must have saltine crackers to go with it. She said we were out……EXCEPT those ones in the jars sitting in the cabinet.

She was referring to several jars of crackers that I had canned back in November of 2013. Would they still be crisp and taste good after 9 month? My wife said I was insane for eating crackers that old. I unscrewed the ring and pulled up on the tightly held lid – and air rushed in making that “thwish!!” sound. Of course I called my 15 year old son over as my test subject. Knowing Jonathan will eat anything I shoved a cracker in his mouth and watched for his reaction.

I tried one myself and found it to be just like new out of the box. Crisp and tasted great.

Just so you know I got the idea for dry canning crackers from this video on YouTube.

I know – this is expensive but the reality is it is a method for storing what is essentially bread for the long term. I have a few other jars and will test them some time in the future. I also just bought some jars on sale so I may try canning some more.