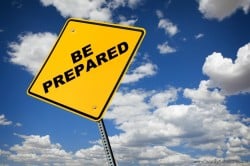 Have you ever thought to yourself, “This country has lost its moral core”?  Do you believe that because of liberal influences and a misguided Supreme Court we now live in a country that has Freedom FROM Religion, rather than Freedom OF Religion?  If so, you are not alone.  For many years I have noticed the decay of our society.  Many in our nation no longer believe that you need only to apply yourself to succeed.  They believe that the little man just can’t get ahead.  The “rich” are keeping them down.  The “rich” are to blame.  THE RICH OWE ME!  They have forgotten the biblical principles that our founders held dear.  Indeed we now live in a nation which our current President has declared “ . . .is no longer a Christian nation”.

So what does this have to do with why I prepare?  Because I believe, as did our first president, that “we ought to be no less persuaded that the propitious smiles of Heaven, can never be expected on a nation that disregards the eternal rules of order and right, which Heaven itself has ordained”.  George Washington wrote these words in his first inaugural address.  (http://www.archives.gov/exhibits/american_originals/inaugtxt.html) Those who study history understand that he did indeed write these words.  His inaugural address was never delivered as a speech, but rather published so that citizens across our nation could, in a time when the immediacy of television did not exist, know the mind of our President.  How different is this from the attitude of President Obama.  George Washington’s first inaugural address gave praise “to that Almighty Being who rules over the Universe, who presides in the Councils of Nations, and whose providential aids can supply every human defect”.  How far we have fallen?   Where once we were a nation whose President believed that “No People can be bound to acknowledge and adore the invisible hand, which conducts the Affairs of men more than the People of the United States.”, we are now a nation who’s President has proclaimed that “American is no longer a Christian nation”.  http://www.youtube.com/watch?v=tmC3IevZiik

So again, what does this have to do with why I prepare?  I prepare because I believe that those who do not learn from history are condemned to repeat it.  I prepare because I believe that “All Scripture is breathed out by God and profitable for teaching, for reproof, for correction, and for training in righteousness, (2 Timothy 3:16 ESV).  The Old Testament, being not only the word of God, but also the history of his chosen people, records numerous times that God allowed the people of Israel to be placed in bondage to others.  In each case they had turned from God and begun to worship other “gods” and idols.  If we believe, as did George Washington, that God smiled upon this nation, a nation founded upon Christian ideals, by those seeking the freedom to worship God, then we should be fearful that we too can be struck down as a nation.  As a nation we have removed God from our schools and our public places.  As a nation we embrace “Choice” over the sanctity of the lives of our unborn children.  Psalm 127:3 tells us “Behold, children are a heritage from the LORD, the fruit of the womb a reward.”  Yet, many sacrifice this reward from God on the altar of “Choice”.  They view this reward as burden that must be removed.

Recently I read the book The Harbinger.  Through a narrative style the author lays out strong parallels between the prophecies of Isaiah and modern day events.  He describes how God sent warnings to his people in an attempt to get them to turn back to faith in God.  They did not heed these warnings and once again God allowed Israel to be conquered.  It crystallized for me my concerns over the moral decline of our nation.   So why do I prepare?  I prepare, because in a nation that no longer loves God and fears his wrath, I still do.

Go to the ant, O sluggard;

consider her ways, and be wise.

Without having any chief,

she prepares her bread in summer

and gathers her food in harvest.

How long will you lie there, O sluggard?

When will you arise from your sleep?

A little sleep, a little slumber,

a little folding of the hands to rest,

and poverty will come upon you like a robber,

7 thoughts on “Why do I Prepare…….. by Blueridgeprepper1”