Back when I was growing up, we were poor like many other families. I remember the night my mother and father were sitting in front of our only black and white TV, watching President John F. Kennedy make his now famous speech on the Cuban Missile Crisis. He was telling the Soviet Union to take the nuclear missiles out of Cuba. I could tell that something was wrong just by the intensity my parents were listening to that TV broadcast. At that time I was too young to understand what was going on. When President Kennedy finished that speech, my father looked at my mother and told her to get ready because we were going to the grocery store. My mother did not say a word. She told me and my two younger brothers to go get ready. Then she got dressed. We arrived at the local A & P Grocery store shortly after. My father told my mother to start buying enough food that did not need to be refrigerated to last us two weeks. My brothers and I had no idea what was going on but we knew better than to question our father in public.

When we got home, we unpacked everything from the car. Upon completing the unpacking and bringing all of the groceries inside, I asked my father what was going on. We walked outside because he did not want to alarm my two younger brothers. He then explained that he believed, according to what he heard President Kennedy say, that we may be going to nuclear war. I will never forget that evening.

We now know that two weeks of food would not even come close to what would be needed for a family of five if we had gone to war with the then Soviet Union. It would have been years, if ever, before the nation recovered so that we could go back to the grocery store.

Years passed, I grew up and started a family of my own. During that time, we had numerous other hurricanes hit the southeast Louisiana area. I decided to become, what was called in those days, a “Survivalist”. Now we are called “Preppers”.

Then one day, the National Weather Service advised us that a monster hurricane named “Katrina” was going hit and devastate the New Orleans area. Unlike my father, I did not need to go to the grocery store because I had stockpiled enough food, water, etc. to survive for a long time. It turned out that F.E.M.A.s lack of response made my supplies invaluable. Do you remember the pictures of the thousands of people in the New Orleans Super Dome and the New Orleans Convention Center? They did not have anything to drink or eat because of F.E.M.A.s lack of response.

Now the local disaster preparedness people tell us in southeast Louisiana to have enough food, water and supplies for at least two weeks at the beginning of every hurricane season.

However, now we are starting to be considered “Terrorist”!

How is that possible?

If you do not believe me, cut and paste the below address into your web browser. Read the article but be sure to view the video!

The below flyer was placed on the front window of an Army Surplus Store in New York. 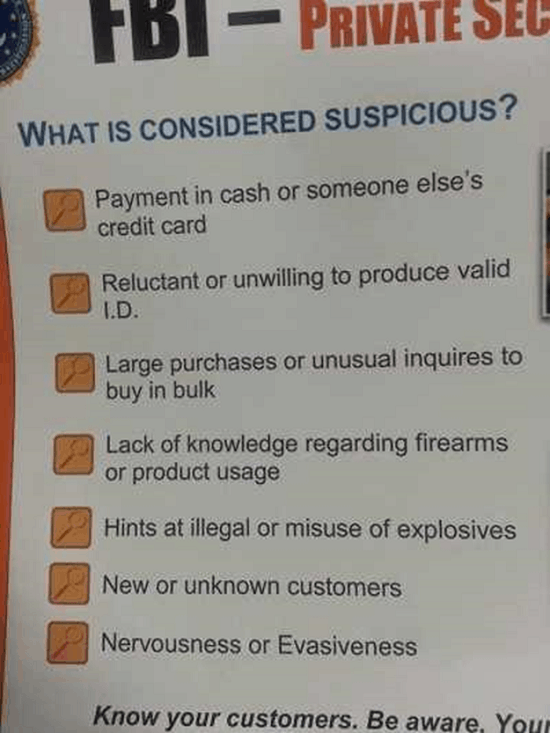 The last time I checked we lived in the United States of America. We HAD a document called the U.S Constitution, the Bill of Rights. We were guaranteed certain rights; you know, the freedom of speech, to bear arms, a warrantless search and the right to pursue happiness.

We continue to give up our rights every time one of our leaders, Democrat and Republican, say that by giving up a certain right they can make us safer.

What will it take for the American citizens to wake up?

“Those who would give up essential liberty to purchase a little temporary safety deserve neither liberty nor safety.”

9 thoughts on “What will it take?”