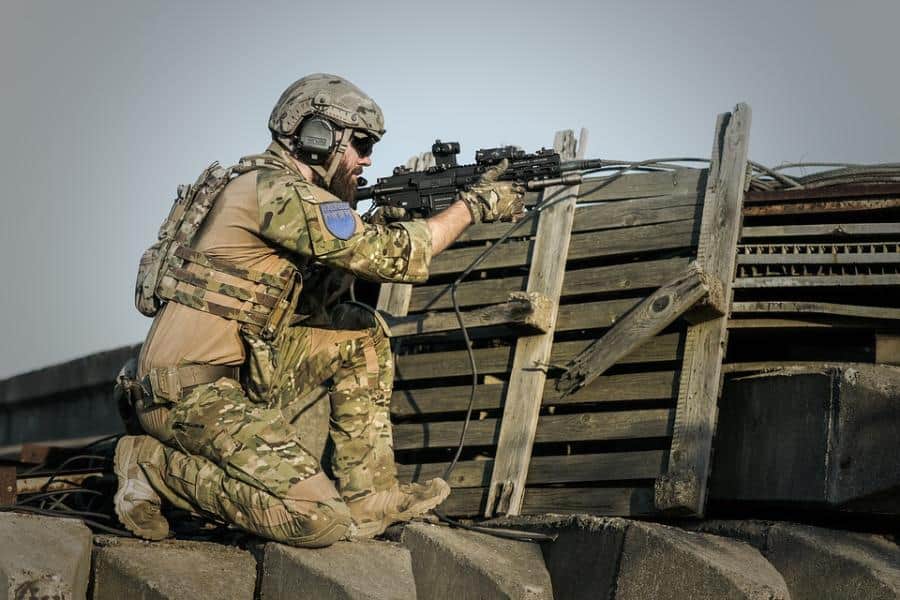 Deterrence is about striking fear in your enemy, causing them to doubt, hesitate, and change or stay their plans. It is the message that aggression will be answered with force, and the losses sustained will make a victory impossible, or too difficult and costly to justify.

Deterrence works on all levels from the individual as well as international level.  The ninth grader who starts lifting weights, working on their appearance and social skills, and making friends will less likely to be bullied. The nation with a strong military, a united populace, a strong economy, and loyal economic partners and allies will deter invasion of their sovereign territory, or actions against their national interests.

There are those on the far left who have no will to defend our nation. They advocate not only military reduction, but the most extreme of them want to eliminate the military.  Wouldn’t it be a wonderful world they say? They are apparently intent on national suicide by leaving our nation wide open to our enemies.  They hold beliefs which have no basis in reality. Have you ever heard these empty and absurd platitudes espoused by the liberals?

Here are some of the realities and likely outcomes with these bits of bumper sticker wisdom:

The Concept of Deterrence

When Obama was in office:

This was the result of a President who did not project strength. Human beings are predatory. This is not an abstract academic theory, but rather an observation of human history. The weak are overtaken and dominated by the strong. If you are weak, you will be at the mercy of the strong.

This dynamic is played out on all levels, from individual to international. In correctional facilities, older, more physically powerful and socially connected inmates dominate the smaller, weaker inmates through force and threat of force.

The weaker inmates are intimidated, coerced, beaten, raped, robbed, killed or used as desired. In middle school, the timid, skinny kids, who are socially awkward or stand out in the crowd in some way will be subjected to power, control and domination games played by their more developed and confident peers.

Throughout history, larger, more powerful and more technologically advanced nations have dominated smaller, weaker less advanced civilizations. Weaker nations ally themselves with each other or stronger nations with common interests to gain power, economic strength, and resist acts of aggression. To ignore the reality and necessity of deterrence through the threat of force is beyond naive; it is ignoring the lessons of thousand years of history, and can have disastrous consequences.

The Value of Deterrence

The purpose of deterrence is to maintain as much peace and stability as possible in a very imperfect world.  Peace is best sought from a position of strength; otherwise negotiating can be reduced to begging for mercy.

The mutual threat of destruction or denial of victory can induce an enemy to consider alternatives to aggression and compromise. A strong military, and leaders with the fortitude to use it if necessary is a way to maintain peace without actually going to war.

The Limitations of Deterrence

Deterrence is one strategy for ensuring peace and national security among many. The underlying premise of deterrence is that the opposing party is rational, and interested in self-preservation.  This shortcoming of deterrence can be seen in the high rates of recidivism among habitual criminal offenders, who care little about being incarcerated.

Deterrence is also predicated on the credibility of the defender, and the defender’s will to fight. Under the Obama administration, as Dinesh D’Souza predicted, our enemies were emboldened, the United States military was weakened, and we were alienated from our allies. Deterrence is of limited value against those who fervently follow the belief that they will be martyrs, with a heavenly reward for giving their lives to kill the infidels. See more about religiously motivated terrorists and deterrence in the video below.

There will always be matters beyond our control, and others that are within our grasp. Ask yourself what you can do, and take action, whether you are a private citizen, legislator, or policy maker. Considerations for a strong America include:

America’s power contributes much to world peace. The “tolerant and peace-loving” (?) pacifist crowd is not operating in the real world. If a nation lays down its arms, it will be open to victimization. A weak military will encourage our enemies to act out aggression.