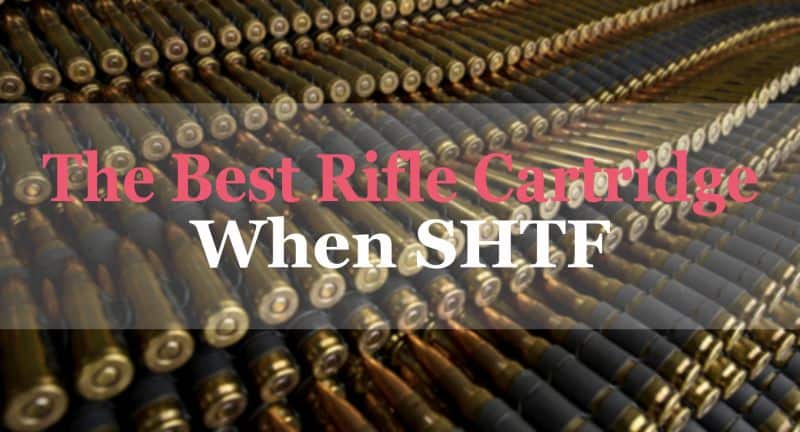 by a guest contributor

The AR 15 has a reputation as a SHTF firearm, and while there is a reason for this reputation, a lot of us forget exactly why it’s one of the better options. We stock up on the 5.56×45 NATO and the tactical rifles that are chambered for this cartridge, and we can tell you why we believe it’s the best SHTF rifle cartridge out there.

Before we jump into the meat of the article, we do want to point out that there is no one all around, godsend, holy-grail of a cartridge out there. While we have gone with the 5.56×45 round, we are in no way downplaying the effectiveness of other combat rifles or even hunting rifle cartridges. At some point, you just have to make a choice and have the facts to back it up.

In this article we are going to look at several performance categories and compare the data from five 5.56×45 rounds. Below are five rounds that we have selected for looking at these categories. This is a small sample size for the options that are out there but will give us a look at what this cartridge can do.

While having ammo stocked away somewhere might make this section irrelevant for some, the lighter weight of the 5.56×45 NATO compared to other cartridges is important to note.

If you’re having to go on the move for a few days or haul out somewhere quickly, these lightweight rounds are going to allow you to carry much more ammo without being fatiguing. In survival situations, cutting down on unnecessary weight and reducing the amount of fatigue can be a major factor in staying alive.

The effective range of a cartridge, especially one to be used in survival situations, is extremely important. From CQB to shots at several hundred yards, a go-to SHTF rifle cartridge needs to have the capabilities for all of these ranges. While up close and personal isn’t an issue for most rifle cartridges, not all shots are going to be at 25 yards. If you are put in a position where you have to take shots at 50 to 200 yards, are you going to be confident in taking the shot?

Using our selected rounds, let’s take a look at the short range trajectory measuring bullet drop (in inches) over the course of the bullet’s flight. 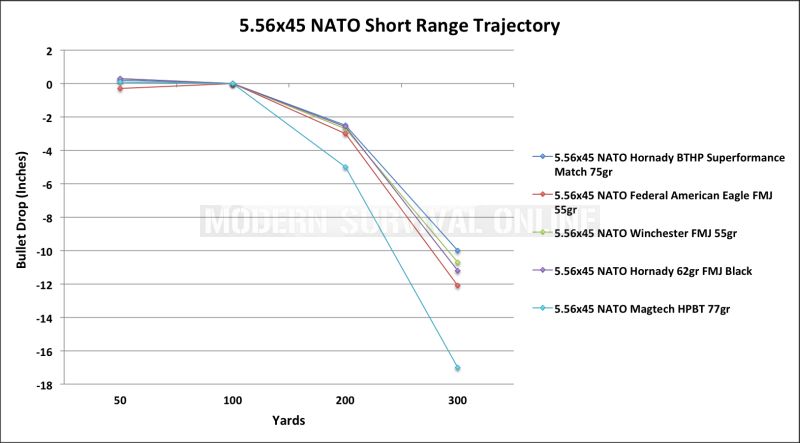 Most 5.56×45 ammunition you go with can handle shots out to 100 yards. If you have good optics, you can even extend that range with the flat trajectory of this cartridge. The heavier bullets are going to take some more adjustments.

But what about extended ranges? 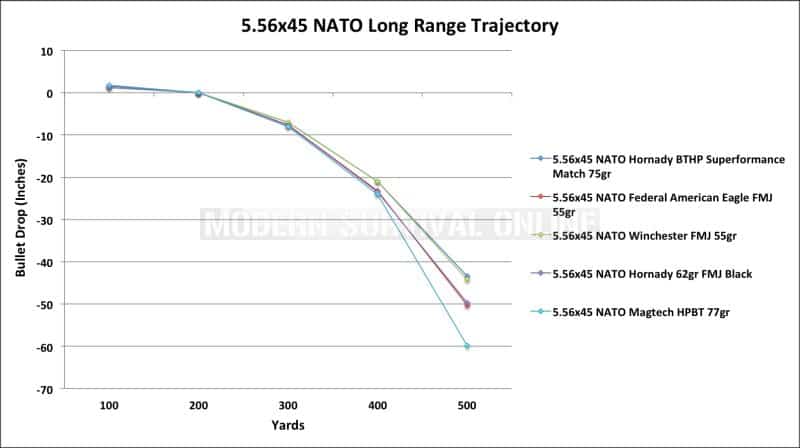 The trajectory for the 5.56×45 rounds and the cartridge as a whole is still relatively flat out to 300 yards. Once you get into the 400-yard range, you are looking at some heavy adjustments to shot placement while 500 yards is tough shooting for just about anyone. However, if you compare the trajectory of the 5.56×45 vs the 7.62×39, the latter just shows too much bullet drop to even be an effective round out past the 300-yard mark, which is one of the reasons we picked the 5.56×45 for this article.

Of course, none of this matters if the bullet doesn’t have any pop behind it.

When things go south, and you are fighting for survival, the opportunity might arise that you have to protect your own or you must go out and hunt for food. Both of them require a cartridge that is going to be able to provide enough stopping power to deter and kill targets.

Stopping power encompasses several different factors such as the energy associated with the bullet traveling downrange, the bullet’s penetration, and the wound created. In this section, we will take a look at our selected 5.56×45 rounds and discuss how their kinetic energies make them a viable cartridge when SHTF.

Like the trajectories, we are following the bullets from the muzzle out to 500 yards. 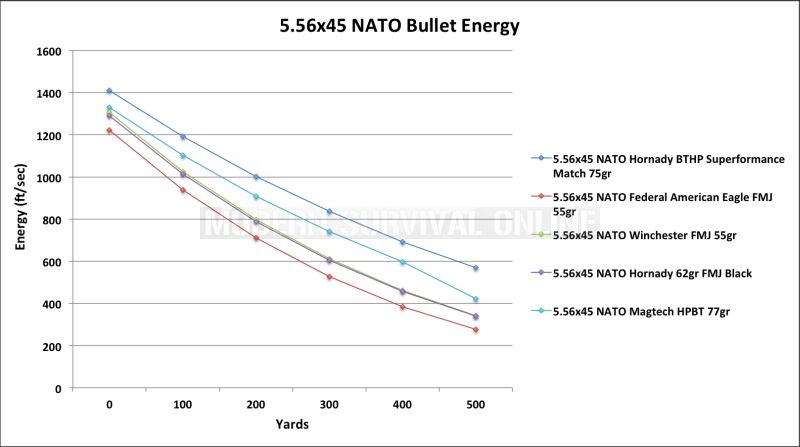 What we are measuring is the force (ft.lbs) that is associated with the bullet and will be transferred to the target on impact.

While there are more deadly cartridges on the market, these 5.56×45 rounds are carrying over a 1,000ft.lbs of force at 50 and 100 yards where the vast majority of shots are going to fall. Even out past these ranges we are still talking about 500-800 at 400 yards.

Most criticism for the 5.56×45 is that it loses its effectiveness at distances out past 100 yards. And yes, they drop off, but 700ft.lbs of force slamming into is going to make you turn the other way, and we can’t be told otherwise.

The low recoil of this cartridge provides the biggest reason we like the 5.56×45 cartridge for when SHTF. Take a look at the recoil of the five 5.56×45 NATO rounds we have been looking at. 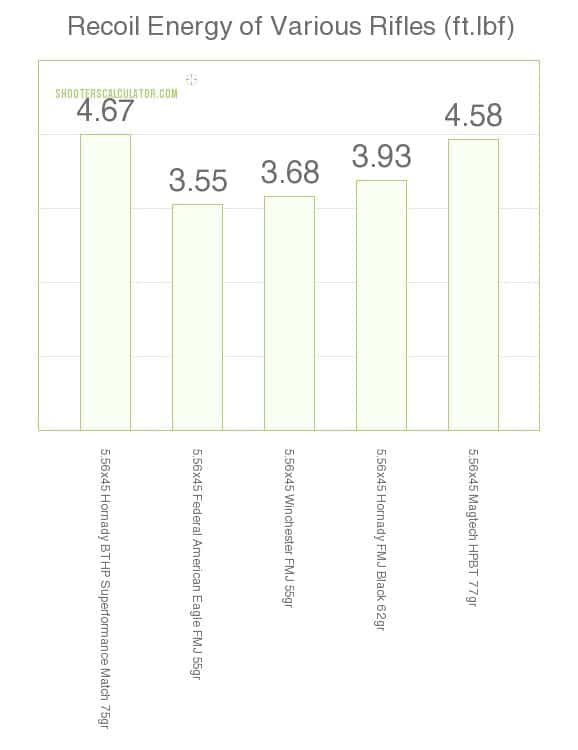 All of the 5.56×45 rounds we have selected and most factory loads have less than 10ft.lbs of recoil energy generated when firing. What this means in our eyes is you have a firearm that can be handled easily in close quarters and can be fired in semi-auto or auto for successive shots without losing too much accuracy. That’s a game changer for survival situations.

Look, you can read all the blogs you want of some guys groupings, but the simple fact is that accuracy depends so much more on the shooter than on the equipment. While your firearm, optics, and the cartridge itself needs to be of high enough quality to perform reliably, most factory loads are going to perform as well as the rifle operator is trained.

The 5.56×45 has minimal recoil compared to other cartridges used for similar purposes, short range trajectory is relatively flat, and even long range trajectory is manageable with a high-quality scope that has been sighted correctly. With some time on the range, the 5.56×45 cartridge’s bullet is going to go where you put it.

Below, we have listed some of the retail prices for the rounds that we looked at in this article. As you can see, it can be expensive, or it can be relatively cheap. These rounds can often be found in bulk quantities as well. What matters is that you are compiling a stock of ammunition that you are comfortable and confident in and that will fit your shooting situation.

Availability, as most of us have experienced, can swing one way or the other pretty wildly depending on a lot of outside influences. For right now, things are looking good, and you should not have any problems getting your hands on the specific round you need. With that, things can shift any day so don’t put off stocking up for too long.

We don’t believe there is a perfect round, especially when SHTF. There are cartridges that have better performance characteristics for certain situations. The 5.56×45 cartridge, while an excellent self-defense round for when things go south, it does have its weaknesses when compared to other cartridges.

It does not have the stopping power of other cartridges used on the AR platform and other high powered rifles. This, of course, means you get some of the better qualities of the 5.56×45 that we have discussed earlier. For possible intruders, it’s got enough force behind it to dispatch, incapacitate, and at the least deter unwanted guests.

Where it falls short is in the big game hunting category, especially at distances of 200 yards or more. When SHTF, sooner or later hunting is going to be a factor in your ability to survive. Small game and even deer within 100 yards are still possible. With the right shot, you might even be able to take deer a bit further than 100 yards without having to spend the day or night tracking a wounded animal. For anything larger, the 5.56×45 just falls short compared to other cartridge options.

Like we stated at the beginning, there are plenty of cartridges available that are viable options. What we hope is that we presented the case for the 5.56×45 NATO round as a go to rifle cartridge for when SHTF.

Its low recoil makes it fabulous for handling in tight situations, it has a flat trajectory that allows you a wide range of shots and has the knockdown power to bring down targets within 200 yards and at the minimum deter them at increased distances. It’s readily available ammunition, and we think that if you give it a go, you might find you have a new favorite cartridge to stock up on.