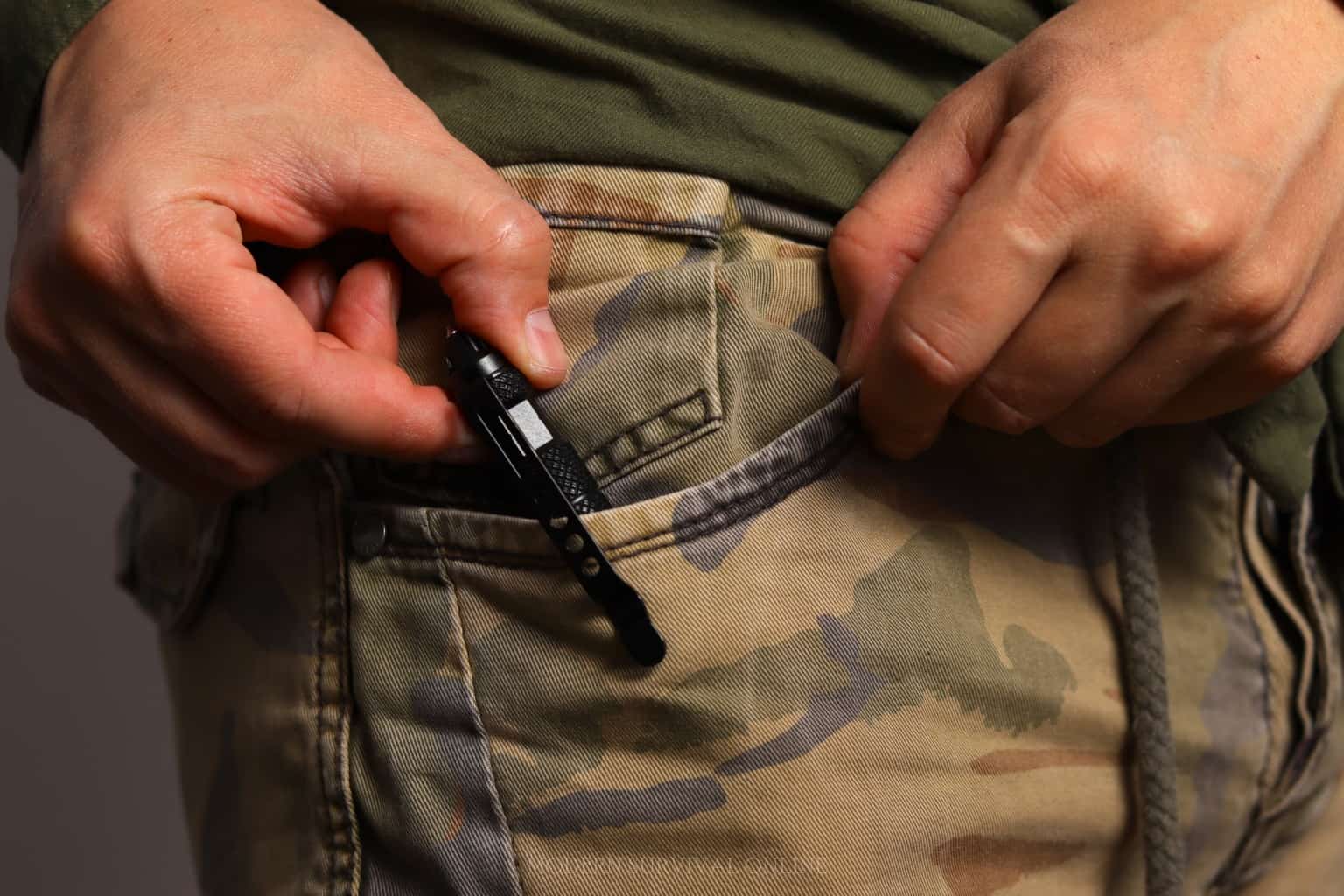 The best items for your everyday carry kit are items that are hidden in plain sight.  Items that you can use in your everyday life allow you to expand your kit without having to keep that item concealed.

Even airlines will often let you carry your tactical pen.  They are great for stabbing at vulnerable points like the neck and eyes.  However, they also allow you to target pressure points for non-lethal force.

Why a Tactical Pen?

There are several reasons that a tactical pen could be a better option than other concealable weapons.

How to Choose a Tactical Pen

When choosing a tactical pen, there are several variables to consider.  Most people only own one tactical pen, so it is important that you pick the right one.  Here are some points to think about when choosing your pen:

Material – Tactical pens are typically made of one solid piece of metal.  Unlike a normal pen, they are designed to take an impact without bending or breaking.  Most are made with aircraft grade aluminum, but some are even made from titanium.  The strength of your pen will be based on the material type and design.

Grip – With a pen being small and cylindrical, is could easily slip out of your hand after impact.  A good tactical pen will have design elements to prevent it from slipping.  Some have ridges designed to fall in between your fingers for a better grip, while others are tapered in the middle and fatter on the ends.  Ideally, you want some sort of design element to improve your grip.

Appearance – If a tactical pen looks too different from a normal pen, it defeats the purpose.  You want it to completely blend in.  If it is obviously a weapon or tool, other people are that much more likely to try to take it from you.

Function – Any tactical pen should have a sharp point for stabbing, but some are so much more.  These days you can buy tactical pens with glass breakers, fire starters, whistles, and styluses.

Some even have flashlights built in to the pen.  The newer models have DNA catchers to allow police to identify your attacker after the attack is over.  The more functions your tactical pen can cover, the fewer items you need in your EDC kit.

Here are a few quality models that you can consider purchasing:

How to Use a Tactical Pen

If you are attacked, there are specific points to target on the human body.  The tactical pen is not a knife or sword.  You cannot just swing it at an assailant and defend yourself.  You have to be surgical.  If you hit the right points, you will easily disable your attacker.

The key to this strategy is multiple strikes.  When you find a point of impact, hit it several times before you back off and try to escape. This will ensure that your attacker stays down.

Once you have selected your tactical pen, take the time to practice with it.  It is important that you are comfortable targeting these specific areas when the pressure is on.

It is one thing to know the areas to target, but another thing to be able to act swiftly when attacked.  Practicing in low lighting or with the sun in your eyes is also a good idea.

In addition to practicing where to strike, it is also important that you practice how to strike.  Tactical pens can be held like a sword for thrusting forward, or they can be held backhanded for a downward stabbing motion.  In most cases, sword style will give you more accuracy with your strikes.

Your attacker is also less likely to block this type of movement. However, each tactical pen has a different shape and grip.  You may decide that your pen works best by holding it a different way.  It is important that you can stab a solid, heavy object without the pen slipping or dislodging.

Also, while practicing, remember that your best move is to stab repeatedly at one particular spot. This means that your grip has to allow you to keep making the same motion without it slipping.

In most cases, you do not want to stop making contact until your attacker is on the ground or disabled in some other way.

However, at that point it is best to run for help.  Legally speaking, you can be charged with assault if you keep striking after your assailant is obviously disabled.

Do what is needed to get away and then make a run for it.  If you have hit the right spots, you should have no problem getting to safety.