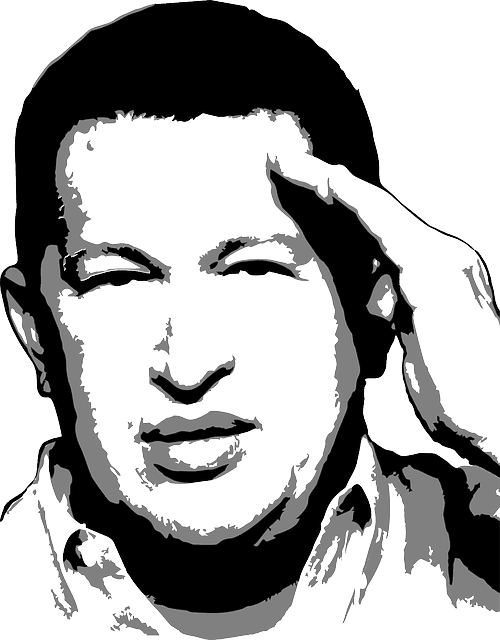 The devastating crisis in Venezuela has been going on for years, though mostly below the fold of our nation’s mainstream newspapers and websites. And as the citizens of this once prosperous, oil-rich nation are literally running out of trash to rummage through for sustenance, leftist celebrities who once praised the socialist government of Hugo Chavez are strangely silent.

A few decades ago, the enigmatic Chavez was promising to reserve the great wealth of Venezuela’s oil reserves for the poor, the people he identified with and vowed to help. He was praised around the world for his cutting-edge economic plan and being a champion of the poor and of “el pueblo”, the people.

Today, in the wake of his legacy, the people of Venezuela wake up at the crack of dawn to spend their whole day in food lines for the mere chance of being able to bring home groceries. Stray dogs, cats, and even pets are diminishing as they are killed and eaten for sustenance, even the animals in the zoo aren’t safe from the starving population.

Meanwhile, tankers full of Venezuelan oil sit in the Caribbean, unsold, because the government can’t even afford the maintenance and port fees to bring them into harbors to be sold.

Where did it all go wrong?

So how did this all happen? How did a dream of a utopia for the people turn into such a nightmare?

Well, the short answer, of course, is socialism. One of the reasons you will not hear the crisis in Venezuela spoken of often among leftist politicians and celebrities is that it is a perfect example of the failures bigger government, nationalized industries, and the redistribution of wealth. These kinds of policies are exactly what these leftist pundits want to see expanded here in the United States.

They also happen to be the exact same policies that led to this devastating crisis in Venezuela.

Let’s take a look at exactly how socialist policies is destroying Venezuela.

First Roots of Freedom in Venezuela

Venezuela is an incredibly fertile and resource-rich country that, at one time, was the most prosperous country in South America. Once a colony of Spain, Venezuela gained their independence in 1810 and, beginning in 1870, under the leadership of Antonio Guzman Blanco, they were able to attract foreign investors into their economy and modernize transportation and education.

In the first half of the 20th Century after the discovery of oil in Venezuela, it slowly grew to become the world’s single largest oil importer. While the government bounced back and forth from military dictatorships, coups, and several attempts at democratic rule, in 1958 the people of Venezuela were finally able to secure a democratic leader in Romulo Betancourt of the Democratic Action Party, who was the winner of a free election.

While the 70s saw massive economic growth amid a huge oil boom, the 80s brought instability and violence, as the people took to the streets in riots during a depression that resulted in hundreds killed and the implementation of martial law.

The Rise of the Chavistas

In the 90s, Hugo Chavez led two failed coup attempts and was imprisoned for two years as a result. 120 people were killed in the government’s effort to suppress these coups. However in 1998, a few years after the impeachment of President Perez, Chavez was elected president.

Chavez’ election spurred the ‘Bolivarian Revoultion’, after Simón Bolívar, the so-called “liberator” of Venezuela who was a political and military leader in the early 1800’s. With Chavez at the helm, this revolution saw dramatic changes in the constitution of Venezuela, as well as the establishment of new political parties.

This was when socialism began to take flight in Venezuela. Chavez implemented dramatic new socialist and populist-inspired economic policies, all in the name of helping the poor and leveling the wealth in oil-rich Venezuela. At the time, oil prices were high, so there was a lot of wealth to level.

In 2001, he passed 49 new laws aimed at nationalizing industry and redistributing wealth. At this time, critics began to express concern that he was trying to follow the Cuban model of consolidating all economic power to the government.

Over the next decade, the socialist dream of Chavez began to blossom. Surviving an attempted coup in 2004, he begins to break up Venezuela’s large land estates, which ranchers said was an attack on private property. Of course, attacking private property is exactly what socialists do.

He also moved to restrict the flow of information to the people of Venezuela by imposing harsh regulations regarding the slander of public figures in his government. And, as opposition parties boycotted elections, his followers began to dominate parliament.

In 2006 and 2007, the government continues to tighten its grip. Chavez signed a massive arms deal with Russia, marking a significant shift in Venezuela’s relationship with the United States, which Chavez had always harshly criticized. He also won his third consecutive presidential term in a massive margin.

At this point, he began to nationalize major media and telecommunication industries in Venezuela. His government also refused to renew the broadcasting licence of a major network that had been critical of his regime. This prompted massive riots in response as citizens wake up to the implications of Chavez’ intentions.

As Chavez attempted to nationalize more of the oil industry, major US oil companies Exxon Mobil and ConocoPhilips refused to turn over their operations to the government, and so Chavez expropriated them.

At the end of 2007, Chavez began to experience his first serious drop in support, as voters failed to pass a referendum that would expand government power over private property and the Central Bank of Venezuela. He still managed to nationalize one of the country’s private banks the following year.

In 2008 and 2009, although opposition began to gain some control in parliament and even the Caracas mayoral election, a referendum was also passed that abolished limits on presidential terms, giving Chavez a clear path towards dictatorship, in theory.

He also began to cultivate more of a relationship with Russia, by signing an oil and gas cooperation accord and participating in war exercises together.

In 2009, Chavez devalued the bolivar for the first time, by 17% against the US dollar for “priority” imports, and by 50% so-called non-essential items, in an attempt to boost revenue from oil exports. Devaluing the bolivar was a practice his successor Maduro would follow, eventually leading to the devastating poverty we witness in Venezuela today.

The Beginnings of a Crisis

In 2010, massive floods in the country provided Chavez with an unexpected opportunity to gain more power. The phrase “never let a good crisis go to waste” comes to mind. Many begin to fear this slippery slope will lead to full-on authoritarianism.

In the following years, price control continued as the government tried to protect against inflation. Any companies that did not comply were threatened with expropriation. Media companies face massive fines to avoid being taken over by the government.

In 2012, Chavez won his fourth term in office. However, in 2013, he passes away after a long battle with cancer. Nicolas Maduro, the current president, won the emergency election in a narrow margin. He had been Chavez’s’ chosen successor, so he vowed to continue Chavez’ mission.

As inflation rose, the National Assembly gave Maduro emergency powers for a year, which prompted mass protests across the country. He promptly used these new powers to limit profit margins.

The Foundation Begins to Crumble

In 2014, protests spread across the country in favor of the opposition party. The government accused the opposition of trying to attempt a coup, and used this reasoning to violently suppress the uprisings.

The Maduro government continued in 2014 to implement harsh cuts in public spending as oil prices began to drop dramatically. Through 2014 and 2015, as the opposition party began to be more vocal and gain more public support, the Maduro party pushed back by accusing various figures of assassination and coup attempts.

In 2015, the opposition party briefly wins 2/3 majority in the National Assembly, only to have several of its members resign under pressure from the Socialist-controlled Supreme Court.

In 2016, Maduro continued to fight inflation by continuing to devalue the bolivar and restricting public spending. However, his government also refused to allow nationalized oil companies to trade privately. This spurred mass outrage from the citizens of Venezuela, which is what caught the attention of the international media.

This year, 2017, tensions have come to a head. Constant clashing and power struggles between the Socialists and opposition parties in the government have been reflected in the populace by constant clashing in the streets, including several young men being shot and killed by the police.

The Venezuelan government’s attempts to violently respond to the protests as well as suppress the opposition parties has caught criticism from many other Latin American countries, concluding in Venezuela’s decision to leave the Organization of American States, or OAS over pressure to end the harsh government crack-down of opposition.

Thousands of protests have erupted in response to the newly proposed constitution, as many claim it will be very un-democratic. People have also been protesting the drastic food shortages and lack of necessities such as toilet paper, running water, and basic medical supplies.

Given the climate of conflict, protest, and devistating poverty of the last year in Venezuela, there is no telling what will happen in the face of the latest move from the new constitutional congress.

On August 8th, the new constitutional assembly declared themselves superior to all other branches of government. This is the most drastic move yet from the Maduro government to crackdown on opposition party politicians and voices.

The Ultimate Cautionary Tale of Socialism

What has happened in Venezuela should stand as a stark warning to the world that it’s impossible for socialism to succeed. Wealth redistribution seemed promising when oil prices were high, but companies were nationalized and prices dropped, the government ultimately had no choice but to expand their own power as the people began to starve.

The more the people–the very people Chavez claimed to identify with and want to help–spoke out against what the government was doing, the more Maduro tried to consolidate power to himself.

Most ironic of all, of course, is that Venezuela has turned into the kind of country that most Marxists think they’re fighting against. While socialists claim they want to eradicate poverty and empower the people, this socialistic system has damaged the economy so drastically that the people are hungry while tankers of oil sit rotting in the Caribbean.

And Chavez’s daughter is the wealthiest person in Venezuela.

So remember this the next time you hear a politician extolling the benefits of nationalized industry or harsh restrictions on private corporations. Venezuela, with an incredibly fertile land and with a free market economy, could easily be the wealthiest nation in Latin America. This would generate wealth for everyone, both at the top and the bottom.

Chavez’s socialism has done nothing but drain the wealth out of Venezuela and leave the people angry and starving. It is unlikely that any real change will happen in Venezuela without much more bloodshed, starvation, and death.

So how is that for a cautionary tale?

2 thoughts on “Socialism in Venezuela: The Ultimate Cautionary Tale”