So many guns, not enough money. Well – this is true unless you know someone and can borrow theirs. A couple weeks ago I had the chance to borrow a friends Kel-Tec Sub-2000 9mm Carbine. I have been interested in owning one of these for the past coupe years but it just never happened.

Over a weekend I was able to take a look at the Kel-Tec, handle it, shoot it, and get an overall impression. I was not able to do a full-bore review but certainly got a feel for it. 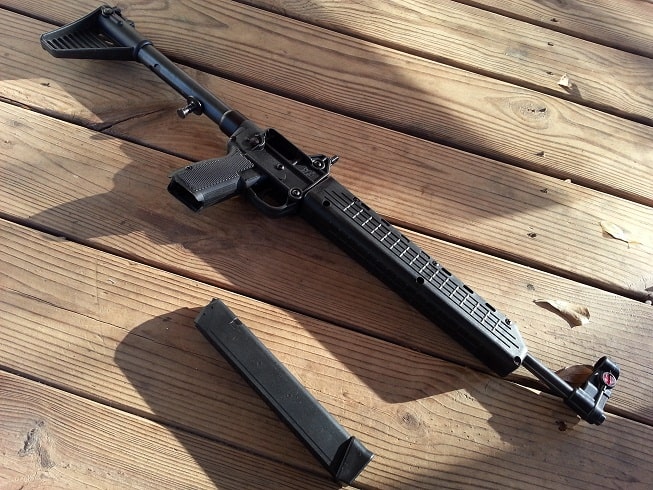 The Kel-Tec Sub-2000 is a 9mm carbine which accepts all Glock 17 magazines (17 or 33 round). There are other models and calibers of the Sub-2000 available. One of the things that interested me in the Sub-2000 was that one could have a “long” gun and a side arm of not only the same caliber, but taking the same magazine as well. There is certainly an advantage there.

Many make decisions on firearms based on appearance. I certainly want to like the looks of a gun, but I gotta tell you – this thing is Ugly with a capital U. Know what? Don’t care. Beyond the fact its not mine so my money wasn’t involved – the thing works. More on that later. 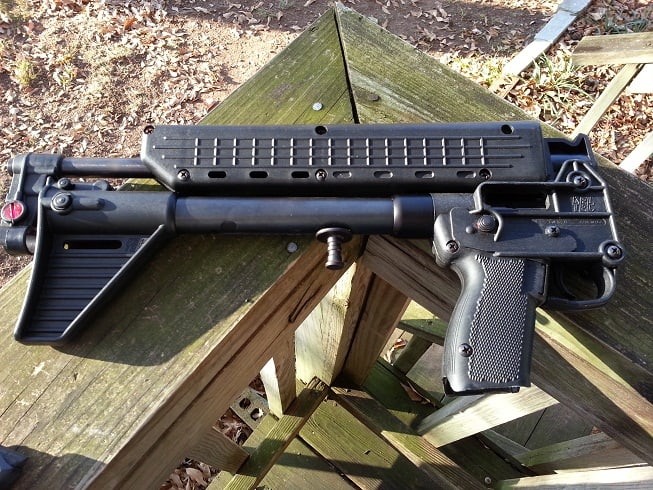 One of the most attractive and unique features of the Kel-Tec is its ability to fold in half to a very compact and storable. When folded the carbine can easily fit in a backpack – even a small one. In fact – a backpack could hold the carbine, a couple of 33-rd magazines and a few 17 round mags as well. You’d still have room left for some other supplies. 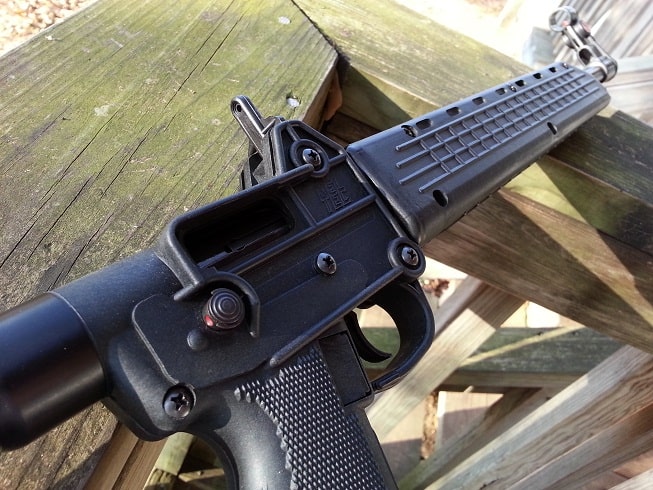 If you haven’t gotten the sense yet – I like this gun. It is lightweight and quick handling. Grip feels good. This is no Remington 700 and pulling it up to cheek certainly is not as comfortable. For what it is – I had no problem getting a sight picture. 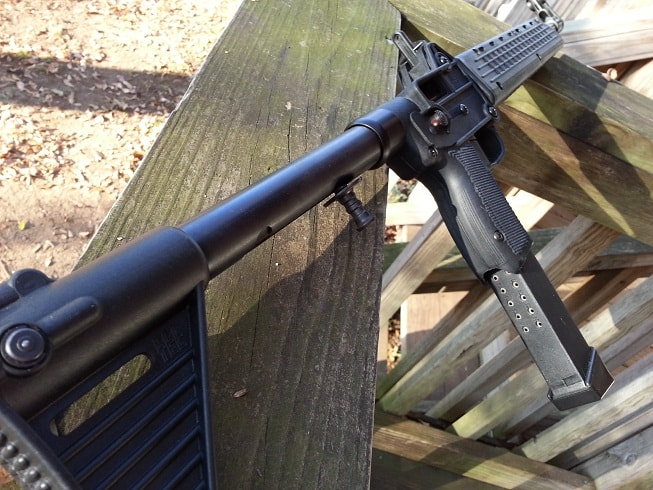 Speaking of site picture – take a look at those sights. Gotta say it – UGLY. They are functional but I do see them as a weakness. The rear sight sticks up and looks to be saying, “Please – hit me up against something so I will break!!” I am not saying the rear – or the front sight are delicate by any means – just say’n. 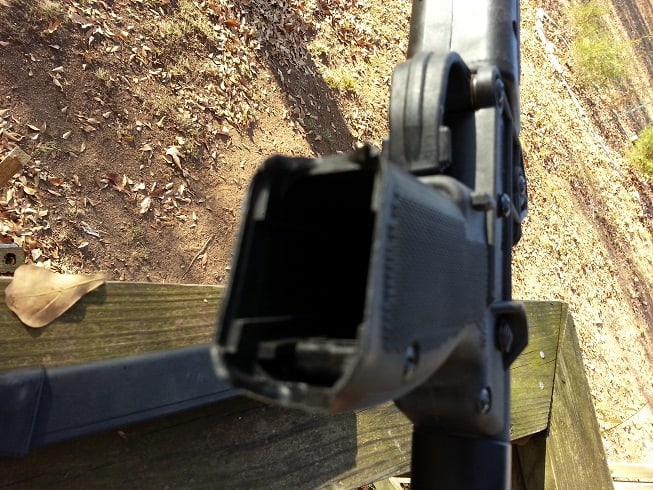 The mag well of course is in the grip. It is flared and  accepts magazines easily. No issues.

Rear sight is of the peep variety. It is not adjustable and there is only one size available. For the guns range – it works. The front sight is adjustable for both windage and elevation. The gun was right on when I received it so no adjustment were made. The front site  is orange in color and gives a nice contrast when looking through the black peep hole. 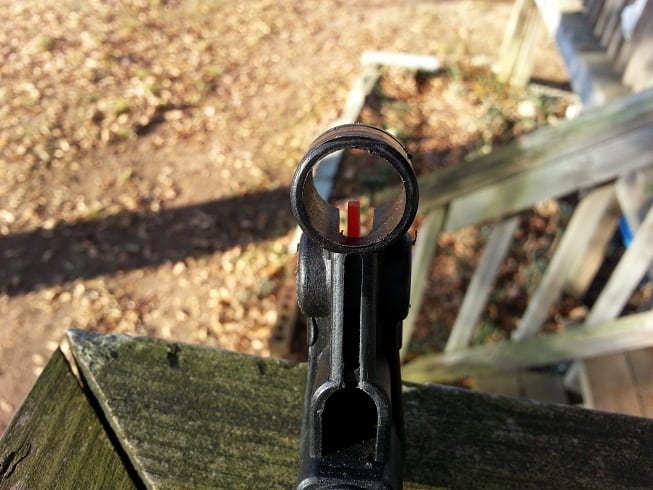 My shooting was done entirely within 50 yards. Hitting center of mass? Easy. My brother shot it better than I and nailed 20-oz bottles and soda cans at 25 yards with ease and repeatedly.

I would like to be able to ad optics to the gun – but there is no easy method to do that without modification and purchase of other parts.  Besides – adding and optic would negate being able to fold it. 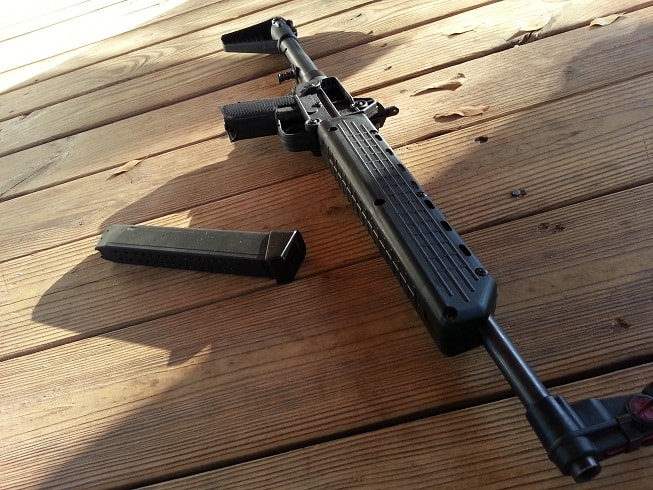 I found the gun reliable, handy, compact, portable, and able to send rounds downrange in a hurry. So – what didn’t I like about it?  There were a few things:

That is about it. I like the Kel-Tec Sub-2000. If I can find one at a decent price I would like to pick one up.