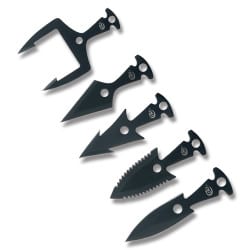 My wife and I are fans of the TV show “The Walking Dead” but not because it is a zombie show. We use the show as a teaching tool. As we watch the show, we discuss the situations that the characters encounter. My wife and I do a, what if we were in that situation. How would we handle that situation differently? Yes I know some of the situations that are in the “Walking Dead” are totally unrealistic. One of our BIG problems that my wife and I have with the “Walking Dead” TV series is, where do they get all of their ammunition? They seem to shoot and shoot yet always have all the ammo they need on their person and never run out.

This brought up two (2) interesting questions.

I conducted a little research and found out that at the beginning of the Vietnam war, our troops carried the M-14 rifle which fires the 7.62mm/.308 Win. round. The standard ammo load for the M-14 rifle that a typical soldier carried, at that time, was 100 rounds. It was quickly discovered that in a close combat situation, such as the Vietnam, soldiers were quickly running out of ammunition. Getting them more ammo in the jungles of Vietnam, during a fire fight, was extremely difficult. A lot of soldiers died because they ran out of ammo.

The military then issued the M-16 rifle in 5.56mm/.223 Rem. Because the 5.56mm round is much smaller, the amount of ammo carried by the individual soldier was increased. The standard ammo carrying load for a soldier carrying an M-16 rifle was increased to 210 rounds. That is one (1) 30 round magazine in the rifle and six (6) 30 round magazines on their person. Depending on the combat mission, a soldier may carry more ammo but 210 rounds was the standard ammo load.

Neither my wife nor I are trained knife fighters or trained in archery. I am a retired Law Enforcement Officer and have seen many subjects that were involved in knife fights. Every one of them had very nasty cuts and stab wounds. This is NOT what you want in a TEOTWAWKI situation. You may not have a convenient Emergency Room to get the medical attention that you need. So if or when we run out of ammo, we wanted a tactical advantage over another person that may be armed with just a knife or their bare hands. At first I thought a machete, with its longer blade, might be a solution. After thinking about it, I wanted a longer reach weapon to keeps someone at a greater distance from me. So I thought, stay with military equipment and use a bayonet on my M-4 rifle. This would give me a longer reach. However, a bayonet on an M-4 rifle still did not give me the reach or control over the blade that I wanted. It would be difficult to use an empty bayoneted rifle to hunt and fish with.

Then I thought, how about making a spear using the sheath knife that I carry. However, a knife is one of the most important items you can have in a SHTF situation. If you use your knife as the spear point for your spear and damage it that mistake could cost you your life. Using your knife spear, for hunting, fishing or defending yourself could leave your knife broken, chipped, dulled and useless. What if I need my knife for other chores while it was attached to a spear pole? I would have to take my spear apart then when I am finished with the cutting chore, I would have to reassemble my spear. Using my carry sheath knife as a spear tip quickly lost its appeal.

I conducted some research on spear points and found many different types. Many of them were too bulky, large and heavy to carry in my bug out bag. I wanted something lighter, something that would not add much weight to our bug out bags. We use back packs as our bug out bags in case we have to leave our vehicle during a bug out situation and start walking for some reason. 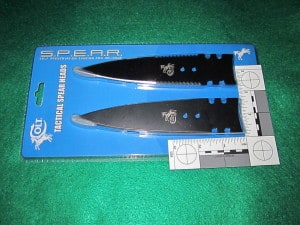 The “Colt®, 2pc, S.P.E.A.R. (Self-Preservation Evasion and Reliance) Series Spear Head Set” is described as, “Portable, reusable and fits easily into a rucksack, pack, or survival kit; they can be used for hunting, trapping, cutting and even skinning.”

There are two (2) spear heads per pack. One is a plain edge and the second has a partially serrated edge. The spear heads are seven (7) inches long overall. The sharpened blade is 6 7/8 inches, 1 ¼ inch wide and 1/16 inch thick. Both blades are black and are made of 440A steel. A set of instructions, on how to mount the spear points to a shaft come with the spear points.

These spear points fit nice and flat, are light weight, compact and take up very little space in our bug out bags. They come in the blister pack, with what appears to be, a hot glue point protector. I highly recommend you leave these point protectors on until after you mount them to a shaft. These spear heads come VERY sharp from the manufacturer.

The instructions state that you should use “a straight green branch” as a spear shaft. Using Paracord to attach the spear point to a wood shaft would work nicely. A section of paracord from a paracord bracelet would work well.

Hopefully you have read an article that I recently wrote titled “The Knaw”. The “Knaw” makes a perfect size notch, in the top of a spear pole, in which to mount the spear point to the shaft. It makes a great companion to these spear points.

Once you make your spear, you can use it as a defensive weapon or for quiet hunting, fishing, obtaining fruit and vines from trees. I am sure there are a lot of other uses for a spear that I have not mentioned.

They can also be sharpened just like a knife blade in case they get dull.

Well, you say that one of the solutions to the problem of running out of ammunition in a bug out situation is to carry more ammunition! While this is true, you need to determine how much weight you can carry over a long distance.

Here is the test that you absolutely need to do!

Think, you are bugging out in your car, your car breaks down, you run out of gas or any of another hundred reasons, you are reduced to abandoning your vehicle, taking ONLY what you can carry on your person and walking out.

Get your bug out bag, the firearms and magazines, ammunition, knife and everything else you plan to carry, ON your person, during a walking bug out situation.

Now weigh of all of those items and get the total weight.

Take a back pack and place the total weight of all of the items that you plan to carry, in a walking bug out situation, in that pack. You can use water bottles, rocks or anything you want as weight in the back pack you plan on using.

On a good weather day, put the back pack on with the total weight of your equipment in it and start walking. As you are walking, for every mile you walk, sprint 100 yards then without stopping continue walking. See if you can make a minimum of 5 miles. IF YOU CAN NOT DO THIS, YOU NEED TO LIGHTEN THE LOAD YOU PLAN TO CARRY!

So what items do you plan on eliminating out of your bug out bag?

Ammunition weighs a lot. However, you can never have too much ammunition. Even using a semi-auto M-4, that trigger finger does a lot of wiggling in a fire fight causing you to use up a lot of ammunition. Making a viable spear is just another option.

This is another option. I am NOT a bow and arrow person. If you are accurate with a bow and know how to make a bow and arrow shafts, you may want to check out the Colt® S.P.E.A.R. Series, Tactical Arrowheads, for $14.99, also at “Smokey Mountain Knife Works”. I did not buy these. The “Smokey Mountain Knife Works” part number for the arrow heads is CT3046. They are described as being “portable, reusable, and fit easily into your rucksack, pack or survival kit. They can be used for hunting, trapper, cutting, and even skinning. The arrowheads are the perfect tool for the survivalist and outdoorsman.” The set of five includes one of each: Sahara, Clovis, Frog Gig, Kirk, Medieval arrow heads. They range in size from 2 ½ to 3 inches long and are made of 8Cr13Mov stainless steel. (1-D)

I know, a bow and arrows give you range over the spear. However, if your primary bug out weapon is a firearm, when you run out of ammo, it will take you a long time to stop and make a bow and arrows shafts. This will take a lot longer than making a spear shaft.

Also, when you launch an arrow, sometimes the arrow gets lost, the arrow shafts break or the bow strings break. The spear is a very durable weapon.

Remember, prepping is about having as many options as you can have!

These arrow heads and spear points are light weight, slim and easy to add to your bug out bag.

NOTE:      I DO NOT receive ANY compensation, of ANY kind, from ANY company, for mentioning ANY product, named in ANY of my articles. I write about products that work for me.

“No society ever thrived because it had a large and growing class of parasites living off those who produce.”

6 thoughts on “Running out of ammo!”