Published with permission from The Retreat . Original post located HERE.

I have a few questions for our Elected Officials.  There are a few things that I don’t quite understand that they have talked about and a few questions about a few things they just don’t talk about at all.  The first question is what are the people doing that were on unemployment that have run out of benefits and still have not been able to find a job?  What are they doing for money to pay their bills and feed their kids?  Why are these people still not being counted as the unemployed?  What about the people that were fired or let go by their employer for some bogus reason so that the company did not have to pay unemployment insurance for this person?  What are they doing for food and shelter if they cant get unemployment benefits and why are they also not counted in the unemployment numbers? 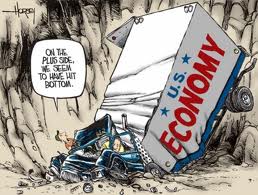 How is it our government claims that the economy is on a rebound but every single statistic shows just the opposite result?  How do they get a positive out of two negatives?  How can they come out and say they are doing everything they can to boost the economy and yet they can’t even come together on a simple thing like balancing the budget?  What the hell is a double dip recession?  Is it another name for a depression? Why can’t they just call a dog a dog?  Why is it OK to tax the hell out of the poor and give tax breaks to the rich?  In what world is that OK?  I have so many questions about so many things that just don’t make sense to me or many other people in America.  I would really like to know the answers to these questions and would like to meet the person that actually has the correct answers.  I would like to hear your take on these questions.

NOTE from Rourke: Great questions – I do not see them getting answered….. unfortunately.

8 thoughts on “Re-post from The Retreat: The American Economy – A Few Questions”