The recent blatant assassination of white Texas Sheriff’s deputy Gofourth is just one sign that a coming race war may have started. I am not referring to a 2nd civil war pitting one half the country against the other. I am referring to coming widespread violence being carried out based entirely on race being motivated by racists groups and organizations who exist solely to accelerate division. To what scale this race war will exist is anyones guess. The Texas sheriff shot 15 times in the back and head is just a piece of the puzzle. Unfortunately more pieces will begin to fall into place and eventually a picture will begin to be seen – and it won’t be good.

I have numerous black friends and people I come in contact with daily. I would hope they look at me the same as I look at them – people just like me. I could care less the color of their skin rather what is in their heart. Race relations have come so far yet I can see recent events setting forth a change in some peoples attitudes and viewpoints. Unfortunately within all races there are a select few that have grown up in cultures that teaches hate, division, and fear. These people are the problem as they listen to falsehoods that convince them of non-truths.

They follow people who preach hate and convince them that they must become part of a movement(similar to recruiting techniques within terrorist organizations). Within that population there are a limited few who will take matters into their own hand and commit violence for this movement. Violence against the innocent is the general outcome

Imagine your wife or husband, or son or daughter just standing there getting gas and someone walks up and shoots them 15 times. Terrible. I don’t even want to think about it. Innocent people getting killed because of their race – or even profession is simply unacceptable but it is happening. The reality is that it happens more than you know but not every police blotter and every act of violence is reported in the media. 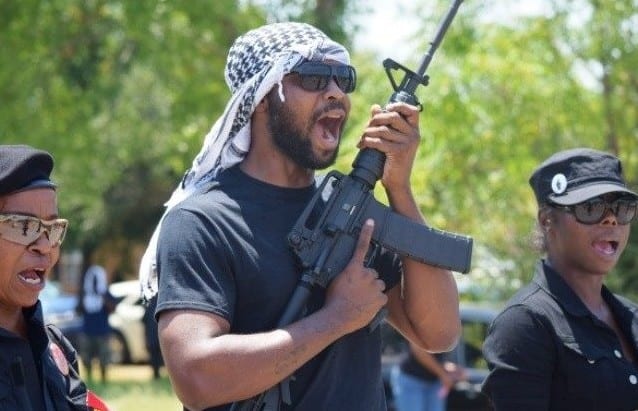 Two entities that are publicizing and accelerating this hate is the Black Panthers organization and the #BlackLivesMatter movement.  Here are a few recent quotes:

“You think we’re not pissed off a bunch about y’all killing our sisters? You think it’s okay? [We’re] the wrong n***ers to mess with. You’re gonna stop doing what you’re doing, or we will start creeping up on you in the darkness.” – – – Colonel in Charge of the Houston-based chapter of the  Black Panthers

“It’s open season on killing whites and police officers and probably killing cops period. It’s open season. Picking them off. Today we live in a time when the white man will be picked off.“ – – – #BlackLivesMatter radio show host on September 1st, 2015

“I am looking for 10,000 in the midst of the millions… 10,000 fearless men who say death is sweeter than continued life under tyranny. The Koran teaches persecution is worse than slaughter. Then it says, retaliation is prescribed in matters of the slain.” – – – Nation of Islam leader Louis Farrakhan, Miami Florida – August 2015

“I’m not gonna stand for this no.more. Tonight we purge !Kill all the white ppl in the town of Laplata #BlackLivesMatter” – – – online threat leading to the arrest of a black man

It is this type of hate speech that motivates followers to go out and rape, pillage, and kill innocent men, women, and children and create more division in this country. It is pathetic how the Liberal politicians and media classify violence.

If a white person kills a black person with a gun = racism.

If a black person kills a white person with a gun = it’s the guns fault and we must have more gun control.

Granted hate speech has been spewed for decades but today there is a difference. Simply social media spreads misinformation as well as provides an avenue for those who are very impressionable and controllable to be reached. Our leader in the White House has not helped the situation either by often taking the side of the blacks rather than the side of truth.

I know there have been movements and disgruntled citizens within varying causes since before this country’s birth but what we are seeing now may just lead to spreading violence across this nation.

Keep your head on a swivel.