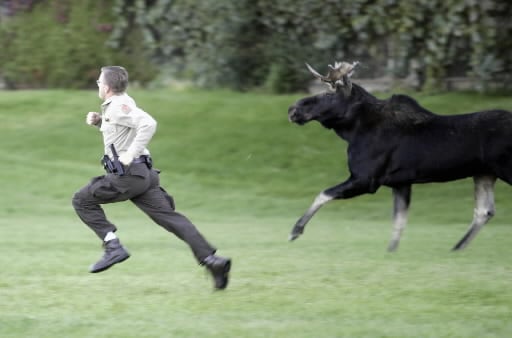 What pistol would you want to carry when hunting/hiking/backpacking in areas where dangerous animals roam?

My experience hunting/hiking in areas where big, dangerous animals prowled has been limited to the State of New Hampshire. New Hampshire has a few animals which could be considered dangerous including bear, moose, coyote and rumoured wolves. Of course wild dogs exist and other animals such a fisher cats could be dangerous however these are not common.

When hunting I had my rifle which was generally a .30-30 Winchester. I commonly carried a .357 Magnum revolver on my side while hunting as well as hiking during colder months(able to conceal it).

Many of you may live in places where the threat from dangerous animals is more present – and more dangerous than what I have experienced. What do you carry? What would you carry if traveling to areas where an unscheduled introduction to “Mr. Threatening Animal” may occur?

I am not planning an African Safari anytime soon however I have always dreamed of going to Alaska. I had an uncle that lived there for many years and I asked him once about firearms and protection. “.44 Magnum”…..was his response. He said that revolvers chambered in .44 Magnum were commonly carried due to the threats from bear.

I think if I ever get the chance to go to Alaska – or anywhere else that large brown bear/grizzly’s hunt – I would seriously consider a .44 Magnum revolver.

Another pistol I would consider would be a Glock 20 10mm. Certainly not as powerful as the .44 Magnum as ballistics are more inline with the .357 Magnum. The advantage of the Glock 20 is its capacity of 15 rounds and light weight of under 40 ounces. The unloaded Taurus Model 44 pictured above weighs in at 52 ounces.

I would talk to some people with more experience than I(Panhandle Rancher) prior to making a decision. I suspect he would choose the .44 Magnum revolver.

Any thoughts what pistol you would want when coming face to face with that dangerous four-legged animal?