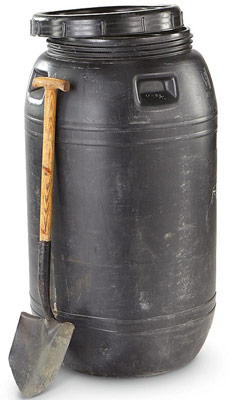 Awhile back I started to think about caching some of my gear. There is so much food, gear and supplies stashed here in one place due to our group prepositioning, that it concerned me that we could be ravaged by the door kickers or gangs before enough members arrived to present a suitable defense or evacuation. Time to spread it out and not lose it all in one fell swoop

My initial thought was burial caches. I went off to explore Lowe’s and Home Depot and bought about 40′ of 8” diameter PVC heavy gauge pipe, end caps and threaded collars, screw in caps and PVC glue. I cut them up to facilitate my longest rifles (some would still need to be partially dis-assembled to fit) and made up about six easily managed cache vaults. Before loading I tested the seals for water tightness by immersion. I did a few test loads. (rifle,pistol. knife mags, ammo, water straws or filters, some Mountain house packets…an expanded 72 bag load, that would each give me a minimum of supplies to continue to function) I have been doing this for decades so I luckily have multiples of dam near everything. I went out and pre-dug a few holes to accept my tubes but have yet to bury them, thinking that I was missing something.

Buried caches are a good idea, but you have to locate them carefully and be able to easily find them when needed while not advertising the site. It is a chore to carefully place and recover them. I gave some thought to underwater caching as I am in lake country, but that requires a lot of weights and the cache may be dislodged by a number of factors and lost. Embankment burial has a lot going for it and was a favorite of the Viet Cong.

I needed to tailor my caching to my particular worst case action philosophy. If the door kickers come and I have any notice whatever, I am not engaging them, I am leaving, temporarily. To return later or work from a different fall back site.

There are just too many preppers for the door kickers to camp on all of our doorsteps or make return raids. I am in a rural area with a myriad of trails into wilderness, so I put together a few bug out boxes.

My jeep is always loaded with my extensive 72 bag, corpsman med bag, a cased Uzi carbine, pistol, mags and ammo, as well as a tote of vehicle gear. If I have to run for it or get caught away from home, I am set.

If for some reason I have to run out the door with what I can carry and abandon the jeep as well, I have two caches stashed at nearby friends homes (unburied). The likelihood of us all being hit at the same time is remote. This should be a reciprocal arrangement, with them stashing gear at your location. Yes gear will be lost, but this way there will always be enough of it survive confiscation to mount a resistance.

I found the boxes for these caches at a military surplus store. They are large (2’x4’x1′) rubber sealed drop boxes used for military equipment and have multiple latches, handles, a lid at each end and even two wheels built into them, so a heavy load is easily packed and managed. These cost me about $100 each, reasonable for an excellent cache box to contain all you would need. An example: HK91, 12 mags, pistol and mags, NVD, med bag, Berkey filter, 500 rounds, two weeks of Mountain house, perimeter alarms, knife, poncho and liner, micro stove and fuel, team radio, roll up solar charger and the usual bug out gear.

My last thought on caching is my current search for an affordable quad-runner. I will attach one of these boxes to its racks and have it sitting “Hot pad” ready to go out the back forty and into a nearby 2600 acre preserve.

I am perhaps going a bit over board on the mobile caches, but I am on in years and just not up to humping 80 lbs of Alice pack into the boonies. The quad and jeep will give me the mobility and “Lift weight” I need to survive.

By the way, I plan to recover all of my lost gear in spades from any oppressors, at my time and my place after being forced to run. I will not engage in suicide. I will carefully pick my fights.

Give some very serious thought to dividing up your supplies into burial and buddy caches. Think of the worst that could happen, losing it all to FEMA thugs or looters, and prepare yourself for that possibility. There are military (SF) FM manuals on detailed caching that are available. Also some old vets may have some excellent limited distribution, in country, pamphlets on Vietcong caching and tactics, ask them.