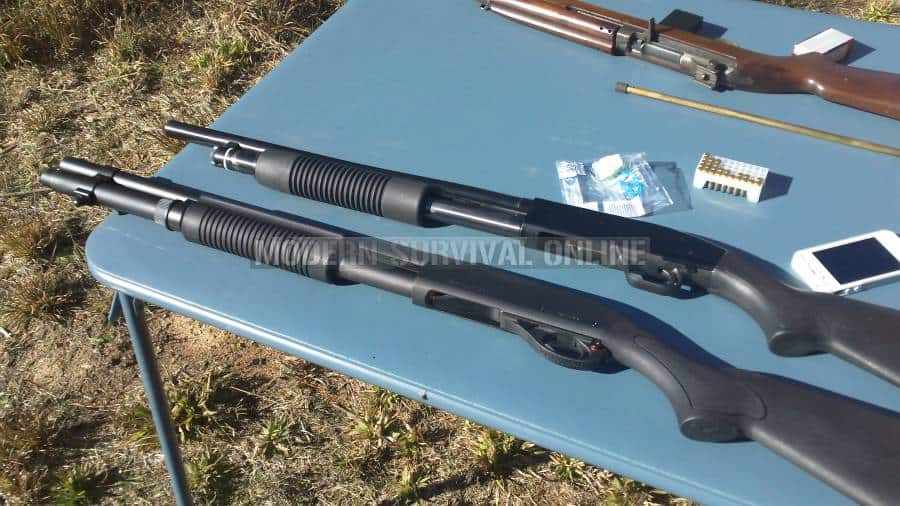 Americans are brand loyal, and Americans also love to fight about our preferred brands: ask any group of guys, “Ford or Chevy?” and watch the fur fly. People are passionate about their tools of choice, from hammers to boat motors, and this goes double for guns.

You will never hear such impassioned, intricate rhetoric and oratory as listening to two shooters debate the merits of their gun of choice while demonizing the failures of the other’s.

One of the longest running debates in the gun sphere is that of comparing the Remington 870 to the Mossberg 500 and 590 families. And as well it should! Between those two guns alone more than 22 million have been produced! That is a significant fraction of the total guns in the U.S.

So is one the True King of the Pump Guns? Is one as good as another? If you lack either, which may be best for a new purchase? The answer, as always, is “it depends.”

Instead of making this article a mere opinion piece, I will seek instead to equip the reader with a better education on the differences between them, the key features, design quirks and functional considerations that will help you make up your own mind.

Or, at the very least, give you the facts you need to win the next water cooler debate. Before getting into the main event, I will break down the major differences in the variants of both the 870 family and 500/590 family of shotguns so you can make a fair comparison.

Before we go too far into the main event, we should clear up a few items on the 500/590 family of shotguns. In short, they are essentially the same action, with only a few design changes between the 500 and 590 series, and a few upgrades between the 590 and 590A1.

These changes make no difference in the way you’ll operate the gun, but will determine the difficulty of upgrades and add-ons, especially magazine extensions and forends. I’ll detail these below for your enlightenment, and thereafter I will refer to the Mossberg guns collectively as 500/590, except where appropriate.

The main difference between the 500 and 590 series guns is in the way the barrel mounts to the gun. The 500 features a traditional barrel lug with a captured threaded screw that is mated into a corresponding hole in the end of the magazine tube.

The 590 series guns feature a circular barrel lug that slides over the magazine tube like a hoop, and then is clamped in place with a separate cap.

What this means to you is that on the 500, you are more or less stuck with the magazine capacity it comes with from the factory, unless you want to replace the entire magazine tube and barrel assembly to accommodate it a upgrade, a costly propostion.

The 590, on the other hand, can readily accept any number of thread-on magazine extensions if you want to increase capacity, with no change of barrel required.

The other change is a revision to the magazine follower that, in conjunction with the aforementioned difference in locking cap, makes room for one extra 2 3/4” 12ga. shotshell in the same length of magazine tube. Not a bad perk. Another item is the U.S. military standard bayonet lug, which the 500 lacks.

This is not the end of the world either way, but if you like the idea of simpler modification and a higher total capacity, get a 590.

The 590A1 is a “heavy-duty” revision of the 590, featuring a steel safety, steel trigger housing and heavier, thick-walled barrel. These enhancements add up to make an extremely durable gun that is resistant to brutal handling. It also keeps the bayonet lug from the standard 590. The 590A1 is noticeably heavier than the 590, but if one desires the most rugged variant available, it is the clear choice.

Note that some forends may rub on the thicker barrel of the 590A1 and require relieving of the material for smooth operation. Double check any prospective aftermarket upgrade before purchase.

When examining the Remington 870 variants, you will not be confronted with changes that are as obvious as the one son the Mossberg 500 and 590. Instead, think of the different “trims” as a quality gradient, with better materials, parts, and quality control (QC)and assurance (QA) going into the better grades.

The Express and Tactical grade guns are the lowest end, featuring cheaper machining and finishing of major components, and basic a basic finish applied to the gun itself, leading to a much rougher feeling action. Small parts, such as the extractors, are injection molded metal instead of machined stock.

The guns themselves are not assembled to the same standards as the Police or Wingmaster guns, and not subject to as stringent QC. Magazine and other essential springs are of lower grade. Trigger guards on Express and Tactical 870’s are plastic, but are metal on older Police and all Wingmaster variants.

If considering a gun for serious use or self defense, seek out a Police model or Wingmaster. Note that the Wingmasters as commonly fitted have a long barrel and short magazine tube, and both will need replacement to bring them up to snuff for defensive use.

Ok, it isn’t quite that dramatic. Below is an analysis of the differences in major design elements between the 870 and 500/590. We’ll have a recap and intangibles at the end.

All 870’s are steel, where all 500/590’s are aluminum. Both have well-earned reputations as rugged, hard running guns, and the lockup of both is steel to steel, so aluminum is not a disqualifier out of hand.

The aluminum will, though wear, faster than steel if we are talking about truly heavy use over the life of the gun, as the action bars (see below) of the 500/590 do mate with the softer surfaces of the aluminum receiver.

The tendency of the 500/590 action bars to wobble, in addition to its slightly oversized slide assembly makes for an action that feels looser, and less refined than the 870, and is sometimes described as “chattery”. This looseness does nothing to affect reliability however, and the 500/590 guns benefit from easier replacement in the event of a bent action bar.

A lightly used or tuned  action is a thing of beauty, and quick. Without significant tuning, the 500/590 guns just tend to feel a little sloppier over time. This is not a practical consideration, but will irk some users.

The 500/590 guns feature twin, machined extractors, whereas the 870 features a single extractor that is either MIM or machined depending on variant. For assured extraction of a stuck or stubborn shell, the Mossberg wins handily.

Also of note here is serviceability of other parts in the receiver: the 500/590 shell stops (the small arms that hold the subsequent shell for chambering in the magazine tube) and ejector are replaceable without special tools or procedure. The 870’s shell stops are staked in place and the ejector is riveted. Replacing either is no picnic for the average owner.

The magazine tubes themselves are likewise affixed: the Mossberg’s is threaded into the receiver, and very tightly. The Remington’s is soldered on. Again, replacement of one is achievable with minimal effort, the other is not.

The 870’s all have shell elevators (lifters) that protrude to the bottom of the loading port, and fold out of the way as a shell is inserted. The 500/590’s all have elevators that fold up flush with the bolt, meaning less clutter as a shell is inserted. This again, makes so little practical difference as to be nearly not worth the mention, but I mention it here for completeness. Some users think the Mossberg is easier to load because of it.

The 500/590s have a tang mounted safety mounted on top of the receiver; forward is fire, back is safe. It is an excellent design feature, and completely ambidextrous, but does not lend itself well at all to using a pistol grip stock, owing to the need to completely break down the firing grip to reach in that case.

The 870s have a safety located immediately behind the trigger on the trigger housing.  It is pressed from right to left for fire, and the reverse for safe.  Think “Flush on the right, ready to fight.” The 870’s design lends itself well to pistol grip stocks, but can be awkward for lefties. Neither gun is drop safe.

Remington has been having some well publicized QA/QC issues since acquisition by Cerberus Capital Management back around 2007, shortly after forming the Freedom Group with many other gun and ammo manufacturers.

There are many accounts, including several witnessed by the author when  he was still selling guns commercially, of lower end Remington offerings having substantial extraction and ejection problems, actions far rougher than the 870 was rightly famous for, broken small parts and improperly applied finishes that were vulnerable to rusting.

I would recommend seeking out an older 870 Police model, well-equipped from the factory for a defensive role, or an 870 Wingmaster to tune up if you wanted a quality Remington gun free from their current troubles. This will not be too difficult owing to the great number of legacy guns on the open market.

Mossberg has suffered from its share of lemons over the years, but the 500/590 series shotguns never faltered as badly as Remington has due to corporate shenanigans. Remington is also, as of this writing, currently in bankruptcy, and these ongoing issues are unlikely to resolve themselves in the near future.

This is not a knock against the 870 design, but any company can have good times or bad. Remington is currently, and has been for a decade, having a rough go of it.

Both guns benefit from extraordinary popularity, the Remington being considered truly ubiquitous, and both have excellent aftermarket support for nearly any part desired. Sights, lights, stocks, forends, safeties, rails, sling attachments, chokes and magazine extensions, everything you might need to modify either is readily available. The 870 does still have a slight edge, here.

As mentioned above, a pistol grip stock should be discounted entirely with a 500 or 590 due to the placement of the safety. If that is a must have item for you, the Remington is the de facto winner.  Lefties, though, will find the 500/590 a boon after a lifetime of being forced into a less than ergonomic world of right-hander’s guns.

If one is looking to tune an action and take it as far as it can go for performance, even with its quirks the Remington 870 will be the best basis for such a project, and there are several gunsmiths who will perform excellent work on them, the great Hans Vang, of VangComp fame is one such smith, as are the wizards at Wilson Combat. The 500/590 lend themselves a little better toward a more “working-class” gun, one that does not have as refined an action, but one that is more easily user serviced.

The Remington 870 and Mossberg 500 or 590 are both iconic American shotguns, and both are more than suitable for any task that may be required of them. Each has its own quirks and perks, but neither is so glowingly superior as to render the competitor the clear loser. Choose the one that works best for you, work to minimize it shortcomings, and get to training with it. They will both shoot as well as you can.

We will not spam you.
Print
9
Shares