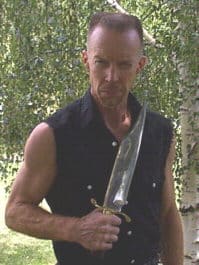 By Bret Gould
Unless one lives under a rock, we have seen the dawn of the police state.  An overbearing mailed fist that will use Homeland Security, private contractors and Russian troops to disarm us and subjugate us.  In this time we will have to use every means at our disposal to survive and thrive.  Thus will will have to harken back to skills from a bygone era.  We will have to acquit ourselves on the field by hand , knife and gun.  The question is how? The reason is, like it or not, we have a storm coming. We can’t hide in the sand as our rights are at issue. Our freedoms and our way of life.  There is no choice but to fight.
In modern times, we have see a continual separation in the arena of combat concerning hands, knives and guns.  We must first identify and quantify the methods to be used and just as important, the reason behind using those methods in the first place.
Most of the people involved in the gun industry, be it any type of training academy, will avoid  hand to hand combat training.   I find this highly ironic as research shows that most gun fights occur at conversational distances.  And as the force science institute reported, a man can cover 6 feet in  a third of a second and 9 feet in half of a second, the gun is not always the answer.  Yet the gunners,  as I affectionately call them, continue to train on square ranges, without practicing from the holster, using two handed responses in situations where one may have to go to hands first.  As we do not walk around with guns in our hands and  are not all seeing, sometimes we are the defender and have to go to hands first.  Also,  in the present society, unless one is an only one, ie a cop or govt thug, you cant pull the gun first or be seen as the bad guy.  Yet the gunners continue to seek haven in the gun only to be to slow to beat the knife man and strategically out moded to deal with the hand to hand man within 9 feet.  Until the gunners learn they are not Marshal Dillon in a tv western, they will die in the streets due to impractical, worthless training.

That leaves us with a choice in hand to hand combat.  First we must not use any sport style training as our only training method and certainly not MMA.  I will offend many with this statement but as two of the most highly trained caucasian grapplers in the world, E. A. Sykes and W.E. Fairbairn had experience in the matter. Both having survived the boxer rebellion where they fought scores of trained martial artists and having been two of the highest graded westerners ever to have trained at the Kodokan, home of judo in Japan, established their credentials to speak on hand to hand combat.  they also had the distinction of teaching the worlds first special forces, the vaunted British SAS, how to fight and fight they did.   These men stated to leave the sport grappling at home and learn to use better methods.  MMA is a sport, with rules, clean floors and a fight doctor to stop the fight. It does not take into account a concrete floor with broken glass, with guys wearing work boots, with friends who will sneak you or fights with weapons. Also this is a case of mutually agreed upon combat with situational awareness being the same. It is not a fair fight with rules and codes.  It is  not the typical street encounter with one side attacking the other from a position of advantage with no warning. MMA does not train for this. One should look to serious  fighting arts such as thai boxing, silat, kali and wing chun kung fu and Krav Maga.  Thai boxing is the only sport listed but if you have ever watched it, it has little to do with sport fighting.  You must train in a method that will take you into serious combat training, not ring or tournament fighting.
The next arena is the knife.  We must consider the everyday carry blade as well as the same blade context for battle or grid down.  Whatever your choice you must train with your blade and have it with you every day.  You must carry it so much you feel naked without it.  Your jurisdiction’s laws will determine the current, pre-grid down carry knife.  Spyderco makes excellent one hand opening folders in great steel that gets very sharp.  Sharp is a must as a dull knife is not that effective.  Another consideration is folder vs fixed.  Many carry David Mosier or other custom makers smaller fixed blades on the belt or waist band as they are faster and less likely to break than a fold.  They are also simpler to deploy.

Once we go grid down, larger blades come into play.  Our ancestors made a great choice in a blade known as the bowie knife.  Why the bowie?  It comes down to power, reach and speed just like a rifle.  A properly balance bowie, like the one made by Mike Sanders of Ponchatoula, Louisiana, is an 11″ blade, perfectly balanced, razor sharp and handles more like a fly swatter that a club.  It feels alive in the hand, holds a fantastic edge, hits fast but packs power in cutting like a hatchet. This is what we will need when the feces starts to be stirred.  The knife arts of silat or kali deal with some knife issues but James  Keating deals with the bowie the best.  It gives you that instant go to weapon that does not jam, nor need a reload and it is always there if you need it.  It was so effective that in the 1800’s some places banned the possession of one. That is a recommendation all by itself.

Our next foray is handguns. I always here how a smaller caliber is ok as the newest bullets make great expansion and we always know that placement is everything – right?.  So, let’s go to some extreme examples.  Now we know that placement is everything and a small caliber is ok so how do they make people on Kodiak Island Alaska use a minimum of a 338 Winchester magnum as the big Grizzlies don’t know about placement, but they know about bring enough gun, then place it.  Also the cape buffalo comes to mind, as it sometimes takes a lot of killing to get it to understand it is dead.  And, again, one must bring enough gun as placement alone with an inadequate caliber does not always get it done.  I realize this is an extreme example and the extrapolation is huge but it does illustrate the point. With the drugs on the market today, some criminals will be very hard to stop and you need all the power u can get. I like what Clint smith said,  “One must carry the biggest, gun one can conceal and handle.”  Get a Glock, Sig, HK, Dan Wesson, etc. but get a caliber starting with a 4 and learn to use it.  No hand gun is a death ray but .40 and above is a good start.
The next method to study is integrating the three tools: hands, knives, guns. Gabriel Suarez does an excellent job of putting it together. He does have controversial politics for some people, I’ll agree, but his methods are cutting edge effective.  He is one of the few who uses a real life driven, combat oriented approach.  Even just getting his dvd’s will improve your chances.  The goal is to create your own system, not mine, not Keating’s, and not Bruce Lee’s.  YOU need your own way of fighting that will give you success in the coming arena.  You need a system that will give you all of the tools , be it hand , knife or gun, that will allow you to change distance ans weapon smoothly and engage lethal threats.  And folks, get it done soon as the time grows short.

3 thoughts on “Integration of hand, knife and gun in grid down”