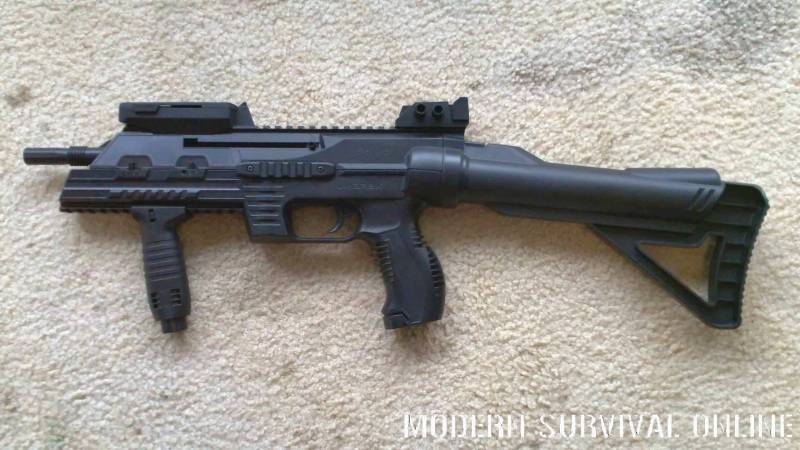 Just in case of a zombie squirrel attack – I have taken steps to prepare to protect my family. Introducing the UMAREX EBOS fully automatic BB machine gun.

The EBOS (which stands for Electronic Burst of Steel) is just plain fun! Running at a cost of a little over $100, this airgun provides a lot of fun and a decent amount of protection against zombie squirrels for the money.

Here are some specifications:

The built in reservoir holds between 300-400 rounds. In order to fire the gun – there is a spring loaded “magazine” that you charge with 24 shots by pulling back a spring loaded lever. BB’s fall into the space opened by the spring. Once the space is full – you release the spring and the BB’s fall under tension to provide for secure feeding.

The gun is turned on and off by a simple switch on one side. Additionally there is a switch which you move to select between single shot, 4 shot burst, and 8 shot burst. On the other side of the gun – another switch allows you to choose the cyclic rate. 3 positions allow a selection of  300, 400 or 500 rpm.

The UMAREX is powered by an 88-gram CO2 cartridge. The 88-gram cartridge is not the typical smaller CO2 cartridge which is normally thought of when it comes to air guns. This cartridge can power the EBOS for more than 300 shots.

This is a simple to use and really neat air gun to shoot. In firing over 400 shots so far – I have had no problems at all. I have had a few observations:

Overall – this gun is great fun to shoot. Spraying out BBs at over 500 fps into a target with the tactical looks and feel of this air gun is simply awesome.