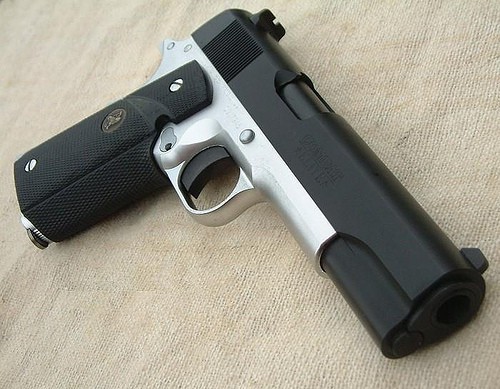 When considering a sidearm today there is an almost infinite number of possibilities. For a wise prepper and future survivor of TEOTWAWKI there is only three: The Colt 1911 chambered in .45 ACP, The Glock 23 chambered in .40 Smith and Wesson, and The Beretta M9/92 Series chambered in 9mm.

How have I come to the conclusion and why should you listen to what I have to say? I served in 101st Airborne Division and I am a veteran of Operation Iraqi Freedom. After my time in the military I continued working in austere environments as an independent contractor.

have extensive experience in the private security sector and I am a firearms collector and enthusiast. I own and carry each of these firearms. I have carried them both at home and in combat environments.

These pistols are ideal TEOTWAWKI sidearms for multiple reasons. The most important two is their proven reliability and availability.

Each has at some point been adopted as the standard issue service pistol for military and government use all around the world. They are battle tested mass produced weapons.

The 1911 was the sidearm of choice for the US Armed Forces until the mid-late 1980’s when it was replaced by the Beretta M9 and the M9 is still throwing rounds at the enemy in the mountains of Afghanistan today. The Glock can currently be found on the hips of nearly all US Law Enforcement Officers and Government Agents.

Currently, they can be all found on the shelves of every gun shop in America and in a TEOTWAWKI situation the mass production and issuance of these weapons means that the parts, magazines, accessories, and the weapons themselves will be more readily available than any other on the market today.

Another advantage to these weapons is their common calibers. These common calibers are easy to come by now and inexpensive when compared to some of the more exotic calibers available today.

If you choose to purchase one or all of these pistols you will need only one primary.

For my primary I chose the Glock 23. I carried a Glock both as my primary and as a backup weapon many times in my work overseas. I have fired thousands of rounds through them with little or no issues.

The 23 has good ammo capacity utilizing the 13, 15, or 17 round factory magazines and fires the .40 caliber round.

The 1911 comes in close second in my book. I love the feel, the reliability, and the caliber. The only reason I choose the 23 over the 1911 is the ammo capacity. No shooter in the world can reload faster than he can squeeze off another round. The Glock doubles my ability to shoot and halves my reloads.

The Beretta is my last choice out of the three. In my experience it is the least accurate and reliable. I am also not a fan of the caliber.

A friend of mine is a now retired law enforcement officer. In the early 90’s his department was replacing their 1911’s with the Beretta. He shot a perpetrator in the right hip with the 9mm. The guy barely missed a step and kept right on running.

After this incident his department went back to the 1911’s and then later to the Glocks. The 9mm is a decent round but if I have to pull that trigger I want to know that it is going to drop my target. For these reasons I have chosen to use the Glock as my primary pistol.

The way that I personally handle the issue is to keep a large quantity of ammunition on hand for my primary pistol, the Glock 23, and for the other calibers I keep only 1/3 the amount.

With this I have a means to arm myself, arm my family members, and reliable weapons that take three common calibers which I should have less trouble resupplying in a TEOTWAWKI scenario.

I will not give a count of how many rounds you should keep on hand. There are many opinions on this matter. Check your local laws and stay within your economic means.

Most importantly, don’t forget the magazines. 1,000 rounds won’t do you a bit of good in a fire fight if you only have one seven round magazine.

This may sound like common sense to many readers but on several occasions I have spoken with preppers who had a decent amount of ammunition purchased but only the 1 or 2 magazines that came with their firearm. How many magazines you should have is another area of debate.

I will tell you this. In a combat environment when I was using my pistol only as a back up and I had another primary weapon such as an M4 or M249 Machine Gun I carried 3-4 magazines. Later as an operator I often worked as an escort or courier carrying only my pistol. These times I would carry a minimum of five 15 or 17 round magazines.

Now while you are out picking out your new Glock, 1911, or Beretta with extra magazines make sure you pick up an armorer’s manual as well. A good gunsmith is hard to find today. You can bet that after TEOTWAWKI you will have to rely on your own ability to make repairs or upgrades.

One last piece of advice from an old operator, “Remember your pistol is meant for one thing. Getting to your long gun”.

15 thoughts on “The Pistol – A Survivor’s Best Friend”