Note from Rourke: This post was written prior to the recent buy-out of semi-automatic firearms, ammunition and magazines. Please take that into consideration when reading it.

There are many survival rifles to choose from.  I will break them down into 5 categories: AR, AK, Surplus, Pistol Carbines and Hunting. I will explain their advantages and disadvantages.  After reading my article you should be able to find out which one from the above categories fits you best. AR15 in action! (photo credit: Some rights reserved by simonov)

Lets start with AR.  Contrary to popular belief the AR does not stand for Assault Rifle.  It stands for Armalite rifle which was the company that first developed the rifle platform in the 1950s before it was sold to Colt which developed it into the M16 used in the military today. The AR15 is a highly popular  civilian version available in semi automatic only as opposed to the military version which is full automatic.  The AR 15 went on the market to civilians in the early 1960s and has been popular ever since.

The AK, also know as the Avtomat Kalashnikova was developed by Mikhail Kalsknikov for a design contest for a new rifle for use by Soviet Forces after WWII.  It was first introduced for use in 1947 by select Soviet Army Units, hence the AK47 designation.  A few years later in 1949 it was accepted for use by all Soviet Forces and its allies.  It is estimated that 100 million AK rifles have been produced worldwide making it the most popular Assault Rifle.  Even 6 decades after being first fielded it still remains in service.

Surplus rifles are also quite popular as “survival rifles” too.  Many good choices exist, but a common one is the Russian Mosin Nagant.  It was originally developed by Russian Sergei Ivanovich Mosin and Belgian Leon Nagant. It was adopted into a final design in 1891 and served Russia, Soviet Forces, and allies until adoption of the AK47.

Some Mosin Nagant rifles still are in service today in places like Afghanistan and SE Asia.  The design of the rifle feeds from a magazine that holds 5 rounds and is bolt action, allowing for one shot to be fired at a time.  Many variants exist and they can be acquired cheaply. Pistol Carbines have become very popular lately as “survival rifles.” Several manufacturers have put out carbine models including Keltec, Hi-Point, Beretta, and others.  I personally own a Keltec Sub2000 pistol carbine chambered in .40 S&W.

The Sub2000 like many other pistol carbines shoots the same ammo and most of the time uses the same magazine as its pistol counterparts.  This allows for interchangeability between rifle and sidearm easily.  Additionally, the Sub2000 folds in half for easy portability and storage.  The longer barrel insures longer range and accuracy than just using a pistol. 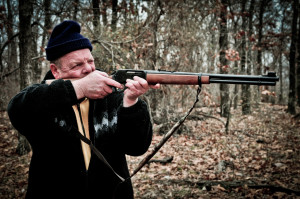 Hunting rifles naturally fall into “survival rifle” territory by the nature of their design.  Hunting rifles are available in wide variety of calibers, actions, and magazine capacities.  As an example, one I have used for a number of years mostly for deer hunting is a Winchester Lever Action .30-30.

Most hunters should be familiar with this rifle.  It is very accurate to at least a couple hundred yards and fires a powerful round.  Its internal magazine holds 5-6 rounds depending on if a round is chambered and you can hunt just about any medium to large game with this round.  Also it is a decent self defense round with its blunt nose and slow trajectory.  Of course this is only an example and we don’t have the time time or space to go into all of the hunting rifle choices available out there!

In conclusion there are many choices out there and of course you can only fire one gun at a time.  Think closely about what situation(s) you could be in should SHTF happen and choose wisely.  Also take into consideration stronger gun control restrictions may be on the way in the near future! I welcome your comments and suggestions.  Happy Prepping and be safe out there!