The sound of clumsy dead flesh beating at the walls echoes through the room.  Fear, dread, and a little excitement are racing through your veins.  You knew this day would come, you just hoped for a little more time and a lot more bullets.  This is just another night in the life of Bill.

Bill, unlike so many was prepared, as prepared as someone might be for cannibal corpses roaming the streets.  Knowing that electricity would eventually dry up after a catastrophe, he had purchased a generator that ran off of natural gas.  There is no telling how long it will last but at least he still has power; the rest of the town is black after sunset.

The creatures are nocturnal; he was able to track their movements and habits through the video system.  The first nights were the hardest.  Trapped and scared in his house, Bill had only his video CCTV system as a friend and comrade.  Twenty security cameras patrolled the compound while Bill was protected inside.  He followed the zombies with one of his controllable cameras after dawn and discovered where they spent the bright hot days.  They all went to a large farm house about half a mile away.  “How interesting” Bill thought, “these creatures though dead and rotting, still desire the companionship of others.”  He wondered where the owners of the farm house were.  If they were killed or “turned” it didn’t matter, he dreamt that maybe they were able to escape and were living somewhere the creatures did not exist.  Hopes and dreams are luxuries in this world.   When he went there the next day he used a gallon of gas and a match to ensure himself at least one restful night. 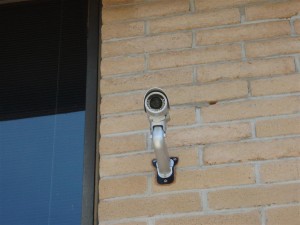 Tonight however, will not be restful and tomorrow may not come.  It’s been four weeks since an attack, Bill has created a solid perimeter around the complex and works hard not to make too much noise or show any light after dark.  The lack of action has put Bill even more on edge; he knows they know he is here.  They can smell him or sense him or maybe they talk to each other in that low death rattle moan.  He turns his head as a silent alarm is triggered.  His DVR powered on a flashing red light when motion was detected. “Camera 6!” he says to himself in disbelief.  He thought the north side was the most protected.  He watched the monitor intensely as he switched from camera to camera to attempt to see every angle of the attack.  There were six of them.  He could handle that he assured himself.

Pick up your own security camera today and protect yourself from flesh-starved demon corpses!