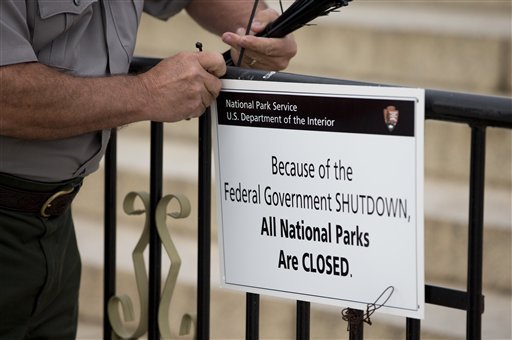 It is pretty telling how the Obama Administration is directing departments to make this shutdown effect as many people in the public as possible totally for political gain. Rather than strategically looking at a huge variety of “non-essential” services that could be eliminated to have as minimal effect on as few a citizens as possible – the opposite approach was taken for publicity sake. Pretty sad but not unexpected.

Let’s look at a few examples of what’s been going on:

And one of the most pathetic displays of Obama’s orders…..

The parkway’s chief ranger, Steve Stinnett, said Park Service managers in Washington directed him to block access to the inn at milepost 408.6 and ensure “people don’t utilize a business that, according to the federal government, is closed.”

Rangers will stay in place as long as they are needed, Stinnett said.

Let’s also consider the fact that all furloughed Federal employees will be paid regardless of how long the shutdown is. Many of these workers are sitting at home watching MSNBC and CNN – and getting paid. This makes no sense whatsoever. Now – there are also many Federal workers that showed up and went to work even though they did not have to – and didn’t know if they would be paid. These people deserve to receive their check when this is all done and over with.

It is really amazing the uproar the media and some public has had over this shutdown. They point out and complain about some of the smallest things and the way people are effected. Now – imagine if we were actually able to get someone in the White House to seriously cut spending and reduce the Federal Debt. Entitlements would have to get cut, non-essential departments and spending would have to go, and some people would be hurt by it. Oh well – we cannot have our cake and eat to. That has been going on for too long.

Obama sent his minions out in force to spread the pain and have the lamestream media blame the Republicans. Seems to be working – as usual.