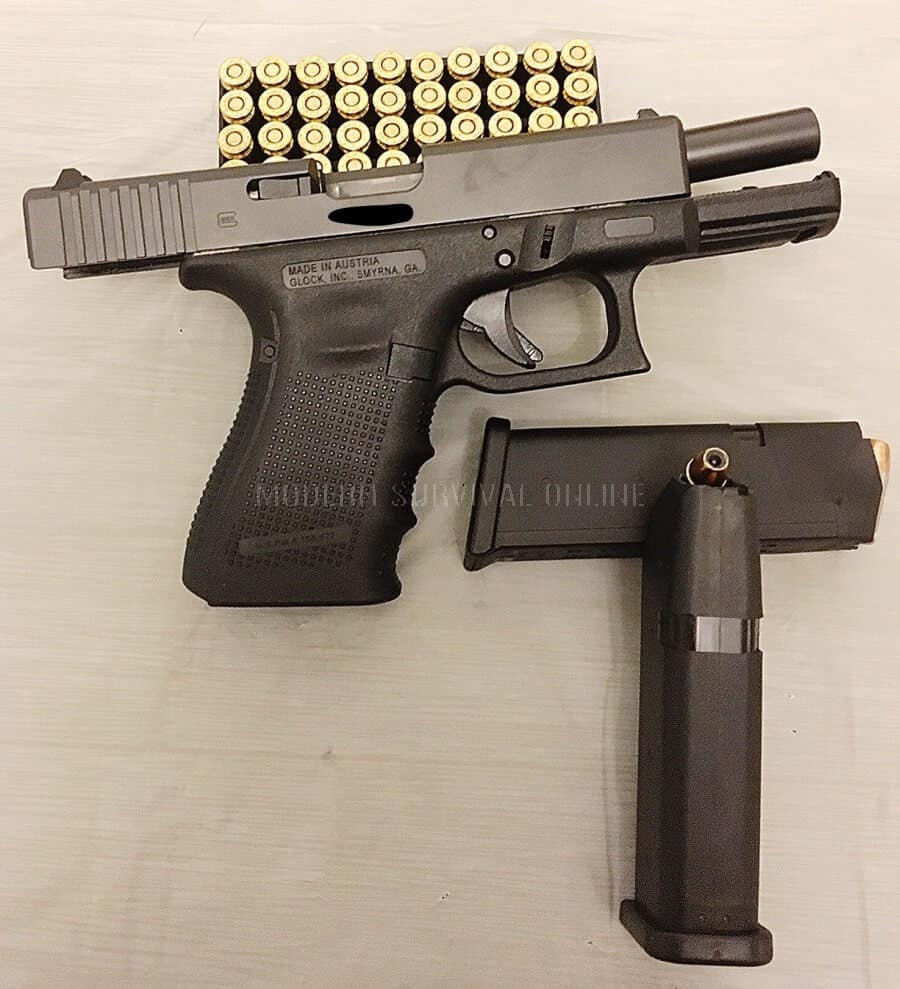 There is one pistol that is now so popular, so widely used, so plentiful that its very name has become a euphemism for “handgun”. That pistol is, naturally, the Glock. Love it or loathe it this polymer framed titan codified what shooters all around the world came to expect from a polymer framed pistol.

While not the first, and definitely not the last of the breed, the compact 9mm Glock 19, through a combination of stupidly dependable performance, ideal size and very clever marketing set trends that other manufacturers would scramble for years to meet and beat.

Easy to use, easy to shoot, incredibly durable and extremely reliable, with an impressive payload of 15 rounds in an easy to conceal package, the Glock 19 is in many ways the iconic compact 9mm; often imitated, rarely surpassed.

But Glock was not infallible. For too long they sat on their laurels and shunned innovation under the guise of “Perfection” while an aftermarket swarming with vendors provided every conceivable performance upgrade that civilian and professional users were clamoring for.

All the while competitors for Glock’s crown were hungry, and slavering to come up with a polymer gun that represented the new paradigm in striker-fired design.

In this article, we will take a historical look at the Generation 4 Glock 19, which is noteworthy since it was this group of product improvements that set the stage for the excellent Gen 5 and MOS Glock variants.

The Glock 19, like all Glocks, is a polymer framed striker-fired semi-automatic pistol. The compact 19 is slightly shorter in both height and length than its progenitor, the fullsize Glock 17, and carried two less rounds in its magazine for a total of 15, or 16 with a loaded chamber and full magazine.

The 19 is significantly larger than its smaller cousin, the subcompact Glock 26. The trigger is the same somewhat mushy but consistent stock Glock trigger that we all know, and all 3 passive safety systems are retained in the 19.

The Glock 19 otherwise is identical in operation to the larger 17, with all parts, controls and locking system being identical save for the shorter slide, barrel and recoil spring assembly. While not truly an “in-between” size compared to the 17 and 26, the 19 is noticeably easier to carry and conceal compared to the fractionally larger 17.

Popular with police forces, militaries, civilians and sportsmen, the Glock 19 is a ubiquitous and excellent polymer 9mm.

Genesis of the Generation 4

After more than a decade of commercial and law enforcement market domination, real threats to Glock’s market majority began to surface in the form of the Smith & Wesson M&P series pistols and around the middle of the 2000s.

The M&P featured ambidextrous controls, adjustable grip sizes, steel sights and forward slide serrations out of the box. More than a few professional users thought the stock trigger of the M&P series was superior. Clearly, this was not an also-ran gun that Glock could simply ignore before they went back to swimming in their Olympic swimming pool full of gold bars.

In 2010, facing mounting pressure from the M&P, outcry from law enforcement who wanted more adaptability for issued guns, and a frothing desire to keep on making absolute fortunes, Glock finally decided to roll out the first truly significant upgrades to the longtime standard 3rd Generation guns produced since 1998 (not counting the ill-fated RTF2 guns that came out in ’09).

The Gen. 4 guns would not be the mind-bending, watermark obliterating guns that the Glock 17 originally was way back when it was introduced. Instead, the Gen.4 guns would be refinements, broadly speaking: new, more aggressive grip textures; reversible magazine release; interchangeable backstraps; a captive dual recoil spring assembly; and some internal geometry changes to slide, trigger and barrel.

All in all, the changes were welcome, but underwhelming in light of many competitors’ offerings.

Differences between the Gen. 4 and Gen. 3 Glocks

As said, the Gen. 4 Glocks were models of refinement, not barrier-busting innovation. These very same changes would have stolen much of other makers’ thunder had Glock introduced them a few years prior.

The first and most noticeable change is the grip, both texture and size. The overall size of the grip was reduced, molded now with small, pyramidal checkering to afford more traction on the frame.

This reduced size was accompanied by two installable backstraps, held in place by the trigger housing pin. The medium closely mimicked the size of the Gen. 3 legacy frame, and the large increased the length of pull by nearly two tenths of an inch.

Lefties too had something to celebrate: the magazine release on the Gen. 4 Model 19 and others was oversized for sure actuation and now user reversible with only rudimentary tools.

Herein lays one of the rubs: while Gen. 4 mags are reverse compatible with older Glocks, and older mags will work in the Gen. 4’s, if the magazine release has been reversed for left-handed use then only Gen. 4 magazines may be used. Sigh…

The updated recoil spring assembly was of the most interest to serious students of the gun, as this type was seen for years in the subcompact Glock pistol lines.

Changing the compact and fullsize pistols to this arrangement carried the promise from Glock that shooters would enjoy less felt recoil and the RSA would have a longer service life under the same firing schedule compared to the legacy single captive spring design.

Now for the other quirks: to accommodate the redesign of the frame and insertion of the new recoil spring assembly, other internal components were slightly modified, specifically the slide, barrel shelf and trigger components.

This means that some legacy OEM components from the Gen. 3 guns either will not fit the Gen. 4 guns or will need to be modified to fit. It further means that the trillions of aftermarket Gen. 3 mods will all need to be fitted on a trial and experimental basis. There is a strong case for the institution build by the long reign of the Gen. 3 Glocks.

The Generation 4 Glocks were a significant improvement on paper over the Generation 3 legacy guns, but one must be aware of the costs as discussed above. They will not be an issue for everyone, and by now many aftermarket manufacturers have no doubt catered to the unique differences of the Gen. 4 guns.

Is There Any Reason to Choose a Gen. 4 Glock over another Generation?

That depends. If you are a “stock shooter” the Gen. 4 Glock is a straight across upgrade of the Gen. 3’s, but itself is now, on paper, inferior to the Gen. 5s.

Should one come across a smoking deal on one, I would not hesitate to purchase it. This appraisal changes somewhat if you are, like so many Glock owners, a shooter who sees the stock gun as a starting point, a canvas for improvement and nothing more.

The Gen. 3 Glock is still today the undisputed champ when it comes to sheer amount of potential upgrades and aftermarket parts available for it. If you are of the mind to super-tune or completely modify your Glock down to the last pin and spring, you may be best served sticking with your legacy pistols instead of going to the brand new Gen. 5 or the Gen. 4.

Ultimately, much is interchangeable between the Gen. 3, 4 and 5 pistols, but some parts are not. Glock has been cautious to warn users against assembling “mutt” pistols with OEM components taken from multiple generations even if they fit and pass function checks. In such cases, the pistol may function, but tolerance stacking is a real condition and reliability may be adversely affected.

Before embarking on such an experiment, especially for a defensive gun, consult a gunsmith or customizer who is extremely fluent with all generations of the Glock pistol and even then proceed cautiously.

The Glock 19 Gen.4 was not an earth-shattering upgrade when released, and advancements in pistol design since, including Glock’s own Gen. 5 guns, has borne that out. The Gen. 4 did, though, make a bunch of smart and long overdue upgrades that paved the way for the excellent Gen. 5, and those upgrades were long overdue if one cared to watch the march of Glock’s competitors and the most commonly selected mods installed by owners.

Today, the Gen. 4 19 is still a good gun, in all the ways that Glocks are good guns, but as a legacy design its significance is little more than a waypoint that brought us to where we are now. That isn’t a bad thing, there is just not much reason to seek one out over a Gen. 5, or one of the zillions of Gen. 3 pistols on the market.