Hope everyone had a safe and happy weekend. The East Coast was hit with a massive amount of rain. Charleston, SC had areas waist deep in water. Luckily my area was spared for the most part.

The situation in Oregon was tragic. To make it even worse are politicians taking advantage of it to push an agenda. It is shameful but not surprising. The bodies of the victims were still warm when Liberal politicians started on the gun control bandwagon trying to show how compassionate and right they are. If you heard many of them speak including President Obama they spoke of gun bans. No – they did not use the word “ban: but lets look at what they did say.

Read the following stated by President Obama this past Friday:

“For example, you’ll hear people talk about the problem is not guns, it’s mental illness,” Obama said. “Well, if you talk to people who study this problem, it is true that the majority of these mass shooters are angry young men, but there are hundreds of millions of angry young men around the world — tens of millions of angry young men. Most of them don’t shoot. It doesn’t help us just to identify — and the majority of people who have mental illnesses are not shooters.  So we can’t sort through and identify ahead of time who might take actions like this.  The only thing we can do is make sure that they can’t have an entire arsenal when something snaps in them.”

Did you catch that? “make sure that they can’t have an entire arsenal” That my friend is a gun ban. Will it happen? No it won’t. He does not have the power to carry this out. If he did it would have occurred already.

Regardless this is something to take seriously when the next election comes around. If your candidate doesn’t get nominated so you hold your vote consider the ramifications to all of us gun owners. Obama actually suggested in this same speech he wants Americans to become a one-issue voter. The issue? Vote only for those in favor of gun control.

Got my new Goodyear Wrangler Duratrac tires installed on my Jeep. Feels so much better than my worn out previous ones. 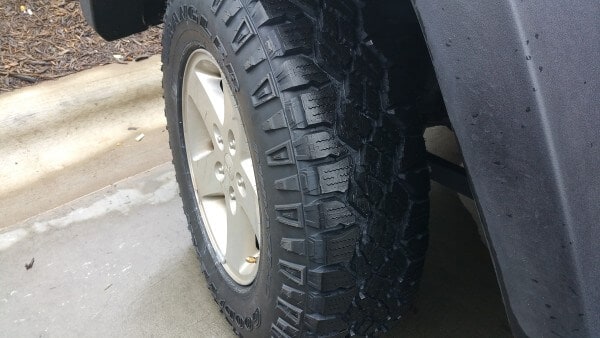