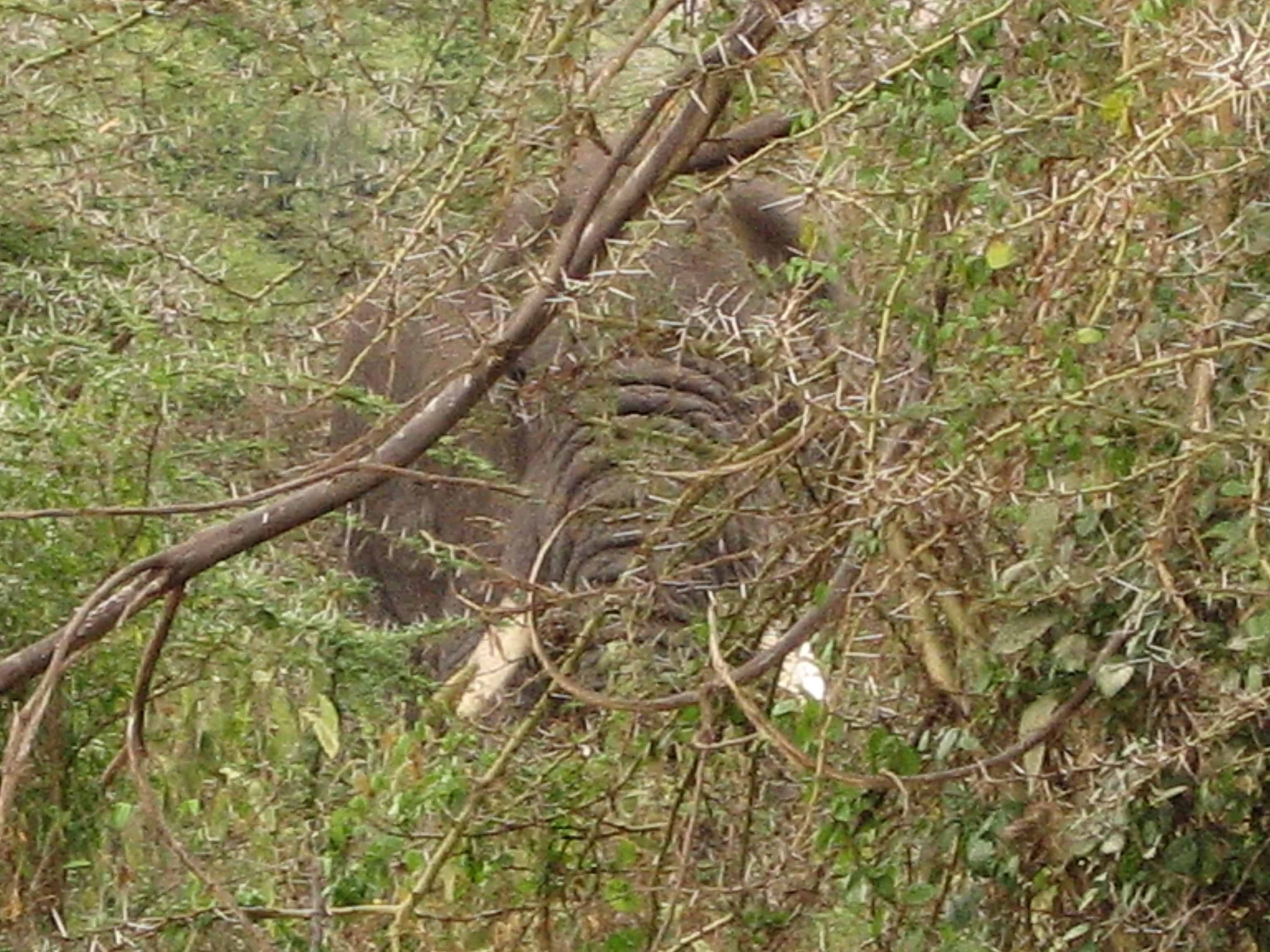 It is considered axiomatic that certain of those man creatures known in the vernacular as Nasty Boogers are uniformly distributed worldwide. I have had the high honor and good fortune to have hunted this most challenging and dangerous variety of the genus homo. During the Cold War era, pursuit of same took me throughout Eastern Europe, around the Pacific Rim, down to the Dark Continent, and over to South America. Even though this most wile of creature came with neither season nor bag limit try as one might, and I did so mightily, the reproductive fecundity of this varietal sub-species is such they can never be hunted to extinction. Now a feeble old man, my hunts have become more sanguine, generally focusing on the panthera genus of the felidae family and to a lesser extent, dangerous herbivores of the African East Coast. A result of all this hunting experience is that I have some knowledge of the rigors and hazards associated with travel in exotic locales.

Not always but usually and really not too surprisingly, many of the foreign peoples encountered while engaged in pursuit of the common Nasty Booger, actively hated the United States and its citizens. This enmity may be classified into four large categories: ideology, religion, garden-variety envy, and that caused by the stupid mistakes of our citizens while abroad. In the latter category, I include becoming involved with local women (a real biggie) and failure to respect regional culture and social manners. These include violating the local interpersonal distances, displaying the sole of one’s foot, and eating or touching someone with the wiping hand (big no nos). Even pointing with one’s hand can offend because some refined cultures point with the chin. Proclaiming loudly and with certainty that Europeans drive on the wrong side of the road is not only bad manners, it’s stupid. Those people drive on the other side of the road, just like we do from their point of view. Many of us could benefit from reading KISS, BOW, OR SHAKE HANDS: HOW TO DO BUSINESS IN SIXTY COUNTRIES, by Conaway and Borden and every male learning how to become a man should read THE ULTIMATE MAN’S SURVIVAL GUIDE: REDISCOVERING THE LOST ART OF MANHOOD, by Frank Miniter.

Americans (and I mean United States citizens who have no more American nationality than Patagonian) are often described as being rude, crude, and uncouth. This sort of citizen promotes a kind of ambassadorship that just keeps on giving. By proudly and patriotically announcing to the world that WE ARE AMERICANS, Canadians, Mexicans, and the citizens of the remaining nations of Central America and on the South American continent are put down and demeaned into non-existence. Liberal application of the Golden Rule is always one of the best forms of ambassadorship. I have come to dislike many things French but will always remember the kindness shown by a taxi driver outside of Gare du Nord. While struggling valiantly to remain afloat in a sea of Halliburtons Zero, my wallet and passport fell to the ground unnoticed. In defiance of tired travelers crying ‘taxi, taxi,’ this kind Frenchman abandoned his vehicle, pursued me into the station and returned both.

We in the United States usually enjoy easy access to advanced medical care and safe water.

Not so for those in far too much of rest of the world. Never leave home without being current on all logical immunizations and prophylactic treatments. Diphtheria and cholera are no laughing matter, neither are yellow fever, malaria, filariasis, trypanosomiasis, and hepatitis. So many travelers have had problems with the antimalarial, mefloquine (Larium), it should have been called Delirium. There are a host of efficacious antimalarials, yet US physicians keep on prescribing mefloquine. The jungle is no place to enjoy drug induced delirium so please leave Larium on the pharmacy shelf and demand something else. I travel with the best Katadyn water filter and use it. One friend had to be airlifted out of Calcutta with a bad case of diarrhea. He almost died of dehydration, and with two IVs running full drip. Montezuma’s revenge is real. Practice food and water safety. Have your teeth cleaned before travel and ask the dentist what in your mouth will likely need corrective attention in the next twelve months. Take care of any such problems before getting on the airplane and please don’t rinse your toothbrush in the local water. Travelers and preppers alike might consider UV germicidal toothbrush containers.

Stay alert and practice safety at your travel destination. By doing something foolish, I suffered a fracture somewhere in the jungle between Bogotá and Cali. Not good, not good at all, especially when surrounded by Nasty Boogers. If you need eye glasses, travel with several pairs. Two is one and one is none. Back when still equipped with defective original issue organic optical lenses, I copied my prescription onto all passports. Opticians worldwide can fill your US optical prescription. There are several purveyors of adventure medical and surgical kits for those traveling in the third world where reuse of disposable syringe and suture needles are common, even in hospitals. Such kits along with a pack of blood clotting preparation take up ever so little room. Some travelers take prepackaged IV kits replete with Ringer’s.

I never travel abroad and certainly not to third world destinations without a personal EPIB, two GPS units, a Brunton conventional pocket transit (also good for determining elevations and signaling airplanes), and at least one of the small compasses made to slip on a watch band. I try to keep these handy things on binocular and camera straps as well. Destination dependent, I may have a Motorola Iridium or Nera INMARSAT satellite telephone and always paper maps, maps, and more maps. Oh, regarding maps, some kind of north up is a common convention but not universal. If your map doesn’t have a north pointing arrow, compass rose, or other such orientation device, be sure you’re right before plodding ahead. Way back in the ancient pre-GPS days, a local east up map caused me serious navigational problems in the Land of the Rising Sun. And then there are regions that use other than the Roman alphabet. Try using Chinese, Japanese, or Middle Eastern language road signs for orientation. Every traveler should understand grid north, polar north, magnetic north and their relation to one another. Communications ability is a force multiplier and small handitalkies can be a godsend.

Clothing made in the United States, especially if printed with certain themes (flags, eagles, well known monuments, product advertisements, etc.) broadcast national origin. Male and female shirts/blouses and coats made in or for US markets usually have buttons on opposing sides. Not so in some other places. Which side your buttons line up on may provide cogent clues. To blend in, wear the local clothing.

Nothing is as durable as quality. Where I often traveled, replacements were impossible and I had to depend on but what I left home with. Knives are ubiquitous and pack easily in checked baggage for most destinations. Like President Reagan, I prefer Randall Made and carry their Special Number 1 fighter. Trivial items common in the US may have great value elsewhere. When hunting in Africa, I always pack a number of Leatherman tools. When someone does me a good turn, I take the Leatherman off my belt and give it to them as a ‘personal’ gift. That evening, I remove another from my kit of spares, put it on my belt and I’m ready for the next day. Some African families net less than $300US per annum. For them, a $40 Leatherman is a huge gift, and useful too.

I’m particular about binoculars and when hunting wear them bandolier style high under my non-shooting arm with strap just loose enough so that they can be raised to my eyes. I prefer Leica Geovid 8×56 range measuring binoculars but use Geovid 10x42s on the plains. Leica image quality is stunning! Regarding what the Brits call a torch, the Surefire Kroma is wonderful and ever so patriotic with its red, blue, and white LEDs (blue is helpful in following a blood trail in low light). A hands freeing headlamp is wonderful at night in your tent and whenever light discipline is not required. I use the Surefire Saint Minimus headlamp. There is a place for chemical lights but I never use them without an adjustable shroud.

When laying over in a third world city and without firearms, I try to buy an aerosol can of wasp and hornet killer. These type insecticides usually project a stream of poison for some distance. Now imagine spraying an assailant in the eyes with wasp killer. Serious business but silent, potent, cheap, and easily available – an ideal defensive weapon.

I stayed in a Panama City, Panama hotel for a time. Any place there where a US citizen would likely feel safe employed armed guards (now that’s scary just on its own) along with iron bars and gates ad nauseum. Nevertheless, every so often armed gangs would take over the ground floor of a hotel and work their way up room-by-room robbing the guests, and worse. Iron bars provide an apparent kind of security but in reality is but another form of a cage. Elevators by Otis work quite well in this country and are exceedingly safe. Not so for elevators in certain other countries. I always make it a practice to tap the lift floor with my foot before committing to enter. People actually get killed stepping through an open elevator door – especially when the car is elsewhere. The risk increases at night. Leatherman tools are useful for removing vent grates. High vent ducts are often better places to hide valuables than hotel lockboxes.

Emergency medical repatriation is quite expensive and may exceed the median cost of a house in the United States. MedJet Assist and Global Rescue offer insurance packages that are cheap, considering the alternative. The latter also offers a variety of extraction packages as well. Verify that your health insurance is valid while out of the country.

Your diet will be different in third world countries. Beef jerky and fruit trail mix are two good comfort foods. I also take along fish oil. It is available in lozenge type capsules that hide the taste. Fish oil is essential for keeping regular when on high fiber, high protein diets typical when living out of the muzzle of a rifle.

Travel to other countries, especially exotic locations overseas is an education broadening experience. Maslow’s hierarchy applies everywhere but seeing firsthand how other cultures organize is worthwhile. Most US citizens return from third world countries with new appreciation for the labors and travails of our forefathers.

Stay safe and have a good time,

INFOGRAPHIC: Bug Out Bag the Essentials
The Importance of a Fire Kit and Knowing How to Use it.
6 Tornado Survival Skills to Practice Today