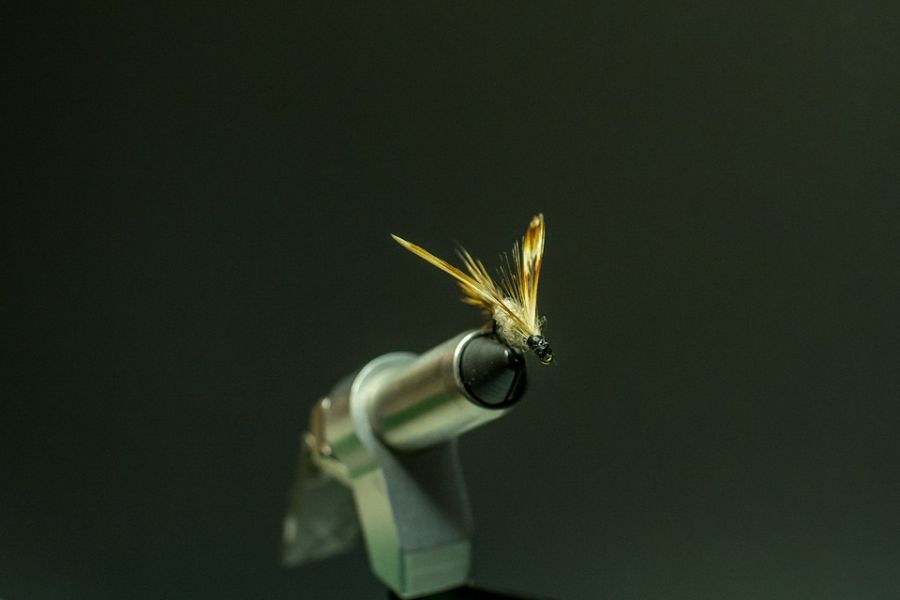 I went through a rough period financially after getting out of graduate school. I could not find work in my chosen field, criminal psychology. I worked per diem (as needed/as available) at a halfway house for the severely mentally ill, and during the spring and fall, teaching a class or two at a community college.

Money was tight at times, especially during the summer, when there were no classes for me to teach. One Thursday, I had the very unpleasant awareness that the fridge was more or less empty, all I had was a handful of change, and there was no paycheck until the next day.

None of these options were attractive to me, so I came up with another idea.

A mess of panfish, slapped on a charcoal grill, accompanied by a can of beans dressed up with brown sugar, mustard and tabasco sauce, accompanied by an impromptu cake/bread (?) made of Bisquick, water, instant coffee, coffee creamer, cinnamon, and powdered sugar made for a meal.

Flies are functional works of art. A fly is a handcrafted lure designed to imitate a food organism for a fish; typically an insect or baitfish.

Flies can be constructed from a variety of furs and hair, feathers, yarn, and synthetic material such as chenille, yarn and tinsel. The materials are fastened to a hook with a fine thread and locked in place with a type of lacquer commonly referred to as head cement. You should be able to catch at least five or six fish on a fly before it gets chewed up to the point where it needs repair or replacement.

Flies can be purchased in sporting goods stores, or ordered online. You can also learn to make them yourself. You can take classes on fly-tying, though I taught myself with Eric Leiser’s Complete Book of Fly-Tying when I was teenager. Later, as I met other fly tyers, I learned to refine and develop my technique even further.

They central point emphasized by Leiser that I completely agree with is:

Flies must look alive in the water

There are other factors, such as the appropriate size and color but whatever you construct; but if you want to catch fish, you have to produce something that will look alive when it moves through the water. This will arouse fish’s predatory instincts and entice them to grab the fly so you can set the hook, or even better the fish will grab the fly so aggressively, there is not even a need to set the hook.

You will need the following materials to tie the flies described below:

To save money, get fly-tying materials from a craft shop. Craft shops offer a multitude of materials which can be used for flies; yarn, rawhide strips, plastic floss and pipe cleaners for bodies, marabou, artificial hair, and feathers for wings, feathers for hackle, and many other options if you are creative.

If you hunt or know a hunter, you have another source of furs, tails and feathers.  Deer body hair, squirrel and woodchuck tails, peasant and partridge feathers are all widely used in fly tying.

The following tools will be needed:

Learn to fish. Learn to make your own flies to catch fish. It is a satisfyingly primal experience to catch a fish on something you have created with your own hands.

A freezer full of trout, salmon, crappies and perch can ease the grocery bill a little, or provide an emergency food source in the event of financial hardship, or a broader difficulty. It builds confidence and gives you more options, making you less vulnerable. In other words it is (gag) empowering. I hate using PC language, but that term really fits here.

The feeling of satisfaction of watching a fish ascending and grabbing your fly floating on the surface is tremendous if you are fishing for sport and you intend to return the fish to the water. If you are fishing in order to eat, that feeling will be even more gratifying.  Learning to tie your own flies is one more step toward becoming self-reliant.

We will not spam you.
Print
11
Shares

A Few Delicious Outdoor Cooking Recipes
So, How Many Calories are in an MRE?
Food storage recipes......Part 1