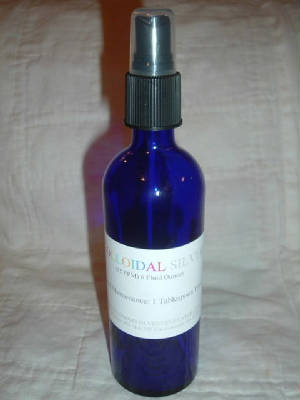 [From Rourke: The following article was previously published here on ModernSurvivalOnline. It can be seen in its original format HERE. ]

Have you thought about how  you will take care of yourself or your family if you can’t get to a doctor ?? Even with doctors available why do people lose limbs and lives because of the “flesh eating bacteria” There are answers and solutions that can prove to be beneficial in killing these types of super bugs. One indispensable product we use is called colloidal silver.

Colloidal silver appears to be a powerful, natural antibiotic and preventative against infections. Acting as a catalyst, it reportedly disables the enzyme that one-celled bacteria, viruses and fungi need for their oxygen metabolism. They are suffocated without corresponding harm occurring to human enzymes or parts of the human body chemistry, unlike antibiotics from pharmaceutical companies that destroy the good enzymes. The result is the destruction of disease-causing organisms in the body and in the food. The late Carl Moyer, M.D., chairman of Washington University’s Department of Surgery in the 1970s stated: “Silver is the best all-around germ fighter we have.” Not much has changed since then.

Colloidal silver snuggles up to bacterium or single cell pathogen and disables its oxygen metabolism enzyme (its chemical lung) and within 6 minutes the pathogen suffocates. It has been reported that when ingested, it takes colloidal silver three or four days to go to the body cells in an amount sufficient for benefits to begin, so prevention is key . We take a spoonful or two three times a week and we also add in extra good bacteria, like those found in yogurt, because silver can kill off the good bacteria as well as the bad !

Colloidal Silver has been successfully tested at the UCLA Medical Labs where it killed every virus on which it was tested and has been shown to be effective against 650 different disease-causing pathogenic microorganisms, and was tested against anthrax in 1997 by microbiologist Larry Harris. The ability to produce homemade, quality colloidal silver may be your first line of defense against disease-causing biological agents. All fungus, virus, bacterium, streptococcus,staphylococcus, and other pathogenic organisms are killed in three or four minutes; in fact, there is no microbe known that is not killed by Colloidal Silver is six minutes or less,in a dilution of as little as five parts per million, plus there are no side effects whatsoever from high concentrations. – (“Use of Colloids in Health and Disease,” quoted in “Report: Colloidal Silver,” Health Consciousness, Vol.15,14)

Colloidal silver in a spray bottle can be sprayed on abrasions, acne, athlete’s foot, burns, cuts, eczema, fungi, psoriasis, rashes, scrapes, skin cancers, sunburn, warts, and wounds, etc., and does not kill subcutaneous tissue as does alcohol and iodine. It can also be sprayed in the nose for sinus problems or sprayed into the mouth and inhaled to the lungs where transfer of colloidal silver through the alveoli is readily imparted to the blood. Colloidal silver can also be sprayed into the eyes of newborn infants to prevent infection, or under the arms, which kills odor-causing bacteria but does not prevent skin from

Water can be purified by adding two teaspoons of 30+ ppm colloidal silver to one gallon of water. Legion Ella pnuemophilia (Legionnaire’s disease) is lethal in water with a temperature of 95 degrees Fahrenheit but is killed when the water temperature is raised to 135 to 145 degrees Fahrenheit. Interestingly, water with a colloidal silver concentration of only 20 ppb (parts per billion) kills Legionella pnuemophilia. World Health Organizations’ Guidelines for Drinking Water Quality states “It is unnecessary to recommend any health-based guidelines for silver as it is not hazardous to human health.” Pathogens in water are killed by the addition of colloidal silver. Waste colloidal silver should not be dumped into drainpipes leading to septic tanks since bacterial breakdown action of solid waste would be impaired.

I bought my own silver generator from Economical CS, over a year ago and now I am the official family silver maker !! My solution usually runs around 12-15 ppm (there’s a tester you can use to verify the count). I fill a quart jar with distilled water and a pinch of sea salt, put the the generator with the silver rods into the jar and set the timer for 50 mins. I’ve made enough that I know I will get 12-15 ppm .  And this is sufficient for our needs.

We all use it as the first line of defense against any sickness that starts, and most of the time that’s the end of it. We take a small amount several times per week, gargle with it, use it as a nasal spray, travel with it, etc etc. It is in our grab and go kits and we store bottles for the long haul. I make up little squirt bottles from nasal spray and give them to the gran kids to keep in their pockets while their out playing and fishing. Any little scrap or cut they spray it first thing. One can but wonder if the outcome for that poor girl here in Georgia, who lost several limbs from flesh eating bacteria that was in the pond she fell into, would have been different if someone had a bottle of silver to pour into her wound when it happened.

One important note – if your making your own you MUST USE DISTILLED WATER. So store extra of it. Distilled water is “empty water”, it leaves lots of room for the silver!! Do your own research and know that having a supply of this amazing solution should be with you at all times. Do remember though that none of this information is being given as any medical advice, just personal observations.

5 thoughts on “Flesh eating bacteria – is there a ‘silver bullet’ ?”