With North Korea rattling its sabers and making threats against the United States – I wondered….“Could Red Dawn really happen?”  For those who may not know what I refer the remake of the 80’s classic Red Dawn features an EMP riddled north-western United States being invaded by North Korea.

I have watched the movie several times and from what I could tell there was some kind of preliminary strike which killed the power to much of the West Coast – then several hours later North Korean bombers and planes arrived in the state of Washington. Troops parachuted to the ground and began taking control of areas. It appears there is a minimal US military response as local military bases, also without power, were slow to react. With no phone service, with no method for people to communicate – chaos soon followed as people panic to understand what is happening. Within a short time the vast majority of the population is obedient to the invaders – except for a small group of young people who escaped into the countryside early on during the invasion.

Could this happen? Could North Korea cause a massive power outage in the northwest, killing all communications – both civilian and military and then carry out a sneak attack and invasion? My initial thought while watching the movie – “This is ridiculous.” 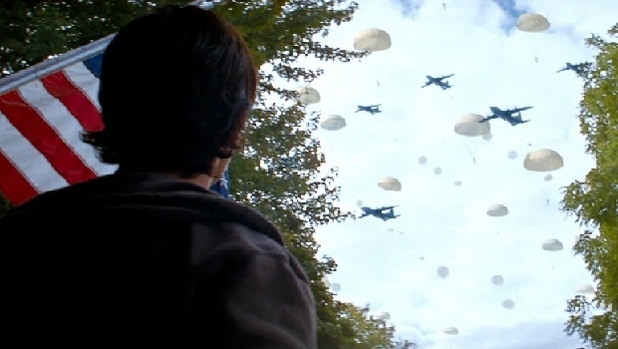 How do other countries compare? Considering just active duty  – the United States ranks #2 with 1.4 million active military personnel while China comes out on top with 2.2 million military.

So – as far as pure numbers – North Korea has an impressive military force.

Fighters: North Korea has several variants of fighters from older, out of date MiG-17’s to modern MiG-29’s.  The maximum range of  the MiG-29 is 1304 miles without refueling.

Bombers: North Korea’s bomber inventory consists mainly of II-28 bombers which are very old. These bombers have a maximum range of 1740 miles. The United States is more than 5000 miles from North Korea. With a maximum speed of 550 mph it would take more than 9 hours for North Korean bombers to reach the coast of the United States.

Other: North Korea operates a number of other aircraft including helicopters and ground attack models. From my research it does not appear that North Korea possesses any tanker aircraft which to provide refueling in the air.

The United States air power is far superior to North Korea in every aspect imaginable.

On the Sea – North Korea has military sea presence of some 700+ vessels including up to 100 submarines as well as destroyers, torpedo boats, fire-support boats, and guided missile boats. The vast majority of their vessels are very short-range and limited to coast patrol.

The majority of ships in the fleet have a very limited range. This range is so limited that they do not have the capability of navigating from one coast of North Korea to the other.

North Korea operates at least 20 Romeo class submarines with a range of 9000 miles. These submarines are generally considered obsolete and were built back in the 50’s to early 60’s.

Does North Korea have he capability to carry out a Red Dawn-style attack?

The short answer? No – it does not.

North Korea’s military is far too antiquated to launch any kind of attack/invasion from some 5000 miles away. Their aircraft and submarine technology is far too slow to gain access to the West Coast without substantial warning being given to the United States. Without the ability to refuel in the air no fighters and no bombers would be able to make the trip from the East Coast of North Korea to the West Coast of the United States. Additionally – the shear numbers of troops needed to carry out a Red Dawn-style invasion could not be transported to the US as there just are not enough planes in the North Korean inventory which to do it.

What about a non-Red Dawn style attack? Does North Korea have the ability to put a dent in the United States armor?

My answer – maybe, but not likely. Let’s look at a few possible scenario’s:

There are two questions that only the North Korean’s can answer:

The United States is not omnipotent. Regardless – the ability for North Korea to do much more than threaten is certainly in dispute and exaggerated AND under-estimated by many. They are an evil empire that should not be taken lightly.