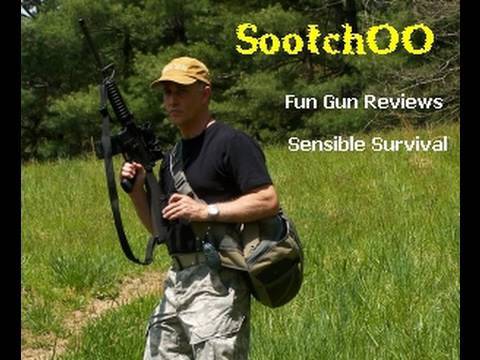 It is my pleasure to present an interview with Don (aka sootch00) – the owner of one of my favorite survival & preparedness YouTube Channels.

Sootch00 advertises the channel as “Fun Gun Reviews” and “Sensible Survival” – very accurate terms and describes the video’s well. I have been watching Sootch00 video’s for the past few months and have been very impressed. What I like most is to me Don’s video’s are meant for everyone. From beginners to those that have been deeply involved in preparedness for years can watch and get something out of it. I really appreciate some of his video’s that discuss today’s youth as well as some of his thoughts on life and current events today.

Rourke: How did you get involved in survival & preparedness?

Sootch00: Wow, that’s a hard one. My folks were raised by parents that lived through the depression. So they have a survival or Self Reliance bent which influenced me. Also being from a family with a strong Faith, many Prophesies tell of impending trouble in the last days. Couple that with Terrorist threats, the global Financial crisis, Natural disasters and you really start to think. But having three children really makes you consider your responsibility as a provider.

Rourke: What motivated you to start placing video’s on YouTube?

Sootch00: At first, it was an outlet to voice an opinion in a world gone mad, but then the questions started. I would get questioned from single mothers wanting advice on Self defense and how to protect her children, Desperate unemployed Fathers wanting to prepare for the crashing economy and no extra funds, people feeling isolated and not being able to talk to their friends and family about preparing for an unknown future. It’s now become a passion.

Rourke: What is your opinion on the state of this country today and where we are heading?

Sootch00: Our Manufacturing has gone, unemployment is out of control, our taxes are going up and Washington is refusing to listen to the people. People no longer trust our elected officials or the Media. The powers that be are trying to delay the inevitable which will make matters worse.

Rourke: I have seen more and more stories is in the main stream press about the new “modern” survivalists – regular everyday people that are starting to store extra food and buy guns. What is opening peoples eyes?

Sootch00: I think the world has a sense that something is coming and it’s just a matter of time.  Hollywood and reality TV has also been instrumental in planting that seed. Have you seen the Movie “Book of Eli”? The French Army was the largest in Europe in the late 1930’s, but the French people had an overwhelming sense of defeat way before Germany fired the first shot.

Rourke: What role do firearms play in survival & preparedness?

Sootch00: If it ever comes down to it, even the most civilized man will kill in order to feed his starving Children. Those who don’t prepare will be desperate to find food and supplies. Without a means to protect your hard work and preparation, it will be taken away and your family will be left without or worse.

Rourke: What do you think is the most significant threat to this country today – short term versus long term?

Sootch00: Short term, I feel a successful significant terrorist strike or major financial melt down could cause panic and widespread disruption in our society.  Long Term, I fear that the move toward a One World Government by those in power is the biggest danger to our country. Once we loose our Constitution to a “New World Order” we will loose our sovereignty as a nation and a people.

Rourke: What is your “philosophy” on survival & preparedness?

Sootch00: I believe in Sensible Survival. Prepping can be overwhelming to someone starting out. Incorporating your preparations in your everyday life makes it do-able. Doing a little bit everyday without placing a huge financial strain on your family is not so stressful. But this also means to follow through and be consistent by not over doing it.

Rourke: Watching your video’s it is obvious you have a profound belief in treasuring todays youth and getting them heading in the right direction – To what do you owe this belief?

Sootch00: The youth of the country are our Hope. I am a Christian and believe in giving of ourselves to make this a better world. I also have children of my own and am trying to prepare them for their own lives. Our youth today need guidance… not from the TV or Radio, but from good people who will help them to grow in the paths of life.  A friend told me once that he was fearful of bringing a child in this world but I told him that’s why I brought children into the world….to make it a difference. As long as there’s hope, we live. When we give up hope, we die.

Rourke: Any future projects with your YouTube Channel or anything else that you have planned that you would like to mention?

Sootch00: I am planning to get back to my preparedness series starting with treating Gunshot and Puncture wounds. I have a friend that’s a Paramedic and 1st Aid instructor for our county that will be joining me with sound advice for emergencies. Also starting back on my Sensible Survival series with an Adventure Bag that should be very useful and also Water purification ideas.