Many preppers and people living off of the grid raise chickens, ducks, geese and other foul for their consumption and for sale and/or bartering for what they need. Not only do they sell and trade the foul but they also utilize the eggs from those foul.

If you fall into the above category, have you heard about the outbreak of the highly pathogenic H5 avian influenza in domestic birds in the United States? I have heard very little about it on commercial news media. I started doing a little research and below is what I have learned.

Our government is very concerned about the Avian Flu Outbreak in the U. S. The virus has been detected in wild migratory birds as well as back yard flocks. The outbreak in the U. S. has only been detected in the northwest United States as of this time. Governmental officials are holding their breath because they believe that the Bird Flu outbreak in the U. S. has come from migratory birds flying south from Canada. Our government is hoping that migratory water fowl from Canada, that fly south in other flyways from Canada through the U. S. in route to Central and South America, do not carry the bird flu and infect more of the continental United States commercial and domestic flocks of chickens, ducks, geese and other foul.

The bird flu is spreading very rapidly with strains of the bird flu that have never before been seen in the United States before.

According to government sources, this bird flu outbreak that is currently in the United States, knows no true containment. Some migratory ducks appear to be able to live while carrying this strain of bird flu, thus spreading it to other fowl while migrating south for the winter. This is the reason why government inspectors are destroying U. S. fowl quickly as soon as the bird flu is detected in a flock. 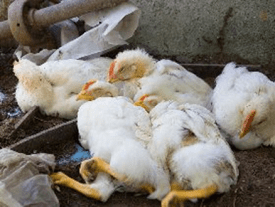 As of the writing of this article, the U.S.D.A., in the next week or shortly thereafter, could start going door to door, in some neighborhoods, inspecting backyard poultry flocks of fowl that they observe. It has already been determined that if the owner of a flock agrees to have their birds destroyed, the U. S. taxpayer would foot the bill to reimburse the cost of the birds destroyed to the farmer.

“According to the World Health Organization, Avian Influenza is an infectious viral disease that commonly spreads among domestic poultry such as chicken, duck, turkey and geese. While most bird flu viruses do not infect humans, certain strains like A (H5N1) and A (H7N9), have caused serious infections in people.” (2)

“The majority of human cases of A (H5N1) and A (H7N9) infection have been associated with direct or indirect contact with infected, live or dead poultry. Controlling the disease in animals is the first step in decreasing risks to humans,” World Health Organization. (2)

“Last week, the virus was detected in a backyard poultry flock in southeast Washington after previously showing up in wild birds in the northwest part of the state. British Columbia officials say an avian influenza outbreak has spread to more than a half dozen poultry farms and affected about 245,000 birds.” (2)

According to this same article, “One should be very careful while getting around farm animals or places where poultry is reared.” (2)

In people, “The preliminary symptoms of flu is similar to any other flu, including running nose, body ache, headache, high fever, sore throat, etc. The symptoms worsen with time and a person may experience respiratory problems, with intense cough and flu settling in the lungs. The condition may get severely chronic wherein a person may start coughing blood and may also fall prey to multiple organ failure.” (2)

“FDA (Food and Drug Administration, United States) and AIIMS (All India Institute of Medical Science) support the fact that there is no evidence that the disease can be spread to people through properly cooked food. However, one needs to make sure that the meat is not raw, uncooked or partially cooked. According to guidelines provided by various health organizations, poultry should be cooked for at least half an hour at 70 degree Celsius in order to ensure it to be safe for consumption.” (2)

I know, I have quoted a lot of information from the below two articles. I have done this because I believe the information is so critical that I did not want to pass along incorrect information.

“Our Constitution was made only for a moral and religious people. It is wholly inadequate to the government of any other”

Second President of the USA

Leave a Reply to The Coach Cancel reply