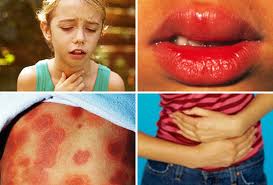 Rourke: This article can be seen here in its original format.

In a disaster or any other situation that leaves us off the grid, we will expose ourselves to insect stings and poison ivy, as well as strange food items that we aren’t accustomed to. Allergic reactions may ensue in susceptible individuals. When we develop an allergic reaction, it might be mild or it might be severe. If severe enough, we refer to it as anaphylaxisor anaphylactic shock. Anaphylaxis is the word used for serious and rapid allergic reactions involving one or more parts of the body which can become life-threatening.
Anaphylactic reactions were first identified when researchers tried to protect dogs against a certain poison by desensitizing them with small doses. Instead of being protected, many of the dogs died suddenly the second time they got the poison. The word used for preventative protection is “PROphylaxis”. Think of a condom, also known as a prophylactic. A condom protects you from sexually transmitted diseases. The word “ANAphylaxis”, therefore, means the opposite of protection. The dog experiment allowed scientists to understand that the same can happen in humans, and had application to asthma and other immune responses.

WHAT ARE THE CAUSES OF ANAPHYLACTIC SHOCK?

This allergic reaction can be caused by drug exposure or pollutants, but even ordinary foods such as peanuts can be culprits. Our immune system sometimes goes haywire when it acts to protect our body from an invading substance. In extreme circumstances, a person could go into shock.
Anaphylaxis has become an timely issue in because of the increased numbers of people that are experiencing the condition. Why the increase? When medicines are the cause, the explanation is likely that we are simply using a lot of drugs these days. Why foods should be causing anaphylaxis more often, however, is more perplexing. Could pollutants be an issue? For whatever reason, allergies such as asthma, food allergies and hay fever are becoming epidemic all over the world. The likely causes of anaphylaxis are:

Fumes from chemicals like Chlorine gas can be dangerous in their own right without causing an immune or anaphylactic reaction.

It’s important to recognize the signs and symptoms of anaphylaxis because the faster you treat it, the less likely it will be life-threatening. You may see:
• Swelling: can be generalized, but sometimes isolated to the airways or throat
• Breathing difficulty: wheezing is common as in asthmatics
• GI symptoms: diarrhea, nausea and vomiting, or abdominal pain
• Loss of consciousness: The patient may appear to have fainted
• Strange sensations on the lips or oral cavity: especially with food allergies
• Shock: Blood pressure drops, respiratory failure leading to coma and death Fainting is not the same thing as anaphylactic shock. You can tell the difference in several ways:
• Someone who has fainted is usually pale in color, but anaphylactic shock will often present with the patient somewhat flushed.
• The pulse in anaphylaxis is fast, but a person who has fainted will have a slow heart rate.
• Most people who have just fainted will rarely have breathing problems and rashes, but these will be very common signs and symptoms in an anaphylactic reaction.

WHY ANAPHYLACTIC SHOCK OCCURS
In food allergies, victims often notice the effects very rapidly; their life may be in danger within a few minutes. People who have had a serious anaphylactic reaction should be observed overnight, as there is, on occasion, a second wave of symptoms. This can happen several hours after the exposure. Some reactions are mild and probably not anaphylaxis, but a history of mild symptoms is not a guarantee that every reaction will be that way.
Why does our immune system go awry in anaphylactic situations? Anaphylaxis happens when the body makes an antibody called immunoglobulin E (IgE for short) in response to exposure to an allergen, like food or a medication. IgE sticks to cells, which then release substances that affect blood vessels and air passages. The second time you are exposed to that allergen, these substances drop your blood pressure and cause soft tissue swelling. The airways, however, can tighten and cause respiratory difficulty.
Histamine is a substance released in this situation. Medications which counteract these ill effects are known, therefore, as antihistamines. These drugs may be helpful in mild allergic reactions, but tablets, like Benadryl, take about an hour to get into the bloodstream properly; this isn’t fast enough to save lives in serious reactions. If it’s all you have, chew the pill to get it into your system more quickly. Other antihistamines, like Claritin, come in wafers that melt on your tongue, and get into your system more quickly, although the effect is also mild.
The same cells with IgE antibodies release other substances which may cause ill effects, and antihistamines do not protect you against these. As such, we look to another medicine that is more effective: Adrenaline, known in the U.S. as Epinephrine. The Epi-pen is the most popular of the various available injectable kits to combat anaphylaxis. It’s important to learn how to use the Epi-Penproperly. Click the link in the last sentence for a video on the subject.

You can cause more harm than good if you fail to follow the instructions. For example, Adrenaline (Epinephrine) can constrict the blood vessels if injected into a finger by mistake, and prevent adequate circulation to the digit. In rare cases, gangrene can set in. Also, remember that the Epi-Pen won’t help you if you don’t carry it with you or have it readily accessible.
Since it’s a liquid, Adrenaline (Epinephrine) will not stay effective forever. Be sure to follow the storage instructions. Although you don’t want to store it someplace that’s hot, the Epi-pen shouldn’t be kept in any situation where it could freeze, which will damage its effectiveness significantly. Store in dry, dark, cool conditions.
When is it appropriate to inject Epinephrine? An easily remembered formula is the Rule of D’s:
• Definite reaction: Your patient is obviously having a major reaction, such as a large rash or difficult breathing.
• Deterioration: Use the Epi-pen before the condition becomes life-threatening.
• Danger: Any worsening of a reaction after a few minutes.
Imminent danger is probably most likely if your patient has difficulty breathing or has lost consciousness. If you are ever in doubt, go ahead and give the injection. The earlier you use it, the faster a person will resolve the anaphylaxis. One injection is usually enough to save a life, but have more than one handy, just in case. This is especially pertinent when you are away from your base of operations.
Some people may not be able to take Adrenaline (Epinephrine) due to chronic heart conditions or high blood pressure. Make sure that you consult with your doctor now to determine that it is safe to receive an injection. Have the medicine available, learn the signs and symptoms, and you’ll stay out of trouble.

Learn more about anaphylactic shock and 100 other medical issues you might encounter in a disaster in our Amazon bestselling book “The Survival Medicine Handbook“, now with over 195 5-star reviews.

Also, check out Nurse Amy’s entire line of medical kits and supplies at our store at store.doomandbloom.net.