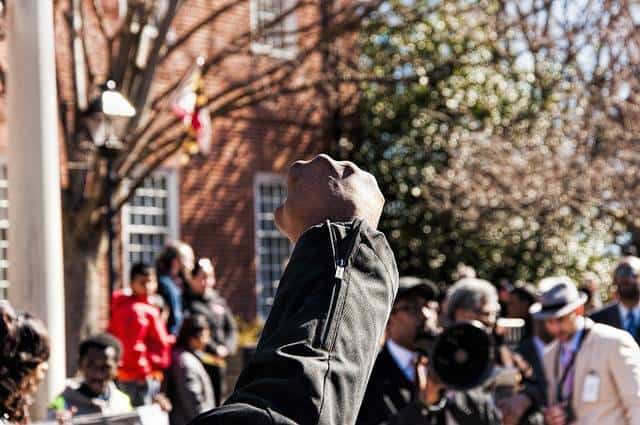 I would like to speak to all of the anti-Trump protesters that I see daily on my television screen after I return home from work each day. It appears to me that most of you are college students who range from 18-22 years of age, although I am aware that there are older, more ‘professional’ protesters among you as well. These are most likely the organizers and the demonstrators-for-hire who have found a way to make a living, floating from one city to the next in order to agitate the nation at a time when we should be trying to come together.

If you are one of the young, well-meaning, college aged kids reading this and you are able to make it all of the way through this letter without retreating to your ‘safe place’ where contradicting views are not allowed to penetrate to you and thus upset the delicate balance of your own belief system, perhaps you will see the world a little differently. If you never make it past this paragraph before you need to seek anger therapy, I would like to thank you for trying.

To begin with, I feel an obligation to tell you that you have been grievously cheated. I don’t mean cheated in the election. I mean slighted by your college professors but also by your parents. Do not be too hard on them, though, I’m certain that they love you and want the best possible world for you, they simply became swept up in the politically-correct world version of child rearing and, as we (parents) can see, it does not work.

You see, way back in the 1990’s when that old guy (the one married to Hillary Clinton) was President, a movement began. It seemed funny at first, even cute sometimes. It began with people, who have never lived in the real world, telling the rest of us what words we could use when we spoke to someone or wrote something. For example, we were told to say “Happy Holidays” instead of “Merry Christmas” so that we didn’t offend the small minority of people in America who are not Christian. A woman could no longer be referred to as such and should, at all times, be called a “female”. Global Warming was the new religion of the 90’s, though this would later be recoined as “Climate Change” when the error of boxing one’s self into a corner became clear. There were hundreds more.

Your parents most likely conceived you as most of this was taking shape and we came to learn that it does not take parents to raise a child, rather an entire village. So all of these centuries, parents had it wrong. You only needed neighbors! Being busy with their careers and wanting only the best for you, they doled out “time-outs” for punishment and told you that it doesn’t matter if you win or lose, you will get a trophy anyway. As the father of three girls, I understand it. There were certainly times when I wished I could have caved into those methods of child rearing and given my bright-eyed daughters trophies for everything they did (whether it was done well or not). They were so cute!

Also, while you were running around in diapers and learning phrases like “save the planet” and “you can’t say that to me”, doctors began giving concerned parents explanations for their children’s questionable behavior. Things like ADD became rampant throughout the suburbs as did a plethora of other acronyms. This, we were told, is why your child wears their pants below their butt and has run-ins with the police. It was okay, though, because they also gave us cures for these mysterious ailments. Fortunately, there were plenty of pharmaceutical companies (you know, the 1% of the population that are filthy rich) that wanted to make the drugs to control your condition. Prior to this we were ignorantly referring to such children as “delinquents”. The dark ages, indeed.

Then the 1990’s came to a close and after we had elected a new President, we were attacked. We were attacked by Islamic, Fundamentalist, Terrorists who killed 3000 of our own citizens, right here in America. That’s 3000 brothers, sister, mothers, and fathers, who never came home. Probably more people than you have as “friends” on Facebook! For a brief flicker of time we all came together as one country. You see true fear will do that to people. They suddenly huddle together and wait for someone to figure out what to do next.

On September 10th, the day before the attacks, we were discussing incredibly important topics in the news such as Slave Reparations and Global Warming (oops, sorry. I mean Climate Change.). On September 11th, as your parents were rushing to your school to scoop you up and take you home, we learned that there might have been some other topics that we should have discussed.

President George Bush was our President then and despite all of the odds, he managed to prevent any further attacks on our country. Let me say that again. None, in the 8 years that he was President. No soldiers killing soldiers on an army base, nobody making bombs out of pressure cookers, None. This allowed us to go back to focusing on things that really matter such as the spotted owl and shutting down coal mines.

So it was in this environment that you grew up. Believing that there are no losers and everyone is a winner and you must always, always, have things your way. With beaming hearts and pride in their faces, you parents then sent you off to colleges that would not only reinforce these beliefs but put them into practice. No longer did you have to listen to any contradictory ideas. What used to be a veritable think-tank of ideas and counter-ideas (college campuses) began creating “safe zones” and un-inviting any speaker with whom you might disagree.

As the current President, Mr. Obama, came into office things began to change for us (the middle-class worker). Suddenly the economy was having problems recovering from a nasty housing collapse, factories were flooding across the Mexican border so that they could make more money, and we had all kinds of terrorists attacking us, all of the time. You see President Obama, well-intentioned like your parents, thought that if we were all nice enough to mean-spirited countries who hated us, they would like us if for no other reason than we were nice.

Part of this plan was to turn blind eyes on efforts to make nuclear weapons by these countries and to deplete our military to historic lows in order to show them that we mean them no harm. It’s sort of like you laying your pencil down in the middle of a test when you realize you might finish faster than your classmates and you don’t want to hurt their feelings. Just like your classmates, the rest of the world labeled us as schmucks and the attacks came in earnest.

Four years ago, we (again the people who are too tired from work to run around the streets at night and destroy things) nearly changed the direction that the country was going in when a guy named Mitt Romney ran against President Obama. The problem was, his policies were not really that much different from the man whom we wished replaced. So most of the country agreed to just keep the one we had. It was close, mind you, but probably for the best. We prevented the unpleasantness of the two families having to relocate to different cities. In all likelihood, that would have been the only significant change.

It seems that both parties were unable to provide an honest, not in it for me, non-career politician. So you’ll have to forgive our enthusiasm when a party finally found a real outsider. You, most likely a Bernie fan, should understand that. The difference is that Trump, unlike Bernie, knows that nothing is “free” and that somebody (a.k.a. working, middle-class Americans) must pay for every promise that Bernie, and people like him, make.

You see, in our eyes, Trump has so much money it’s ridiculous to think that he would sell us out in order to make a mere 150 million dollars on the speaking circuit. This is important because it makes us think that for once, somebody might actually make decisions based on what is good for us, not some fringe, special interest group. Trump trying to make another 150 million at the expense of his legacy would be like you giving up Twitter to mail letters. Pretty unlikely.

I’m sure that in your economics class you were told what a terrific recovery our nation is enjoying but honestly, 1% growth per quarter = no growth whatsoever. The biggest desire that we (your parents) have is that we are able to fend for ourselves in our old age and not be a burden on you or have to accept hand-outs from the government. You see, once you graduate and presumably go to work every day for the next 40 or 50 years, you will also want to be able to keep the house you live in and not pay eternally for “free” college for other people’s kids.

One day you will go to work and you will begin to pay taxes. As you struggle to pay not only for your own hopes and dreams in this lifetime but also those of your children, you will understand this letter much better. You see, we cannot possibly continue to afford your tuition, your prescription marijuana, and your X-Box games if we continue to lose jobs in this country.

While it may seem to you that the world as you know it has ended keep in mind this is only because you don’t recall that when you were 8 or 10 years old, and we had a different President. Yet the country is still here for you to burn and slander.  Our founding fathers were very intelligent men and they formed a government unlike any that existed then or that exists now. It is loaded with multiple systems of checks and balances that ensure it will survive any one Presidential Administration. The office of the President is bigger than any, one person and always will be.

You may not like Donald Trump and there are many people who voted for him that do not necessarily want to invite him over for dinner. What you are missing, though, as you stomp your feet and throw bricks through other people’s dreams, is that this election was a reminder to our politicians that they work for us, all of us, not themselves and the people who pay their graft. This election was about the direction of our country, not which candidate can call the other one the worst name or which one has the most “star-power”. We traveled down that road while you were speaking with your school counselor about your hurt feelings.

So take my advice. Go back to college, study hard, and focus on what you can do to make your own life better. Our country will still be here after you graduate, find a job, and start your own family. Hopefully when that time comes you will teach your own children that everyone really is responsible for their own actions and that the party of “inclusion” really isn’t.

7 thoughts on “An Open Letter to College Protesters (from a middle-aged, middle-class, working guy)”