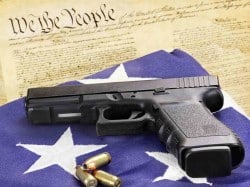 Top online criminal justice programs, police academies, and everything in between all teach that as guns are harder to legally buy so increases the illicit market and use of other weapons. This truth is often ignored by news media and groups critical of gun use, especially in the wake of sensational stories.

The recent shooting in Charleston have spurred talk on gun control all across the country. Often when a mass shooting gets a lot of press – “gun control” will be mentioned as something that could have prevented what occurred and what should be put in place to prevent future occurrences.

Let me start off by stating for the record – I support the 2nd Amendment to the Constitution. Period. I believe that our forefathers placed the right to bear arms into the Constitution for a reason – and it was not for the creation of our military and police forces. It also had nothing to do with hunting.

“A well regulated Militia being necessary to the security of a free State, the right of the people to keep and bear arms shall not be infringed.”

Knowing the history of how the United States came to be I firmly believe that the above statement refers to the ability of the people to possess firearms – not just the government. The citizens must have the ability to hold the government in check.

The mass shooting in Charleston was a tragedy for all involved and their families. It is an unfortunately reality that there are sick, crazy, malicious and evil people in this world with an intent that is no better than they are. The argument that decent, law-abiding citizens should have their rights affected due to those that are not decent, law-abiding citizens is unjust, unfair and against our Constitutional rights. Whether it be the Virginia Tech massacre or the Charleston shooting – those psycho’s that perpetrated these acts would do so regardless of any law.

The bottom line is that gun control laws only affect those that will obey them – law abiding citizens. Criminals are termed that for a reason – they break the law. How many drug dealers and gang-bangers are purchasing their firearms at local gun shops following laws?

Now – here is where I may stir a response from you. Over the years I have believed that some logical gun control and regulation is just responsible and common sense. I have no problem with a background check. I do not have a problem with certain age requirements. I can tell you that my opinions are changing and the requirements and/or obstacles to purchasing a firearm should be extremely minimal. If I want to own a suppressor – that is my right. If I want to own a fully automatic machine gun – why not? I am a law abiding citizen.

The problem with the gun control proponents is that if you give them an inch – they will take a mile. What I mean by this is every regulation, every law is one step towards their eventual desired goal – the banning of guns altogether. Not all gun control advocates want this – but a very large majority.

Being able to defend myself, my family, and my property goes beyond “God given” – it is built into the genetic makeup of the human species to protect that which is nurtured and cared for. For some political group, “cause” or politician to suggest that I am not allowed to possess a pistol that can shoot 17 shots or a semi-automatic rifle because I can affix a bayonet to it is not just pathetic – it is idiotic.

There are 40,000 people killed every year in automobile accidents. 40,000!! I don’t hear anyone suggesting cars should be banned. Hmmmmm…….

One final thought. What if someone with a Concealed Weapons Permit was present at Virginia Tech or in Charleston for either one of those shootings?