After getting home from a 12 hour work day, shoveled the snow off of your driveway and walks, and find that you are tired and hungry. You decide you want a plate of Nacho’s, so you make them for yourself. Just as you are walking to your couch to sit down and enjoy your Nacho’s while you watch the big game, your doorbell rings. You answer it and it is a neighbor from the next street. His power is out and asks if he could stay while it is being restored. You say sure, and invite him to watch the game with you. He sits down and the game gets going. A few minutes later your neighbor mentions how good your Nacho’s look, and smell. He then asks if he can have some. You only made a small plate and you don’t have any more Nacho makings to make more. He eye’s your plate waiting for a response. 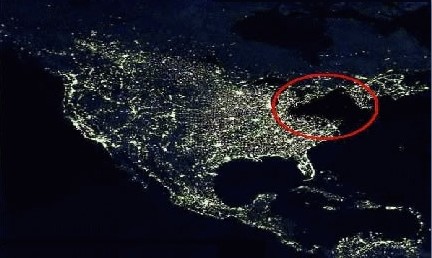 You apologize because you have been eating the Nacho’s with your fingers, and don’t have any more supplies with which to make more. Your neighbor asks if you have anything else because he is very hungry. You offer to cook up some spaghetti, and he looks relieved. You go into the kitchen and start preparing the food. As you are in there your friend makes a phone call on his mobile, and then returns to watching TV. He changes the channel and starts watching a movie. Just as you finish the spaghetti and serve up a plate, just as your doorbell rings again. Upon opening the door you find your neighbor had called to invite his family over for dinner. Since you had made spaghetti you server up all that there is to his wife and two kids. They eat and thank you for the food. While you are cleaning up after dinner you hear a newsbreak on your TV, which announces that the power outage is going to last for a bit and will be spreading to most of the area as it was due to damage done to your local power network by some misguided individuals. Just after the announcement your neighbor walks in and repeats the outlet. He is concerned because his house will not have a working furnace without the power. There is an uncomfortable pause after which your neighbor asks if they could stay there for the night. As he is asking the power goes out at your place too. You tell him that they can stay for the night, but they would have to go home in the morning, to which he agrees.

Through the night you hear some commotion outside, but stay indoors to keep warm. In the morning you arise to find your neighbors family eating breakfast at your table with no food left on the table for you. They apologize and say that their kids ate too much, and would be happy to make you some if you would like, but knowing you would have to go to the store you politely decline. You clean up the mess in the kitchen and walking back into your living room you find them all comfortably sitting at the table. You pull the father aside and remind him that they need to be heading out, as you need to get to the store. After a little more prodding, they leave begrudgingly. You look through your pantry, and find that much of your food is gone, and the wood you had stacked by the fire has all been burned to heat the living room. Now it is time to restock. Can you? Now let’s assume that the power does not come back on for the next couple of days.

Your neighbor returns a couple of days later and says that his power is still out. You remind him that yours is too. He says his house is very cold and they have no wood to burn to heat it with. He further says that his kids are hungry. You empathize with him, but remind him that his family has already consumed your food and wood, and you have nothing left to give him. You further remind him that you have not been able to go to the store because they closed the night the power went out. His desperation is apparent on his face, and in his voice. You tell him you are sorry and start to close the door, but he puts his foot in it. He demands to see if your lying to him, and questions your honesty, and Christian beliefs. You open the door and allow him in. He quickly pushes by you and walks into your kitchen to find the cupboards empty and the fridge open. His shoulders slump as he realizes that he was wrong. He turns and leaves. You close the door grateful that he hadn’t discovered your food storage, and wonder if he would have been even more upset if he had found it.

Would you do it again? Or for that matter, would you have done in the first place? You have provided shelter for your neighbor and his family, fed them two meals, and then cleaned up after them. They did nothing but ask for and expect more. How far off is this example from reality? I mean charity is a worthy pursuit, but I also believe that you give to those who are in need, not just those who want a handout.

I have been involved in a renewed emergency preparedness effort in my church, and have met all sorts of people with many different views on the subject. Thankfully, I have not met any who openly state that they will take what they need in bad times, but some of their attitudes seem a bit strange to say the least. There are even some who say that they are preppers, but it seems that they always want something from members of the congregation. For instance, Mom will be out of town on business or what not, and they will need their meals brought in for the two teenage Eagle Scouts, and Dad who is home in the late afternoon daily. How will these people survive when times are bad, when they can’t even provide for themselves when mommy is away for a couple of days? Even more surprising is that the notification for help is not a request, it is just that. It is a notification that meals should be provided at 5 pm daily. It is expected. I am thankful that this form of thinking is just foreign to me and my family. Expecting others to provide for us? No my job is to provide for the needs of my family and to teach my family to provide for their own needs. I do teach them charity and to love our neighbors as well, but to recognize need and sloth for what they are.

Then there are those who say that “it would be nice to have food and supplies stocked, but they don’t have the money to do it”, but they make that trip to Disneyland every year, have those season passes to ski resorts, or maybe spend the summer traveling the tristate area with their kids so they can play Lacrosse. Will that feed, or defend their family in bad times? I am thinking no, but maybe that is just me. These people do take comfort though in the ‘fact’ that when bad times happen they can rely on FEMA, or their local government Emergency Responders. I wonder if they have ever read what FEMA tells people to do in case of an emergency or disaster. I believe it is something like “Make a plan, get a kit, be prepared.” And when you read on their website and in their literature, they further say that you be prepared to make it on your own for a “PERIOD OF TIME”. They don’t say what period of time it is, but if Katrina is any indicator, then that time would be for about a week. That means that before they are able to turn over the safety of their spouse and children to someone else so they can rest at the local FEMA Shelter, they must have enough ‘stuff’ to supply for a week. Of course that will depend largely on what type of event has occurred.

In 1991, when I lived in LA County, there wasn’t time for a friendly FEMA facility to be set up, and if it would have been, it would have likely been burned to the ground. Of course Emergency Responders were not really going into the dangerous areas anyway. That would be the areas, where people were that needed help. My neighbor was ‘lucky’ enough to be a resident of ‘Nahlins’ and was forced to relocate to one of the Emergency Shelters in the aftermath, “for her own protection”. During this stay at the local Shelter, she was assigned a cot in the middle of a gymnasium full of cots, but no privacy. She was given food and water when it was available, and was able to take long cold bath’s out of a sink in the bathroom sink using baby wipes she always carried. She found privacy by putting a large opaque, thin painter’s tarp over her cot with her under it. Her only change of clothes was a t-shirt she kept in her purse. They separated children from Parents, and many of the children were then relocated further away to ‘better provide for their safety and needs’. In some cases it took weeks to months to even locate their children afterwards, and until parents provided physical proof of relation, they couldn’t get their kids back. That sounds just wonderful, doesn’t it? My friend fared better than most, but did endure listening to two sexual assaults that occurred at the shelter.

So to those who feel that they don’t need to prepare for anything because they pay their taxes and that is all the preparation they need to take, what do you say to them? For me I say that they are ‘ENTITLED’ to whatever they get. To their children, I say “You deserved better”.